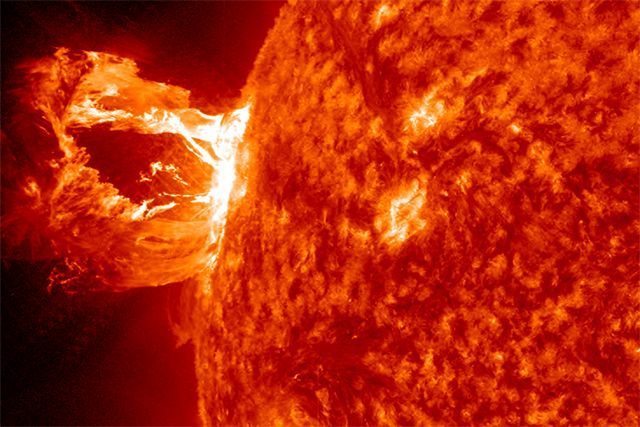 AND THOUGHTS ON “HUMAN HUBRIS …”

|| By FITSNEWS || We got a lot of grief for our recent post mocking the latest global warming conspiracy theory (which holds that eating meat is bad for the environment).

It isn’t … but try telling that to the bureaucratic enviro-Nazis desperate to keep the “climate change” ruse going at all costs.  Actually … on second thought … don’t try telling them that.  As we’ve noted previously, you can’t argue with supporters of global warming because all they see – everywhere, in everything – is validation of their theory.

We recently stumbled on some information that we think puts this debate in its proper context.  According to a post from analyst Paul Dorian of Vencore Weather, a big driver of global temperatures is … hold the phone … the sun.

“Solar activity has been very low and one measure of solar activity – its X-ray output – has basically flatlined in recent days,” Dorian wrote last week.

The sun is currently in what’s called Solar Cycle 24.  Every eleven years or so, there will be a peak (or a few peaks) in sun spot formation – which are huge magnetic storms on the sun’s surface that spew “mass coronal ejections” of hot gasses into space.

And while these “mass coronal ejections” are 93 million miles away from earth, they play a significant role in determining how hot or cold it gets on our planet.

Solar Cycle 24?  It kicked off back in January 2008 and experienced its first peak in 2013.  But the sunspot activity associated with the current “Solar Maximum” is nowhere near as intense as the Solar Cycle that preceded it.

In fact, here’s a chart from the National Aeronautics and Space Administration (NASA) showing the difference …

“Not since cycle 14 peaked in February 1906 has there been a solar cycle with fewer sunspots,” Dorian wrote.  “We are currently more than six years into Solar Cycle 24 and today the sun is virtually spotless despite the fact that we are still in what is considered to be its solar maximum phase.”

“It is safe to say that weak solar activity for a prolonged period of time can have a negative impact on global temperatures in the troposphere which is the bottom-most layer of Earth’s atmosphere – and where we all live,” Dorian continued.  “There have been two notable historical periods with decades-long episodes of low solar activity. The first period is known as the ‘Maunder Minimum,’ named after the solar astronomer Edward Maunder, and it lasted from around 1645 to 1715.  The second one is referred to as the ‘Dalton Minimum,’ named for the English meteorologist John Dalton, and it lasted from about 1790 to 1830.  Both of these historical periods coincided with below-normal global temperatures in an era now referred to by many as the ‘Little Ice Age.'”

The takeaway?  There are bigger things impacting the earth’s temperature than man-made pollution.  Much bigger things.

“Global warming boosters have this unbounded hubris that it is humans who control nature, and that human activity can terminally despoil the planet as well as cause its salvation,” Southwestern Law School professor Joerg Knipprath wrote back in 2009 (before the latest Solar Cycle).

Again … this website believes in the Biblical notion of stewardship.  We believe in maximizing natural resources (recycling and reusing them wherever possible) and exploring alternative forms of energy creation.  Additionally, we support a limited role for government in the protection of these natural resources (although we adamantly oppose the subsidization of certain sectors of the “energy economy” at the taxpayers’ expense).

And we oppose the chronic overreach of U.S. president Barack Obama‘s Environmental Protection Agency, just as we also oppose global wealth redistribution in the name of “fighting global warming.”  If for no other reason than recent data would indicate global warming isn’t happening.

“In the final analysis, our most basic common link is that we all inhabit this small planet,” former U.S. president John F. Kennedy said in June of 1963.  “We all breathe the same air. We all cherish our children’s future. And we are all mortal.”

Indeed … and we all have an obligation to leave future generations with a better planet than the one we inherited.

In fact within this basic desire is the very heart of this issue: The existence of a market for environmentally friendly products and services.  One that, if permitted to breathe free, could have a far bigger impact on creating a “better planet” than government over-regulation and wealth redistribution.