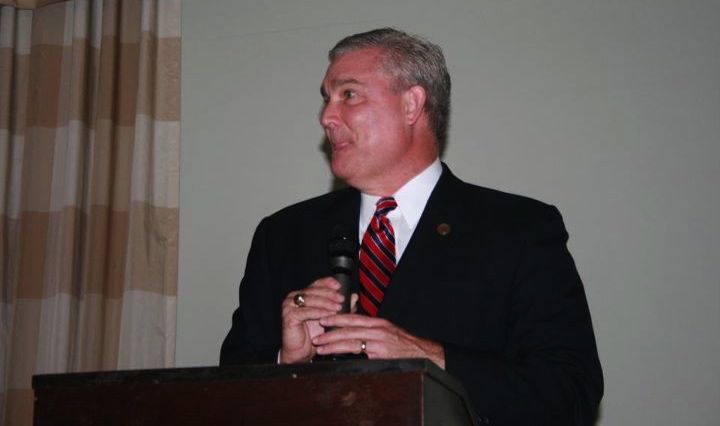 S.C. “Republican” Party chairman Chad Connelly will coast to reelection this spring when the cranially challenged hypocrites who comprise the membership of his party gather for their annual convention.

Oh well. The stupidity evidenced by this establishment hack is good news for our website, which gets to report on a pending lawsuit against the SCGOP chairman (and the party itself) in the wake of an ill-advised email blast implying his political opponents were terrorists.

“As we close in on the end of our conventions and in light of the world in which we live where terrorists try their best to blend in with our culture, we cannot take anything for granted and cannot allow ourselves to associate with people who rant endlessly hateful stuff,” Connelly wrote.

Connelly then specifically identified a party activist by the name of Brian Frank, who is said to be in league with Samuel Harms – Connelly’s opponent in the SCGOP chairman’s race.

“I want to warn those of you in upstate meetings where I have seen this person that you do not need to let him near your meetings,” Connelly continued. “On a related note, Brian Frank has threatened me and my family in the past and he is the primary Facebook, twitter, email and text person supporting Sam Harms.”

Frank – who is raising money to sue Connelly for slander as a result of the email – is definitely no saint. He’s posted some vile anti-Semitic nonsense to his website in the past (he claims it was for “informational” purposes) and based on the barrage of emails, tweets and other communication we’ve received from him pressuring us to write on this topic, it seems clear that (like most South Carolina “Republicans”) he’s more than a few bricks short of a full load.

But does that make him a terrorist? Or deserving of being compared to terrorists?

According to Connelly (who is thick as thieves with fear-mongering U.S. Sen. Lindsey Graham), the answer appears to be “yes.”

Again, none of this is going to remotely impact Connelly’s reelection bid – but it is good copy, as well as the latest example of a South Carolina “Republican” demonstrating a total lack of understanding of the Art of War.