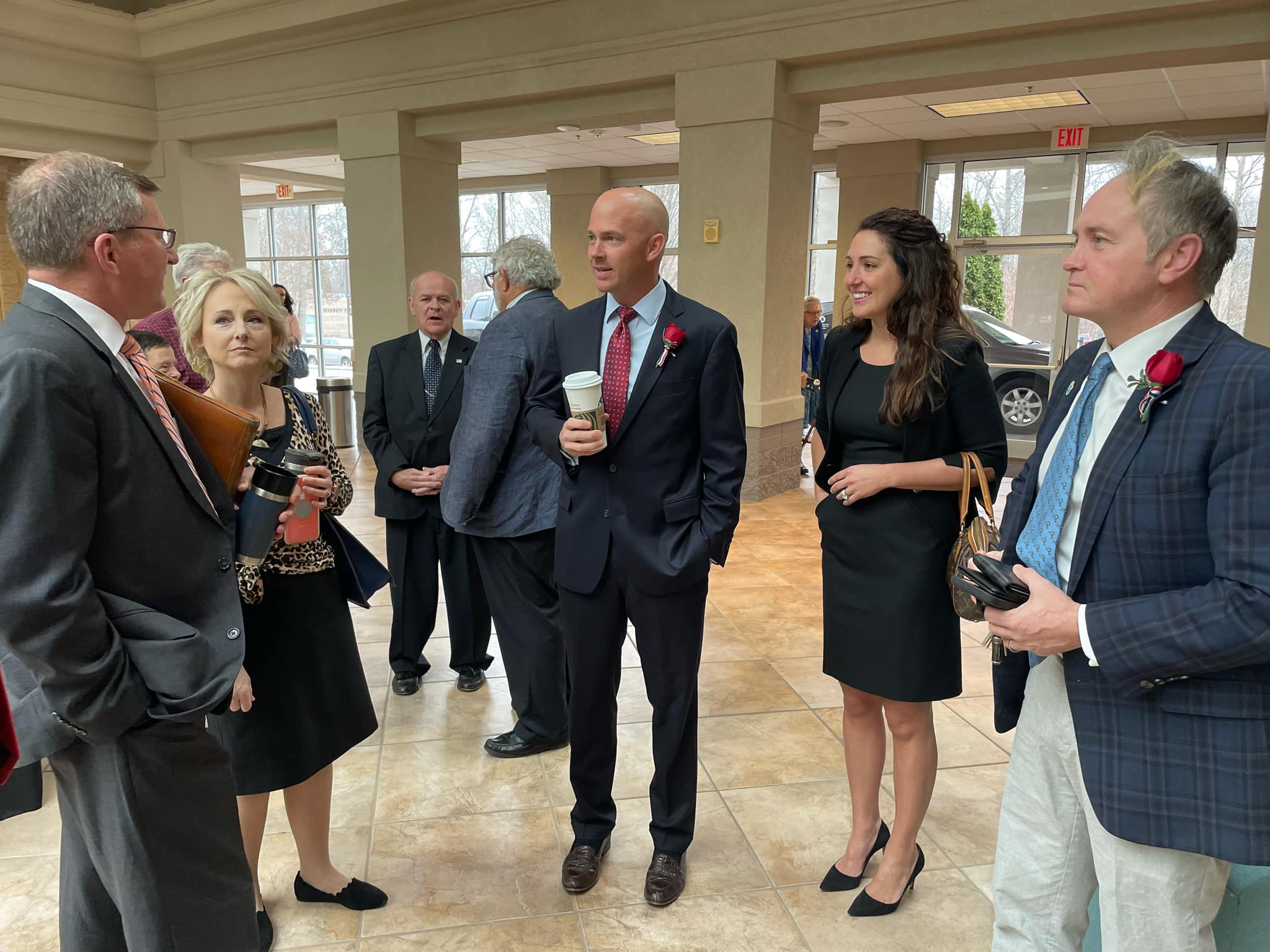 Ever since he issued a terse, 18-word statement last Sunday in response to inquiries about an alleged extramarital affair, things have gone from bad to worse for U.S. congressman William Timmons.

To be clear: Timmons wasn’t exactly “settin’ the woods on fire” in the Palmetto State’s staunchly Republican fourth congressional district – which includes the socially conservative Greenville and Spartanburg metropolitan areas. In fact, a pollster recently shared data with me suggesting that a plurality of GOP voters in this evangelical hotbed thought U.S. congressman Jeff Duncan – who represents the neighboring third congressional district – was their representative in Washington, D.C.

Timmons’ shaky political standing was reaffirmed last month when he narrowly averted a runoff against a trio of underfunded, comparatively unknown challengers in his bid for a third term in congress – drawing a modest 52.69 percent of the vote in the 2022 GOP primary election.

There were also scandals long before the alleged affair … and whispers of his purported proximity to other scandals.

For the most part, though, Timmons has been an afterthought. His reelection campaign this year was drowned out by competitive proxy wars between former U.S. president Donald Trump and his establishment GOP rivals in the state’s first and seventh congressional districts along the coast.

No one was watching the fourth district. Trump endorsed Timmons for a third term, incidentally, calling him a “terrific advocate” for the Upstate as well as “a steadfast supporter of our America First agenda.”

As I noted in my original treatment of this saga – one I had no intention of covering before Timmons decided to address it publicly – the 38-year-old attorney/ businessman is part of a five-generation institution in Greenville.

Timmons great-grandfather – William R. Timmons Sr. – built an empire in the Upstate beginning in the mid-1920s, focusing on the real estate, trucking and insurance industries. The family – which helped establish and maintain Greenville’s civic and philanthropic communities – is reportedly worth hundreds of millions of dollars.

A big chunk of that fortune is now squarely in the sights of Ron Rallis, a commercial real estate developer whose wife – Paula Dhier – has been accused of being Timmons’ mistress.

Dhier (above) is an interior designer who joined forces with her husband seven years ago to build a massive portfolio of homes and commercial properties – and a successful home-lifestyle franchise to boot.

According to an October 2021 profile in South magazine, Dhier “has forged her empire from Charleston through Las Catalinas.”

“Between her modern aesthetic and perfectly curated feed is a businesswoman, mother and wife – sharing her life and creating a social community based on authenticity,” noted author Lauren Flemming.

This community built on “authenticity” helped subsidize an idyllic lifestyle for the wealthy couple – who would regularly jet-set from Costa Rica to Charleston or from Greenville to the Hamptons.

Dhier routinely engaged her audience (182,000 Instagram followers as of this week) on a more intimate level, too.

“There is much more to the woman behind (Dhier) than beautifully curated squares of stunning locations and dreamy interiors,” Flemming noted. “(She) has shared some of her most personal moments with her following, including her recent struggle with infertility. Her social media platform has given her a direct line to connect with women across the country and the world on a deeper level, creating a community of meaningful conversation and interaction.”

Dhier and Rallis eventually had a daughter, Sterling, with the support of a surrogate.

So … where, when and how did things go wrong with this perfect couple? When did she begin her alleged affair with the married congressman? Also … what is the status of Timmons’ relationship?

Does the ‘family values’ lawmaker plan to reconcile with his wife, Sarah Timmons? And how will his handling of the scandal (for better or worse) impact his political future?

Sources familiar with the situation told me Timmons and his wife were traveling to Italy together in the hopes of reconciling their marriage at the moment the congressman issued his bombshell statement. Timmons left his wife in Italy shortly after the news broke.

Cue a real-life spinoff of the 2003 Diane Lane hit Under The Tuscan Sun, right?

A source familiar with the split termed the couple’s relationship status as “irreconcilable,” but declined to elaborate further.

The Timmons were married on the Robert J. Dole balcony of the U.S. Capitol on July 17, 2019 – almost three years ago. U.S. senator Tim Scott officiated at the ceremony – which was held six months after William Timmons was sworn in as a member of congress.

Prior to his congressional career, Timmons spent two years as a state senator.

Sources close to the situation told this news outlet Sarah Timmons had previously caught her husband having “multiple affairs” during the three years since they were married.


This news outlet has been provided with numerous intimate details of Timmons’ alleged affair with Dhier – which, again, was not something I had any intention of covering prior to his public statement. Among the information we have been provided? Screen shots of text messages purportedly sent between the two lovers in which the congressman clearly acknowledged the relationship – referring to Dhier as the “love of my life.”

In another message, Timmons told Dhier he was sending her money to take care of her and her daughter – an offer some have interpreted as “hush money.”

Multiple sources told this news outlet Dhier shared these screen shots directly with them – and with Sarah Timmons.

While Sarah Timmons has kept a low profile since the story broke, Rallis has made it abundantly clear he is out for blood in the aftermath of his wife’s alleged dalliance.

“Gloves are off,” Rallis (above) wrote in a post to his Instagram feed over the Fourth of July weekend. “(A)nyone with information on Paula or William please send me. I’m coming for both of you! And just so you don’t have me arrested again as a threat, I’ll be coming for you through lawyers while I’m on the beach in (the) Hamptons.”

Rallis’ message referenced a 2021 arrest in Greenville County for second degree criminal domestic violence. That charge is no longer listed on the public index for the S.C. thirteenth judicial circuit, where Timmons spent four years as a domestic violence prosecutor prior to embarking on his political career.

This news outlet has reached out to the office of S.C. thirteenth circuit solicitor Walt Wilkins in the hopes of learning more about the disposition of this charge.

“Then they go and hire William’s friend, a House of Representative to represent Paula’s lies and take my daughter!” he wrote.

Bannister declined to comment for this story. He did confirm the description of himself as a friend and political ally of Timmons – although that hardly makes him unique among elected officials and attorneys in the Greenville area.

Rallis posted another Instagram story on Saturday – a text message from a source who encouraged him to reach out to this news outlet to discuss “all the atrocities you have been put through.”

“I don’t want to hurt anyone, I just want them to stop hurting me,” Rallis responded.

He did, however, issue two demands related to the inevitable court dramas likely to proceed from two such high-profile divorces.

“I only want my daughter and $20mm from Timmons,” Rallis wrote.

Things escalated from there, with Rallis posting multiple screen shots of various messages received from friends of the estranged couple(s) – along with his unfiltered responses to these missives.

As Rallis plots his legal and financial jihad against Timmons, the congressman is reportedly encountering extensive backlash from family and friends for his alleged behavior with Dhier.

“William’s facing tough times for sure,” a source close to the situation told me. “But he got himself into this mess. I don’t have an ounce of pity for him.”

“I hate to see his family going through so much right now – but that’s just another reason I can’t believe he did what he did,” the source added.

And as for Sarah Timmons?

“She’s beautiful, kind, incredibly intelligent, and doesn’t deserve any of this,” the source said.

Politically, Timmons is facing an open revolt from several of his most important donors and political allies in the aftermath of the story breaking – i.e. the very last thing he needed after limping across the finish line in last month’s GOP primary election. While he is in no danger of losing his seat in the November general election, I would expect a pitched battle ahead of the 2024 GOP primary election.

(Via: Timmons for Congress)

“He will be challenged,” one advisor representing a prominent Upstate elected official told me bluntly on Monday afternoon. “But that was happening anyway.”

Again, as I noted in my original treatment of this saga, my news outlet has a long-established, widely known policy of not reporting on the interpersonal extracurriculars of Palmetto State politicians.

Generally speaking, unless an elected or appointed official is engaged in criminal activity during the course of an affair, using government money or resources in the furtherance of an affair or making official decisions (promotions, appointments, pay raises) based on an affair … I do not care who they are sleeping with.

The only other possible “angle” compelling coverage of such a dalliance would be if there were some demonstrable hypocrisy – i.e. an official campaigning as a pro-family social conservative or endorsing government as an instrument of morality (but then turning around and behaving explicitly counter to these stated principles).

Or, in this case … if the official in question unsolicitedly went on the record.

Anyway … it looks as though South Carolina (the state which brought us Mark Sanford and Nikki Haley) has another major political sex scandal on tap.

BANNER VIA: Timmons for Congress

Roe’s Reversal Is A Result Of The Left’s Excesses