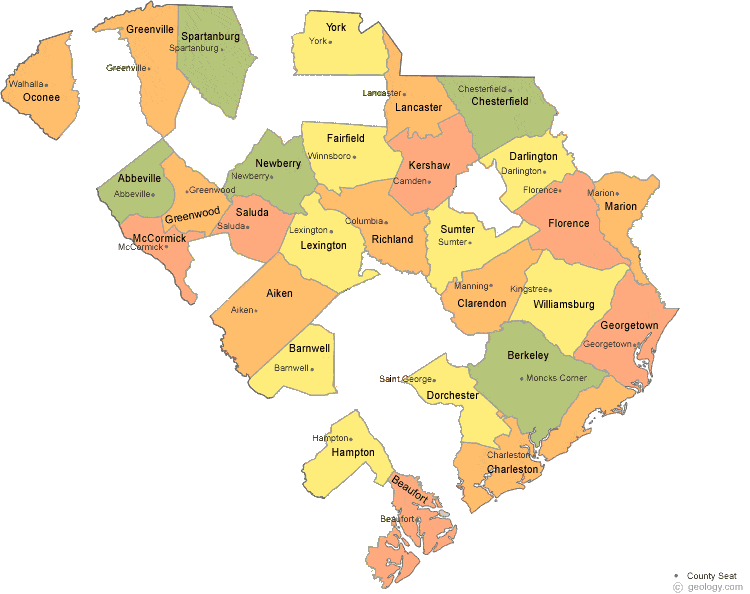 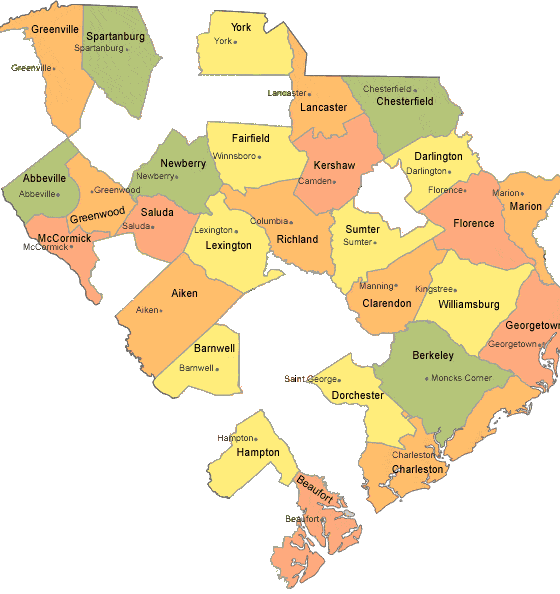 The results so far have been fascinating…

In a highly-entertaining chain of Reddit posts, people on the Internet are voting to “delete” their least favorite South Carolina counties — and the results have been fascinating.

For the last 15 days, a Reddit user has posted a thread every morning asking people to post which S.C. county is most deserving of deletion and the county mentioned in the comment with the most upvotes (which are “likes” in the Reddit world) gets cut.


The posts are loaded with an absurd amount of unfiltered information and compelling tidbits on some of the state’s most interesting corners.

As you can see from the map above, the Upstate is by far hardest-hit area of the state with several counties deleted.. so far.

Here is everything you didn’t think you needed to know about the first 14 counties to get “deleted.”

Much to no one’s surprise, Horry County, home of the Dirty Myrtle, was the first to get annexed.

“Myrtle Beach is not popular among South Carolinians. If you live here, you know where the actual beaches are,” one person said. “Only Ohioans and spring break chads like Myrtle.

“Locals call it the Dyrtle, short for Dirty Myrtle,” a Reddit user said. “We make fun of it for being the gift shop of SC (a little sleazy, low quality, everything is overpriced, and you don’t know who’s kid is running around screaming).”

Chester County — where a fugitive charged in four murders was just caught — was voted the second South Carolina county to delete.

Chester has been rocked by controversy in recent years. Its former sheriff was just convicted of several corruption charges. He was the 13th South Carolina sheriff to be convicted of a crime in the last 10 years.

Pickens County — where a woman set herself on fire while hoarding gasoline during the temporary gas shortage earlier this month — was third to go.

The woman who accidentally set herself on fire survived, by the way, but Pickens’ reputation did not.

“Pickens is a black eye on the Upstate!” one Reddit user said.

Lee County — which was called “a rusty tractor with a zipcode — was next to get the boot.

Some fought for Lee County — it’s is home to a buffet-style KFC (a top-rated restaurant on the Bishopville TripAdvisor page), a button museum, and, of course, the legend of Lizard Man.

Lee County also is one of the most obese and poorest counties in South Carolina.

Dillion County — home of the state’s wonkiest tourist trap South of the Border — was the fifth county in South Carolina to be voted off the Island.

“The most notable thing about it is a decrepit tourist trap that’s way problematic,” a Reddit user said about Dillion County (the second poorest county in South Carolina).

Laurens — where the self-proclaimed “World’s Only Klan Museum” stood until 2012 — was the seventh county to get cut.

Commenters mentioned that while Laurens County history is bad, its present isn’t much better. Recently, former sheriff Ricky Chastain (a.k.a. the sexting sheriff) gained infamy by impregnating a co-worker and driving her to Charlotte, N.C. for an abortion (in his patrol car).

Next up, Union County,”home of child killer Susan Smith,” was kicked out.

“How was Union not first up?! Place is like the third world county of SC.”

Others said Union was “nothing but red mud and cows” and “a bunch of crack heads.”

Like a lot of the counties on this list, Union has had recent sheriff troubles. Suspended Union County Sheriff David Taylor was indicted on multiple charges last year.

Union is also the 15th poorest county in South Carolina.

After the Upstate was nearly gutted, voters chose Orangeburg County as the ninth county to go.

“The amount of crackheads, racists of all colors, abandoned buildings, dilapidated trailers, horrible roads/drivers and dumpster-worthy food is astonishing,” a commenter said. “Most nights I pray that I fall victim to a stray bullet from some complete trash human who fires off their gun repeatedly and aimlessly in the middle of the night, just to put me out of my misery. F*cking nuke this county.”

Orangeburg is the eighth poorest county in South Carolina. If you’ve driven I-26 between Columbia and Charleston, you’ve been to Orangeburg County.

“Absolute worst part of driving to Hilton Head is having to go through that sh*thole county,” another commenter said of Orangeburg.

Anderson County was the ninth county to get nixed.

Why? Well several people claimed they got ticketed in Anderson County.

Other reasons were more personal.

“A stripper from Anderson stole money from me in college. I didn’t even go to a strip club, I was at f*cking Waffle House and she sat down with us randomly….We weren’t even IN Anderson! The county just reached out to f*ck up my night.”

Calhoun County — which apparently has a lot speed traps — was the the 10th county to sink.

Calhoun is located just southeast of Columbia, and is also pretty unavoidable to anyone driving between Charleston and Columbia.

A lot of people took issue with the county name — which is after late U.S. vice president John C. Calhoun, who was an outspoken supporter of slavery.

Cherokee County — home of Kevin Spacey’s fictional character in “House of Cards” — was the 11th county to get cut.

“Cherokee County set the bar so low that James Cameron filmed The Abyss there,” one person commented.

Another person said that the giant peach was the only upside of Cherokee County “and only because it looks like a giant butt.”

Also, the bungled I-85 construction disaster (projected to last until 2023!) contributed to Cherokee County’s early boot. It also has the lowest vaccination rate in SC.

Marlboro — the county with the lowest percentage of people with a degree — was the 12th county to get chopped off.

Named after the Duke of Marlboro, the county was picked because there is “nothing there” and people hate driving through it.

Some advocated for the Pee Dee county because comedian Aziz Ansari was born in Bennettsville and attended Marlboro Academy.

But it wasn’t enough.

“Oh, I love that guy. But some sacrifices have to be made,” one person said.

Allendale County — the poorest and smallest county in the state — was 13th on South Carolina’s doom list.

“This place has nothing to offer,” a Reddit user said of Allendale. “Sh*t infrastructure, sh*t schools, no industry. This place is a human wasteland. Get it off the map today!!!!!!”

Allendale County is apparently home to some (allegedly) shady politicians, too.

Earlier this month, an Allendale town councilman accused of sexually assaulting a child in her sleep was arrested and charged. Two other Allendale politicians recently pleaded guilty to stealing federal funds.

Edgefield County — home of “tacky McMansions” and Irish Travelers — was the 14th county to be deleted.

“Edgefield County is the home of Preston Brooks, Ben Tillman, Strom Thurmond, and a whole bunch of other prominent racists and terrible people,” a Reddit user commented. “It’s long past time for Edgefield to go.”

“The fact that I went to Strom Thurmond High School is enough to kick Edgefield out and yet I’m slightly saddened to see it go,” another person said.

Some did argue that the scenery in Edgefield is nice, but it wasn’t enough.

“They also have a prison where Larry Lawton was mistreated when he was serving time there,” one person added.

Bamberg — the third smallest county in the state — was the 15th to get kicked off the map (sorry Justin Bamberg)..

Reddit users listed a number of reasons for deleting Bamberg County — starting with the city of Bamberg’s disastrous urban planning on Main Street.

“The town of Bamberg killed itself. It is an example of how to not urban plan,” a Reddit user commented. “We should just remove the whole county.”

Colleton County — home of “tractor smoke and depression” — was the 16th county to be deleted.

“It’s a swamp full of crooked cops and alligators,” one reddit user said.

Jasper County — one of the only counties on this this list with an increasing population — was the latest to get the axe.

“Jasper needs to go. As the antivaxxer capital of SC you may as well be looking for herpes injections if you go there,” a Reddit user said. “Plus, this journalist covering the county deletions lives there, so let’s show her what we think of her coverage.”

Lots to unpack there…

First of all — I do not live in Jasper County as my bio at the end of this article clearly states.

For the record, the Reddit user who made this hilarious (but partially untrue) comment reached out to us, and said they enjoyed the article so much, they wanted to incorporate it in the next post.

Jasper is one of the least vaccinated counties in the state.

Jasper County also recently had sheriff troubles. Their former sheriff had a “significant credibility problem” —which this news outlet exclusively exposed — and apparently some girlfriend problems too. Like his county, he was voted out last year.

Well then, the people have spoken and the map looks like this…. (so far)

And it looks like Greenwood is next on the chopping block…..

FITSNews will keep an eye on this thread until the last county is picked. Stay tuned….

NOTE: A previous version of this story said that Bamberg County was voted off as No. 15. This was an error and the writer apologizes to the people of Bamberg County.