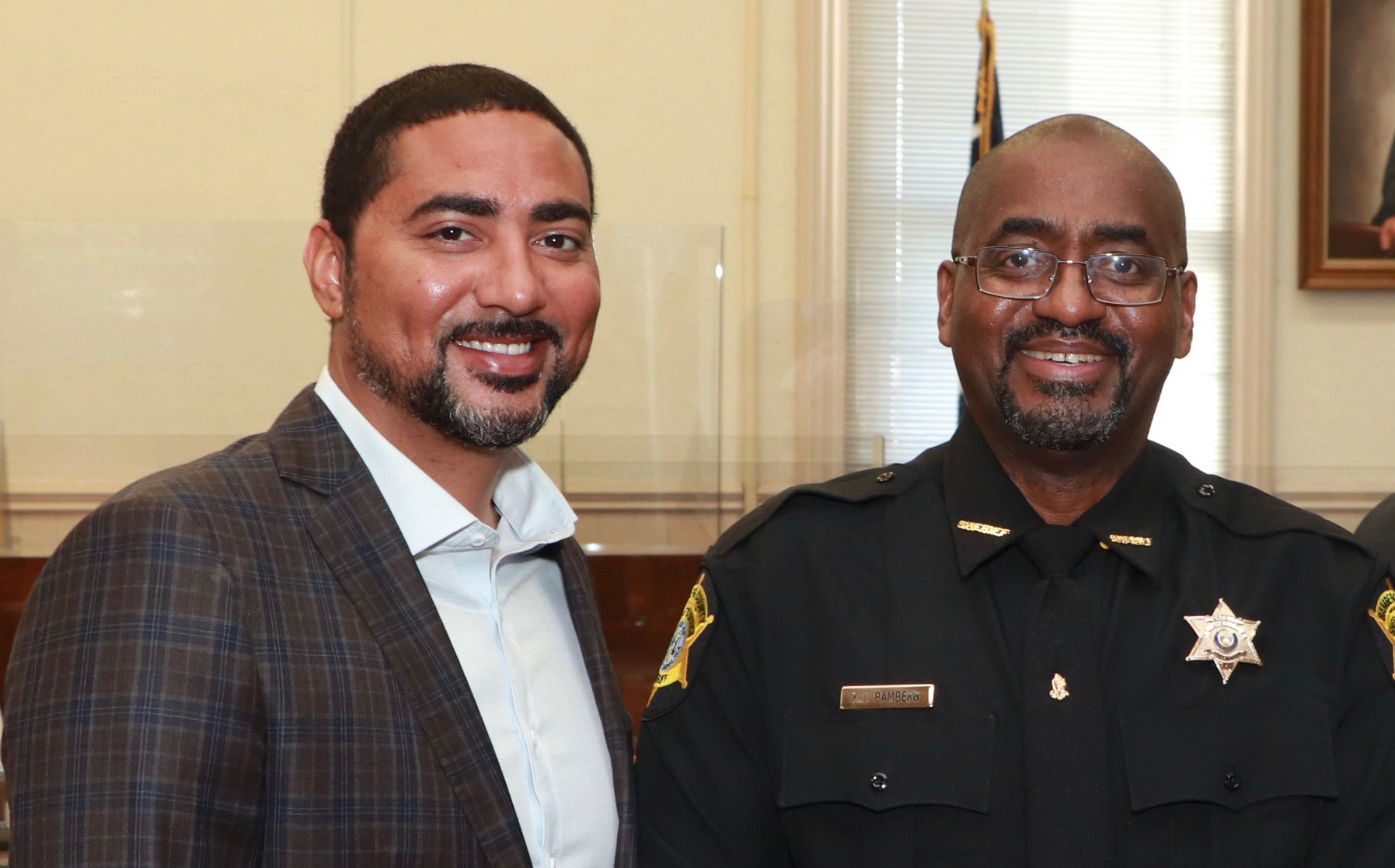 A lot has changed since South Carolina state representative Justin Bamberg was growing up in Bamberg County in the 1990s.

“There were train tracks that ran through the middle of Bamberg — the white folks on one side and the black folks on the other,” Justin Bamberg, who has represented District 90 serving Bamberg, Colleton, and Barnwell counties since 2014, told FITSNews. “People didn’t like to talk about it, but the county was very racially segregated.”

After decades of progress and a growing number of African Americans gaining positions of power, Justin Bamberg and his father Kenneth Bamberg — whose ancestors were slaves in Bamberg County —both won their 2020 elections.

On Tuesday, Kenneth “Kenny” Bamberg was sworn in as Bamberg County’s new sheriff. He’s the first black sheriff in Bamberg County history, but he doesn’t want that to define his legacy.


Kenneth Bamberg, a veteran police officer who has served as police chief of Blackville, South Carolina, is taking over as Bamberg County’s top cop during a crucial time following a year of racial reckoning in the United States.

Across the nation, Americans’ trust in the police hit an all-time low last year. And in South Carolina, nearly one in four sheriffs have recently been accused of breaking the law.

“To go from where we were, to get to the point where my dad is the top law enforcement officer in Bamberg County with support across the board— black, white, republican, democrat — it’s a testament to how good of a dude my dad is,” Justin Bamberg said of his father (who won his election in a landslide).

Over the past few years, Justin Bamberg has emerged as a major figure in the fight to reform the justice system. He’s become the go-to lawyer for many Americans — in S.C. and across the U.S. — who have been wronged by police officers. Recently, his case against the Rock Hill Police Department made national headlines.

Justin is best known for his role as an attorney and family spokesperson in the Walter Scott case in North Charleston. He not only helped Scott’s family reach a record-breaking $6.5 million settlement with the city, but Justin worked tirelessly behind the scenes with community members to keep the process peaceful.

It might seem ironic that the son of Bamberg County’s top law enforcement official is at the forefront leading the charge to hold police accountable in South Carolina.

But if you get to know the Bambergs, it isn’t ironic at all. Justin and his father strive for the same things — justice, unity and a better community.

Justin and his brother were raised in Bamberg, South Carolina on a street called Family Circle Drive — where their great-grandmother, grandmother, aunts, uncles and cousins all lived on the same street.

“You couldn’t get away with nothing on Family Circle Drive,” Justin joked. “I feel like I was one of the last ones to grow up with that ‘raised by a village’ mentality, but it was a good thing.”

Justin and his brother were among a handful of biracial kids in the county. Keep in mind, interracial marriage was unconstitutional in South Carolina until 1998.

They were raised in a no-nonsense household with two cops at the helm. His mother Ronda worked for the Denmark Police Department and the Orangeburg County Sheriff’s Office.

Ronda Bamberg runs a tight ship — both at work and at home. She worked for 30 years in law enforcement and investigated over 300 homicides.

“My mom is one of the toughest women you could ever meet in your life,” Justin Bamberg told FITSNews.

Justin recalls one of the few times he got into trouble as a teenager.

“One time, I was being stupid and skipped class to see a girl,” Justin told FITSNews, recalling very vivid details of the day. “It was a Wednesday and I had a baseball game that night.”

“The second time she called, I knew I was toast,” Justin Bamberg said. “My mom made me write an apology letter to the teacher and I had to drive it to her house that night, knock on the door and give it to her in person. That’s just how I was raised — by straightlaced folks.”

Justin and Kenneth Bamberg did not campaign together in 2020 — and there’s a good reason for that.

Kenneth believes that politics and policing should be separate.

“I understand that there has to be politics involved because sheriffs are elected officials and we have to answer to the public,” Kenneth Bamberg said. “As sheriff, you have to be fair and consistent and you have to be the sheriff for everyone, not just the people who voted for you.”

Kenneth and Justin share the same sharp set of values when it comes to public service, even though they chose different paths in their criminal justice careers.

Asked separately about what their elected position means to them, Kenneth and Justin Bamberg shared the same answer.

“This office belongs to the people,” they each said of their elected positions, adding similar details about how it is ultimately a privilege to serve as a public official.

And when it comes to a plan for increasing the public’s trust in the police, the lawmaker and sheriff both shared similar sentiments.

Kenneth Bamberg will dedicate more time to community policing and make it a priority in his administration.

“We need to be out in the community more and let people know who we are and encourage them to call us,” Kenneth Bamberg said. “Establishing trust starts with building relationships.”

Justin Bamberg, a Democrat, is working as a politician to help the public better understand the complexities behind the increasing turmoil between the black community and the police.  He also advocates to increase funding for police departments.

“People feel they have to pick one side or the other — Black Lives Matter or the police — and that’s a huge problem happening right now,” Justin Bamberg said. “I mean, look at my family. It doesn’t have to be like that. Citizens have to support law enforcement. We need them. They play a very critical role in our society.”

Kenneth and Justin Bamberg share the same belief that law enforcement officers should be held accountable when they’re in the wrong.

“Law enforcement is a profession, and above all else, we’re supposed to be public servants,” Kenneth Bamberg said. “We’re supposed to treat everyone with respect and dignity and I know there is a small percentage of officers who don’t. But the good guys don’t want the bad apples in our profession. The bad apples make all of us look bad and make it harder for everyone.”

Justin Bamberg has spent most of his legal career holding police officers accountable — and his dad is proud of him for doing it.

And that pride goes both ways.

“You know, it’s usually parents who are proud of their kids… but it was an iconic moment for me to see both me and Pops on the ballot,” Justin Bamberg said. “I warned him though — I have more grey hairs than him and they’re all from politics.”

Neither Justin nor his father are concerned about their positions overlapping and creating ethical dilemmas for Bamberg County.

“If I broke the law, my daddy would arrest me personally,” Justin says with a laugh. “When my dad won his election, I said ‘congrats and all, but just know if your guys do something wrong, I’ll sue your department just like I sue everybody else.'”

If you don’t believe that Justin would sue his own father’s sheriff’s department, just ask his mom.

In 2016, Justin Bamberg filed a lawsuit against the Orangeburg County Sheriff’s Department — while his mom was working there.

A woman came to Justin’s office and said she was sexually assaulted by an officer and no one else would take her case.

“The story she told me was crazy and I told my mom I believed her and I’m taking the case,” Justin said. “And she said OK and that was that.”

When the lawsuit settled, Justin decided to give the money from his legal fees to his mother and she was able to retire from the sheriff’s department.

“She’s technically one of my employees, but she’s really the boss,” Justin says. “I don’t back talk her, everything is ‘yes mam, no mam.’ I’ll cuss sometimes and I hear her yelling down the hall ‘Justin Tyler Bamberg, watch your mouth!'”

“Generally speaking, there is still more racial division than you would want in 2020,” Justin told FITSNews. “There’s still a black side of town and a white side of town.”

But now, where he sees division, he also sees a lot of hope.

“Circumstances have forced people to understand, you will lose if you are divided and your only hope for a better future is together,” Justin Bamberg said.

Justin’s excited to see what his dad does for Bamberg County. In one of his first moves as sheriff, Kenneth Bamberg chose to keep all of the current deputies on staff throughout his transition.

“It’ll be up to the deputies to decide if they want to stay with the changes and reorganization or not,” he said.

2021 marks the beginning of Justin Bamberg’s fourth term in the statehouse as one of its youngest multi-term politicians. While he’s thought about seeking a higher office, he’s focused right now on getting justice and creating positive change at the statehouse and in the courtroom.

“I always say, ‘attitude reflects leadership’, and if we take a strong leadership stance on bipartisanism, the people of South Carolina’s attitudes will change across the board,” Justin Bamberg said. “I love this place. I’m proud of this place. And the future is looking bright as hell.”