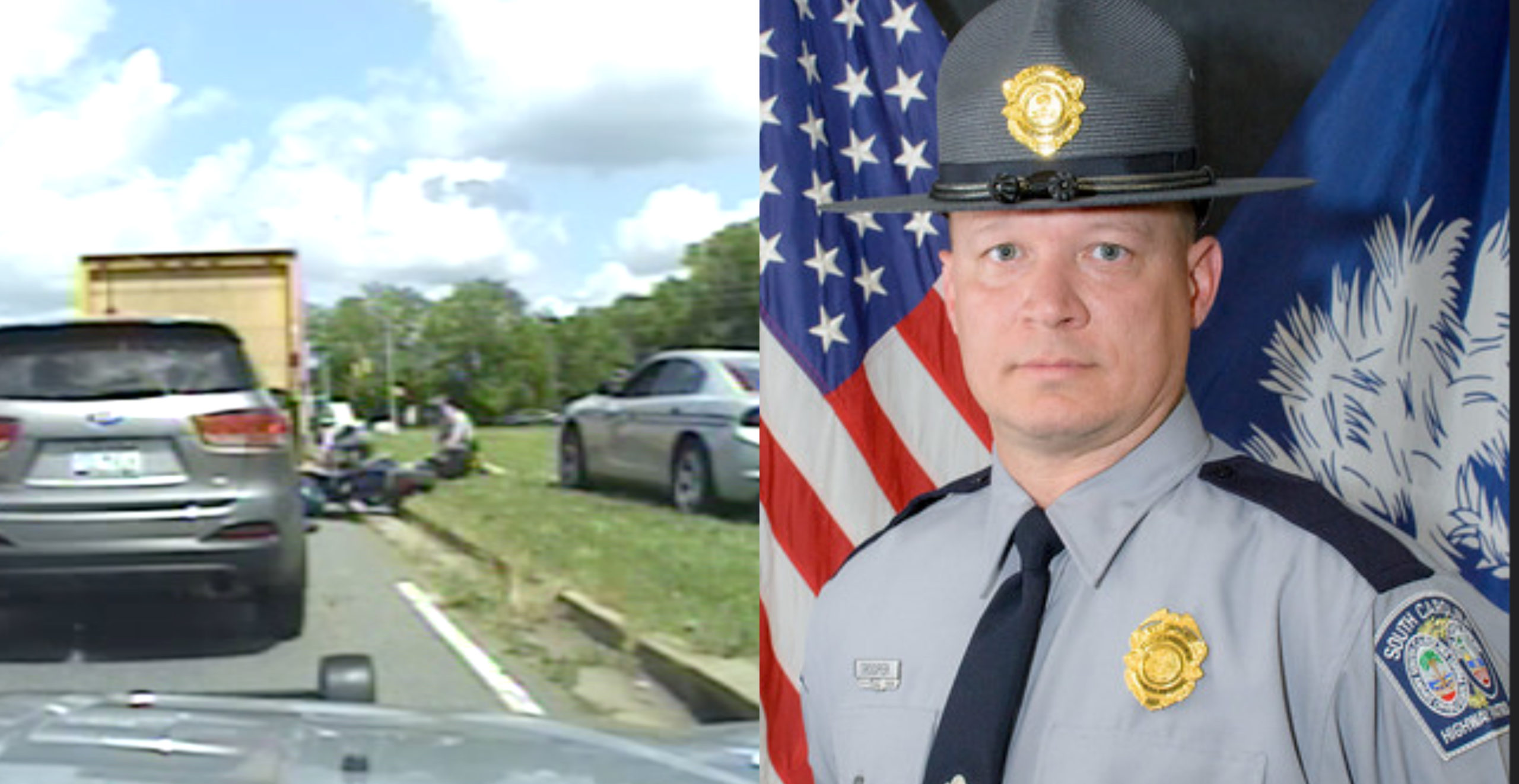 Seconds after a York, South Carolina man crashed his motorcycle during a high-speed chase on May 8, 2019, a S.C. Highway Patrol trooper approached the man — who was clinging to life and unable to speak — to ask a question.

“Was that worth it?” S.C. trooper Dewayne Bunch asked Robert David Montgomery III, who was moaning in agony from injuries sustained in the crash.

“…What did you think was going to happen when you run from police on a motorcycle?” Bunch, who had not yet graduated from S.C. Highway Patrol basic training, asked Montgomery.

The lawsuit, filed in York County, South Carolina on March 12, 2021, includes a link to the gut-wrenching dashcam video of the fatal crash and aftermath.

Before this story, no other news outlet has ever reported on this crash.

Bunch, the officer who initiated the deadly chase, graduated from S.C. Highway Patrol basic training on June 11, 2019 — one month after the incident.

He still works for the S.C. Highway Patrol.

Like so many other fatal police chases in South Carolina, this one began with a simple traffic violation.

Montgomery was speeding on Paraham Road in York, South Carolina around 3:02 p.m.on May 8, 2019. Penrod was a passenger on Montgomery’s motorcycle.

Bunch, who was patrolling the area, tried to pull Montgomery over, but Montgomery instead increased his speed and fled, according to the lawsuit.

For more than a minute, Bunch chased after Montgomery with his lights on before reporting the pursuit to his supervisor, the lawsuit said.

Click below to watch the full high-speed chase and crash. **Viewer Discretion Advised**

As minutes passed, the pursuit became more dangerous. At one point, Montgomery cut through traffic on the two-lane highway and swerved in and out of traffic.

Bunch followed close behind. He passed more than 62 vehicles and at least 4 school busses while chasing after Montgomery, according to the lawsuit.

The lawsuit claims that Bunch could see that there was an innocent passenger on the motorcycle and he continued the dangerous pursuit.

While Bunch’s supervisor Cpl. Schultz was communicating with him during the pursuit, he never ordered Bunch to end the pursuit, even though Bunch was breaking numerous SCHP policies, the lawsuit claims.

Instead, Schultz blocked traffic at the intersection of of SC-49 and SC-55.

Nearly seven minutes after the pursuit began, Montgomery’s motorcycle reached the intersection where Schlutz had completely blocked off traffic.

Montgomery’s motorcycle dodged the traffic by weaving between two cars. With nowhere else to go, he then drove onto the grassy shoulder, where his motorcycle hit a raised concrete manhole covering.

Montgomery and Penrod were flung from the motorcycle before they hit pavement.

Bunch called for an ambulance as he ran toward Montgomery, who sustained brutal injuries in the accident.

Instead of trying to comfort Montgomery, Bunch started taunting him.

“Was that worth it?” Bunch yelled.

Montgomery’s injuries were so bad at this point, he couldn’t even speak. On the dashcam video, he’s heard grunting as he tries to formulate words. He then sobs.

As he stood over the dying man, Bunch appeared to start his investigation as to why Montgomery ran from the police.

He accused Montgomery of having a suspended license and said “that was the dumbest thing to run for.”

All Montgomery could do was moan and cry out for help, but Bunch kept his line of questioning going.

“What do you think is going to happen when you run from the police?” Bunch asked.

He then approached Penrod, who was also waiting for an ambulance for several long minutes after the crash.

“Why was he running?” Bunch asked Penrod, who was sobbing uncontrollably to the point where she could hardly speak, about Montgomery. “…You’re lucky to be alive right now.”

Montgomery died three days later in a local hospital. Penrod was treated for fractured bones from the crash and still suffers from injuries sustained in the crash, the lawsuit said.

A month after the crash, Bunch graduated from South Carolina Highway Patrol basic training. He still works for the SCHP.

He’s been a law enforcement officer in South Carolina since 2001. He worked for the Winthrop University Police Department from 2001 to 2018, and then at the Lancaster County Sheriff’s Office until January 2019, when he started with SCHP.

In 2007 while working at Winthrop University, he was accused of beating up a man, tying his feet together and cracking his ribs during an arrest, the Rock Hill Herald reported. SLED investigated that incident for alleged use of force and the Winthrop Police Department was later sued for it.

Penrod’s lawsuit accuses SCHP of negligent hiring and failing to properly screen its candidates, among other claims.

The lawsuit alleged SCHP failed to appropriately investigate the incident — as Bunch was able to graduate from SCHP training just a month later with minimal consequences.

A recent Greenville News investigation found that 113 people were killed during police pursuits in South Carolina from 2009 to 2018, making the Palmetto State No. 3 in the nation for people killed in police chases during that time, according to National Highway Traffic Safety Administration data.

Police chases in South Carolina also result in a high number of lawsuits.

In January, the daughter of a Columbia, South Carolina man who was killed in a high-speed chase in July 2019 filed suit against the City of Columbia.

Last year, a South Carolina mother sued the town of Irmo and her own son after her other son was killed in a police chase.