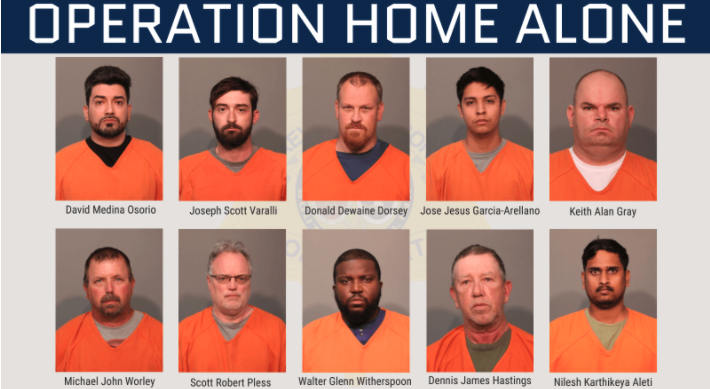 For several days in March, York County Sheriff’s Office deputies, along with officers from 13 other law enforcement agencies, tracked down alleged child predators by posing as children online on multiple social media platforms.

The ten men arrested contacted the undercover officers online and agreed to meet in a location, according to the sheriff’s office.


“These men believed they were traveling to a location to have a sexual encounter with a minor,” York County Sheriff’s Office officials said in a press release Monday. “The ages of the children they thought they were coming to have sex with were 10 to 17-years-old.”

Tolson urged parents to pay attention to their children’s cell phone and internet activity as these predators are specifically seeking out children to target.

“The message we need to communicate to parents in our community is, it’s extremely important to know what your children are doing on their phones,” said Sheriff Tolson. “Know what your child’s passwords are, know what apps they are using, and check them from time to time to see who they are talking with in chat rooms or texts.”

The suspects were between 25 and 60 years old and were all from South Carolina and North Carolina.

“I think it’s important to understand these predators online come from all walks of life and all occupational backgrounds,” Tolson said

Here is the list of arrested suspects provided by the York County Sheriff’ Office:

“We want our communities safe, we want our internet safe,” said Tolson. “If these suspects had not been identified and arrested talking to an officer, they would likely have been talking to a live child victim.”

The investigation is ongoing. Tolson said additional suspects are being identified.