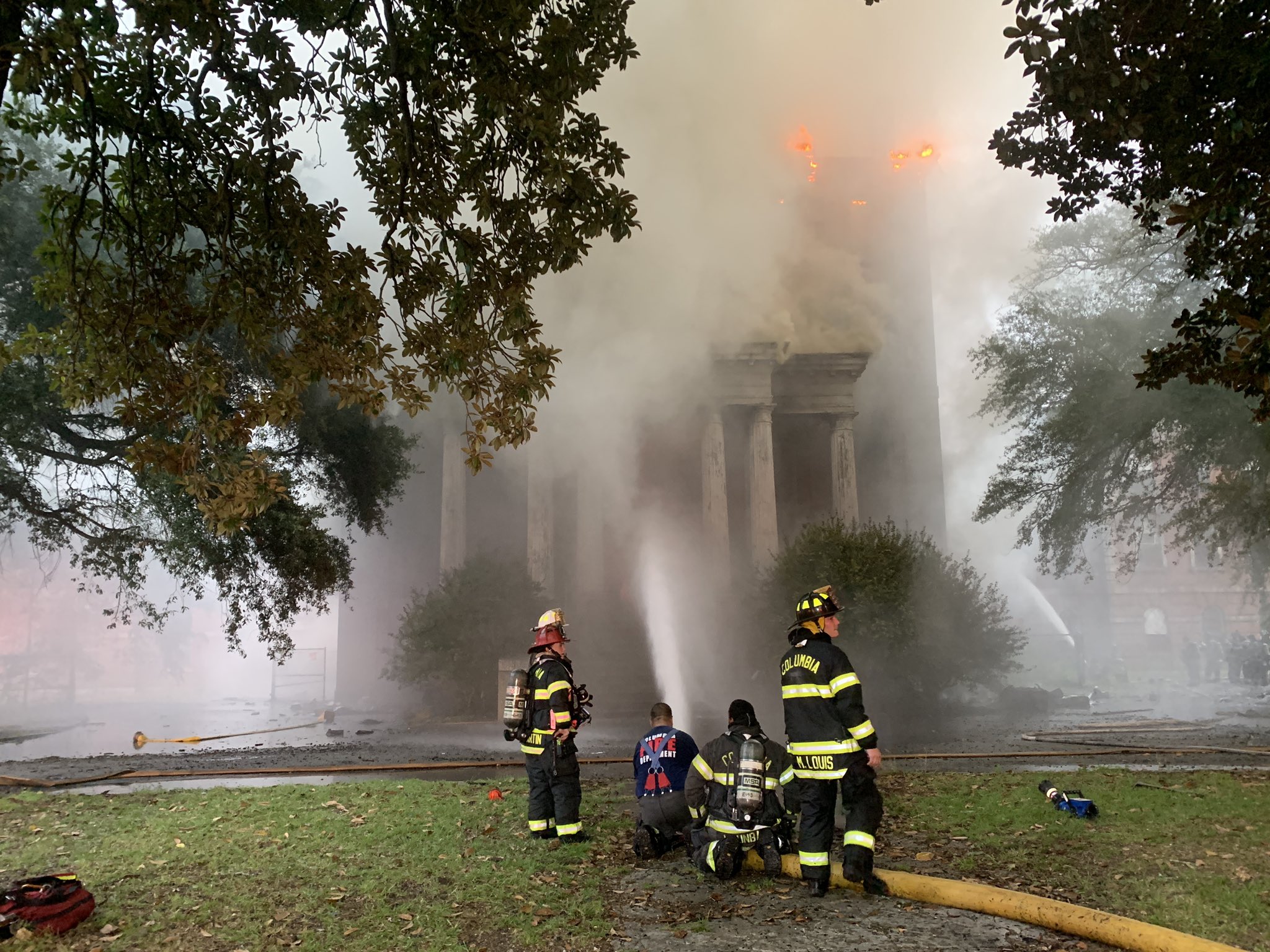 For the second time in less than two years, the historic Babcock building – the architectural centerpiece of the Bull Street redevelopment boondoggle in downtown Columbia, South Carolina – has caught on fire. This time, however, the conflagration proved to be devastating.

According to chief Aubrey D. Jenkins of the Columbia, S.C. fire department, the latest blaze – the cause of which remains a mystery – is “the largest structure fire we’ve had in several years.”

The three-alarm fire that broke out early Saturday morning caused “multiple collapses” within the four-story Italian renaissance revival structure – including the dramatic collapse of its iconic red dome. It has also gutted the mostly wooden interior of the 135-year-old building.

Take a look at this dramatic footage submitted by a viewer of WLTX TV-19 (CBS – Columbia, S.C.) …

Crews will likely be forced to destroy additional elements of the structure in order to finish putting out the flames.

According to Jenkins, firefighters and supporting law enforcement personnel arrived at the complex at around 6:30 a.m. EDT on Saturday morning after receiving reports that smoke was “billowing” from the structure. As many as sixty firefighters were dispatched to battle the blaze – with at least two sustaining injuries as a result of their efforts.

Both firefighters were injured by falling debris.

As of 1:30 p.m. EDT on Saturday, these responders were still “actively working to put out the fire,” per a tweet from the Columbia fire department. Officials also warned residents of downtown Columbia to be leery of possible respiratory issues associated with the smoke emanating from the fire.

The Babcock building was constructed in four stages from 1858 to 1885 – with work interrupted during the War Between the States. Multiple architects designed different phases of its construction – creating a disjointed layout.

The 350,000-square-foot building was added to the National Register of Historic Places (NRHP) on October 30, 1981. In the mid-1990s, it was vacated by the S.C. Department of Mental Health (SCDMH) and in 2012 it was sold as part of the controversial Bull Street deal.

This news outlet conducted an unauthorized tour of this campus back in 2012 – referring to its decaying condition as “South Carolina’s shame.” To view our story (and its accompanying photo gallery), click here.

Five years later, a film crew conducted a tour of the facility. To view our coverage of their visit (including video clips), click here.

On December 13, 2018, the roof of the building caught fire – doing an estimated $400,000 worth of damage to the facility. That tab was picked up by South Carolina taxpayers even though private developers are nearly finished purchasing the 181-acre campus on which the building stands for a mixed-use development.

This project – the Bull Street boondoggle – has been an unmitigated disaster for taxpayers, setting them back tens of millions of dollars with nothing to show for their investment except empty promises from local politicians. We chronicled the abject failure of this command economic debacle in a detailed feature story back in January 2017.

The Babcock building – owned by Richmond, Virginia-based Clachan Properties – was slated to become a 208-unit apartment complex that would serve as a centerpiece of the Bull Street redevelopment project.

Those plans were put on hold by the 2018 fire, however.

Agents of the S.C. State Law Enforcement Division (SLED) investigated the December 2018 conflagration, but they were unable to ascertain what started the blaze.

According to spokesman Tommy Crosby, SLED is already on the scene of this blaze and working with local fire and law enforcement agencies.

“SLED fire investigators are assisting Columbia fire department and local law enforcement in determining the origin of the fire at the Babcock building,” Crosby told us.

Obviously we will keep our readers up to speed on the latest related to that investigation as this clearly strikes us as a suspicious fire.

A ‘Concerning’ Amount Of Non-Native Lizards Larger Than A Cat Spotted Across SC, DNR Says