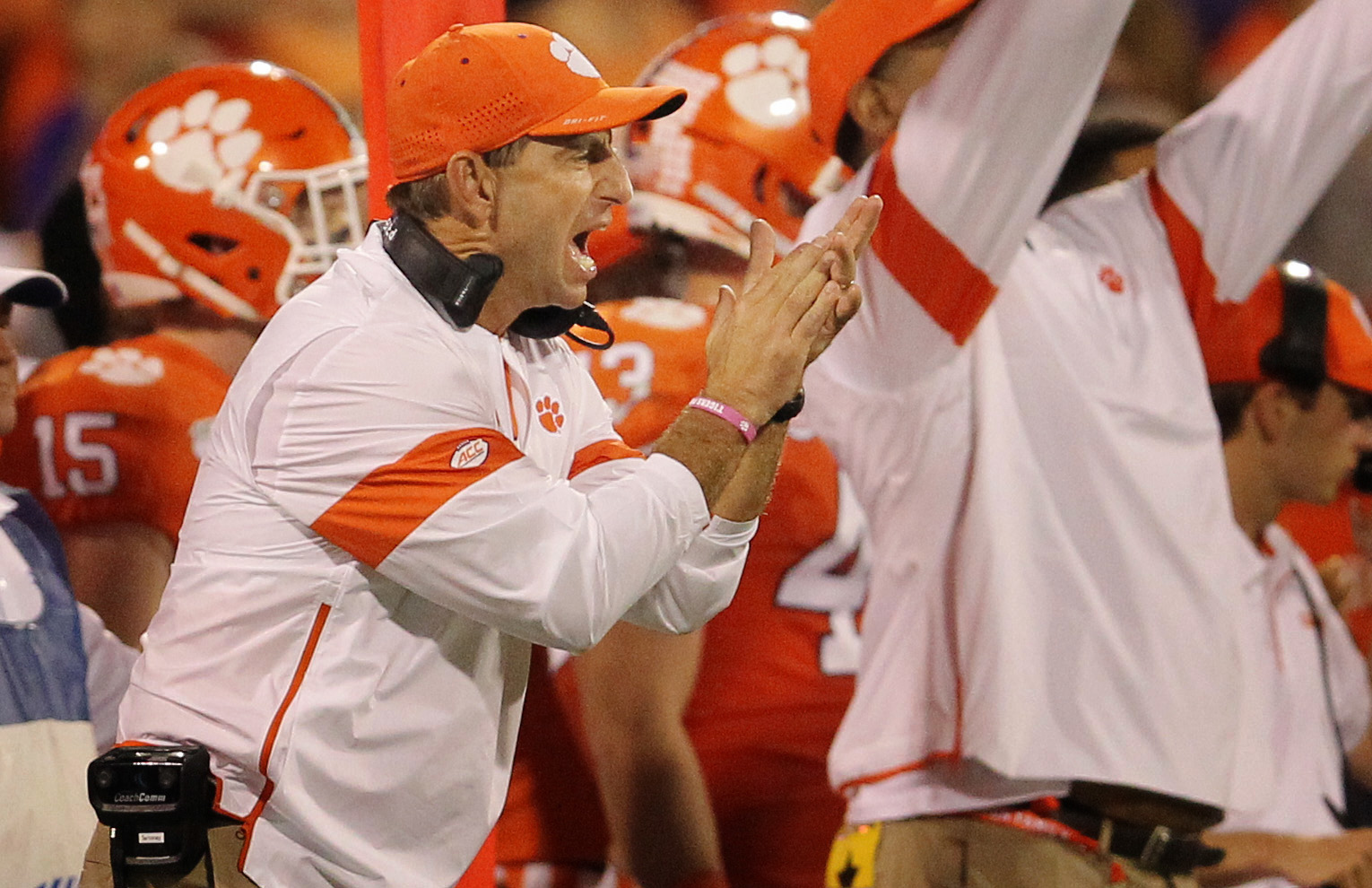 Twelfth-year head coach Dabo Swinney and the preseason No. 1 Clemson Tigers are scheduled to hit the gridiron for the opening game of their 2020 season against the Wake Forest Demon Deacons on Saturday, September 12 at Truist Field in Winston Salem, North Carolina.

The Tigers and Deacs kick off at 7:30 p.m EDT, with the game slated to be televised nationally by ABC.

Wake Forest isn’t known for having a daunting home-field advantage, and its normal contingency of 31,500 fans will be reduced to a capacity of zero thanks to the ongoing impact of the coronavirus pandemic – a decision the school made with guidance from the N.C Department of Health and Human Services (NCDHHS).

The Tigers are heavy favorites to defeat Wake Forest – which enters the game as a 32.5-point underdog to its conference rivals. If Clemson wins, it will extend its current winning streak over Wake to twelve games.

Following its season opener, Clemson closes an abbreviated September slate with a 4:00 p.m. EDT bout against The Citadel at the friendly confines of Memorial Stadium (a.k.a. Death Valley) on Saturday, September 19.

If the Tigers can make it through those seven games unscathed, their biggest matchup of the season looms on the road at Notre Dame Stadium in South Bend, Indiana. In fact, with the Big 10, PAC 12 and Mountain West conferences cancelling football this fall (and the SEC controversially choosing to play only conference games) national pundits are proclaiming Clemson’s battle with No. 10 Notre Dame as one of the most important games of the entire college football season.

Head coach Brian Kelly’s Fighting Irish finished the 2019 campaign with an 11-2 record – the program’s fourth ten-win campaign in the last five years. Its only losses last year came against Georgia and Michigan, two teams which finished the season ranked No. 5 and No. 14, respectively. In Kelly’s 11th season in South Bend, the storyline is similar. This proud program is still searching for its first national championship since 1988.

The Irish will be keyed by the return of senior quarterback Ian Book – who returns to campus for his final shot at collegiate glory. The 6-foot-0, 234-pound native of El Dorado Hills, California has been a rock for Notre Dame under center. During his two seasons as a starter, Book has led the Irish to a 23-3 record – and he joined Jalen Hurts as the only quarterback to throw for 2,500 yards, rush for 500 yards and throw 30 touchdown passes last year.

In 2018, the Irish nearly made it to the championship game but were dismantled by Clemson in the Cotton Bowl.

Notre Dame’s top three wide receivers and top running back have departed and new offensive coordinator Tommy Rees – a former quarterback at the school from 2010-13 – is facing tremendous pressure this season.

Book will have a personal body guard service in the form of Notre Dame’s offensive line – which is expected to be one of the best units in the nation with multiple returning starters (something that cannot be said for Clemson).

On the other side of the scrimmage line, two of the Irish’s top three linebackers are returning this fall but defense coordinator Clark Lea will have plenty of key holes to fill in order to shore up Notre Dame’s defense – especially as it prepares to match up against Clemson’s prolific offense.

Ultimately, though, it will be up to Book – who threw for 3,034 yards and 34 touchdowns a year ago – if Notre Dame is to have a shot at beating Clemson for the first time since 1977.

Even if the Tigers lose to the Irish, though, they would still likely qualify for the College Football Playoff conversation with just one loss. With so many conferences opting out of the 2020 season – 44.6 percent of potential playoff teams are already out of the picture. Considering that fact, Paul Myerberg from USA Today recently suggested that two ACC teams could conceivably qualify for the four-team tournament.

Expect Clemson to be one of those teams …

To finish off its 2020 schedule, the Tigers go on the road against Florida State (November 21) and Virginia Tech (December 5) – two tough challenges that which will sandwich their final home contest against Pittsburgh on November 28.

Clemson has won five straight conference championships, and would likely expect to face either Notre Dame or North Carolina in a title game this December. The Tar Heels have emerged as a dark horse pick to be a contender in the ACC this year – the program’s second season in its second stint under legendary head coach Mack Brown.

Based on recent results, Clemson might prefer to face Notre Dame as opposed to North Carolina. The Tar Heels haven’t defeated Clemson in their last two attempts, but they’ve only lost by an average of seven points – including a 45-37 defeat in the 2015 ACC Championship Game and a 21-20 nail biter last September in Chapel Hill (when North Carolina failed to convert on a two-point attempt in the game’s final second).

Carolina is led by sophomore quarterback Sam Howell, who threw for 3,600 yards and 38 touchdowns in his debut campaign. North Carolina also returns nine other starters – including the two-headed running back attack of Michael Carter and Javonte Williams (which combined for 1,936 yards and eight touchdowns a year ago).

As it has been the past two seasons, Clemson’s program is led by quarterback Trevor Lawrence. The frontrunner for the Heisman Trophy has emerged as a powerful voice for college football players across the country during the pandemic. Lawrence has spoken with U.S. president Donald Trump over the phone – expressing his desire for the sport to return to the field (a sentiment the president shares). He also joined college football players nationwide to pitch a five-point plan against systemic racism – including a call for the formation of a player’s organization.

All that’s left is for him to take his game to the next level.

After waiving star running back Leonard Fournette, it seems apparent that the Jacksonville Jaguars are not-so-patiently waiting to call Lawrence’s name with the first overall pick in the 2021 NFL Draft – with some suggesting the franchise might try to scoop up Swinney along with him.

Complementing Lawrence in the backfield again this fall will be tailback Travis Etienne, a 5-foot-10, 205-pound senior who has tallied 4,038 yards and 56 touchdowns on 7.7 yards per carry during three seasons with the Tigers. The Jennings, Louisiana native is the back-to-back ACC player of the year and the conference’s career leader in rushing touchdowns.

Expect him to continue rewriting both school and conference record books in 2020.

Lawrence will have to improvise at wide receiver with the loss of Tee Higgins (the No. 33 overall pick of the Cincinnati Bengals) and Justyn Ross (who is out for the season with a career-threatening neck injury). Look for senior Amari Rodgers, sophomore Joseph Ngata, sophomore Frank Ladson and senior Cornell Powell to emerge as Lawrence’s top targets.

A key issue for the offense this year? Protection. Four starters on the offensive line are gone from last year’s squad, so a new rotation up front must be established. The Tigers – who totaled 7,900 yards and 44 points per game in 2019 – are clearly loaded at the scoring positions, but an offensive line that only allowed 18 sacks last fall is clearly vulnerable to regression.

On defense, the Tigers once again lost several key contributors to the NFL, but coordinator Brent Venables knows how to rebound. His units have finished in the top ten nationally in total defense every year dating back to 2013.

Clemson must replace 75 percent of its starters in the secondary and two of its three starting linebackers (including No. 8 overall pick Isaiah Simmons). That means the Tigers’ defensive line could wind up becoming the centerpiece of the unit. Tyler Davis earned All-ACC honors as a freshman at defensive tackle and 2020 rookies Myles Murphy and Bryan Bresee could be immediate contributors up front.

Highly-touted defensive end Xavier Thomas – a former five-star recruit – has been expected to play a bigger role on Clemson’s defense, but he has redshirted for the 2020 season due to coronavirus concerns. Thomas – a 6-foot-2, 270-pound junior from Florence, S.C. – will be able to play in four games this season while retaining a full year of eligibility.

With 31 tackles on 434 snaps a year ago, he was a third-team All-ACC selection.

As FITSNews noted recently, Clemson has begun its fall campaigns ranked among the top five teams in the nation for five consecutive years – earning No. 1 or No. 2 rankings in four of those seasons. Similarly, Clemson has finished among the nation’s top four teams for five consecutive years – capturing national championships in 2016 and 2018 and No. 2 finishes in 2015 and 2019.

Look for that dominating run to continue in 2020 against a depleted NCAA FBS.