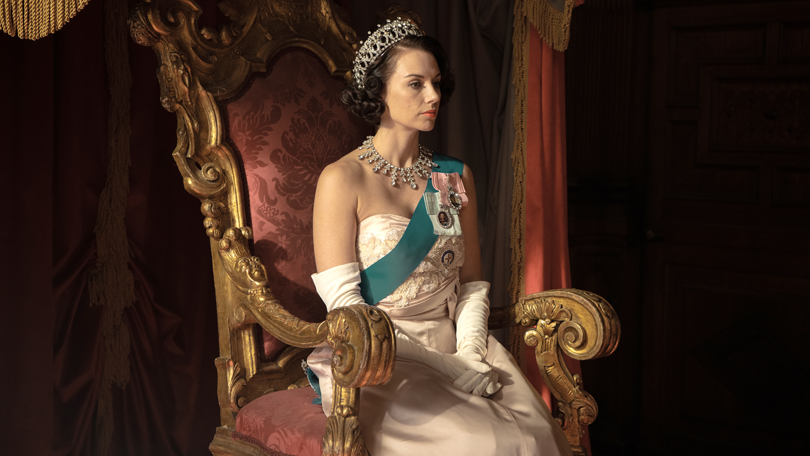 Television viewers have been treated to some critically acclaimed portrayals of Queen Elizabeth II recently – most notably Claire Foy’s and Olivia Colman’s interpretations in Netflix’s The Crown. Both actresses won Golden Globes for their work, and Foy won a primetime Emmy for her efforts (Colman will find out next week if she gets her Emmy).

The Crown has been tremendously popular with audiences, with Netflix announcing in January that the series had drawn an astounding 73 million viewers worldwide. A fourth season is coming out this November and two additional seasons have been ordered – with the first of these new installments scheduled for release in 2022.

British actress Imelda Staunton will take over as the Queen in seasons five and six, Netflix has announced.

Among those tuning in to The Crown? Her Majesty herself …

According to the British tabloid Express, the 94-year-old monarch – who is the longest-reigning ruler in British history – “liked” the show. However, the paper’s sources at Buckingham Palace acknowledged there were “some depictions of events that she found too heavily dramatized.”

Set in an alternate, mildly dystopian version of post-war London, Pennyworth (which airs on Epix) chronicles the turbulent life and times of Alfred Pennyworth – the fictitious butler to DC Comics’ iconic superhero Batman.

This superhero proximity alone was enough to get us interested in the series, which we suppose would qualify as a parallel “prequel” considering it begins before Batman’s parents – who figure prominently in its first season – have even met.

Many similar spinoffs struggle to maintain compelling narratives and sustainable character arcs – relying excessively on their juxtaposition to the famous original franchises. In some cases, their magnetism begins and ends with this connection.

That is certainly not an issue for Pennyworth, which weaves a rich tapestry of adventures, intrigues and mysteries around its central protagonist … a former British soldier eager to shed his haunted past and bare-knuckled present to establish himself as a legitimate businessman in England’s version of Gotham.

Pennyworth has been portrayed previously by the late Alan Napier (on the campy 1960s television version of Batman), by the late Michael Gough (in the 1989-1997 Batman film franchise) and more recently by Michael Caine (in the 2005-2012 Dark Knight trilogy).

Only Caine’s interpretation offered some glimpses into the character’s past, however …

The star of Pennyworth’s present? Twenty-nine-year-old Jack Bannon, who had a small role in another one of our favorite British dramas – Masterpiece’s Endeavor.

Still, the performance that left mouths agape as this series enters its second season was the one delivered by actress Jessica Ellerby (above) – who portrays Queen Elizabeth in a recurring role that ramps up (in more ways than one) as Pennington’s inaugural season approaches its climax.

We won’t get into spoilers (recalling a certain Downton Abbey tweet our founding editor sent out many years ago that caused great consternation), but suffice it to say this is one ruler who knows how to bend the rules. Ellerby’s Elizabeth is infused with a raw edge, Machiavellian realpolitik and overt sex appeal that significantly enhances the depth of Pennyworth’s broader narratives.

In a recent interview, Ellerby acknowledged her portrayal of England’s head of state had “a real slant” – and that viewers would likely be “surprised” at how her character develops.

Those are certainly understatements … although in fairness Ellerby was operating within the framework of an alternate comic book universe, one in which Elizabeth II was more of a blank page than the historical figure or the “heavily dramatized” Queen depicted on The Crown.

“She’s not completely historically exact – she’s not married, we don’t see any siblings etc., and the way that she’s written is far more relaxed and sassier than our actual monarch,” Ellerby told A Book Of last year. “So, as ever, the script has to be your bible over anything else.”

Ellerby added that she sought to inject into the monarch “a bit of an energy of Princess Margaret,” referencing Elizabeth’s younger sister (who figures prominently in The Crown).

The end result of the concoction is … imperially arousing. Especially as Ellerby manages to preserve the clipped staccato of Elizabeth’s famous accent just as well as Foy – yet at the same time managing to lend it an unmistakable “come hither” quality that we found disarming. And delicious.

And while we suspect Her Majesty will likely not lend her imprimatur to Ellerby’s performance, our guess is she probably won’t entirely recoil at the notion she is being viewed as a bona fide sex symbol.

Pennyworth was green-lit for a second, ten-episode season last fall, and filming began in January of this year. Unfortunately, production was shut down as a result of the coronavirus pandemic.

While we eagerly await an air date for the second installment, here is the trailer for the series’ first season …

A New Reality Star Is Born?