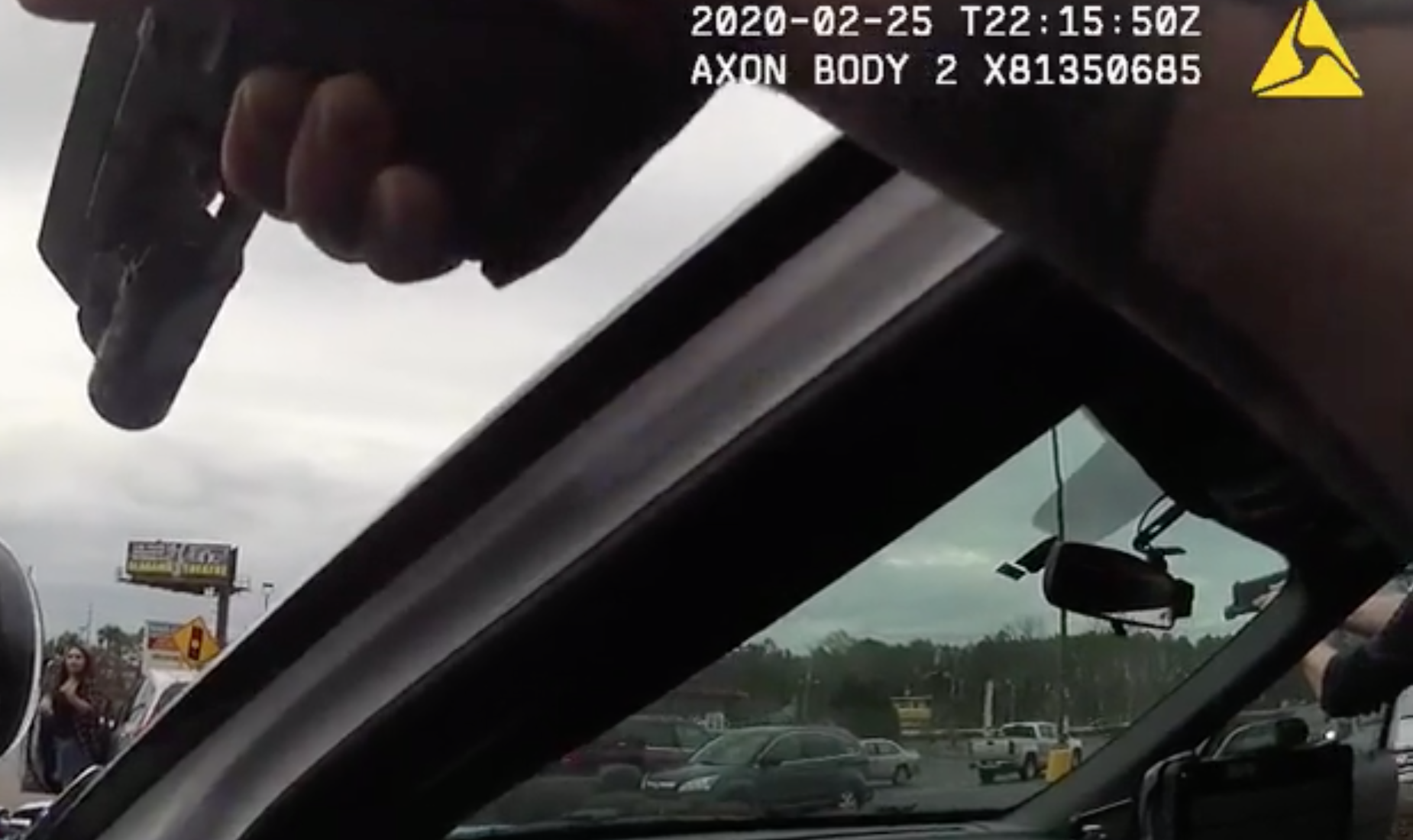 Earlier this year, Myrtle Beach police officers pulled over a mother and daughter and immediately handcuffed them at gunpoint because police thought they were driving a vehicle with a stolen license plate, according to a recently filed lawsuit and bodycam footage obtained by FITSNews.

The lawsuit was filed weeks after Myrtle Beach police officers made national headlines when they detained aerial acrobat Sam Panda for wearing a thong bikini, which they said violated the city’s nudity ordinance.

“It certainly looks as though Myrtle Beach now has a ‘woke’ problem … to go along with its crime problem. Its dirty water problem. Its coronavirus problem. And its corruption problem,” FITSNews founding editor Will Folks wrote in early August.

According to the recently filed lawsuit, Ibrahim and her 19-year-old daughter rented a car from Transformer Auto Sales on Feb. 25.

Unbeknownst to them, the license plate on the vehicle they rented was reported stolen on January 7, but returned to the owner and reported to the sheriff’s office as no longer stolen on February 10.

But because the Horry County Sheriff’s Office failed to remove the stolen license plate from the database, Myrtle Beach police flagged the plate and pulled over the two women on Feb. 25.

Keep in mind, Myrtle Beach police officers believed the plate — not the vehicle — was stolen, according to the lawsuit.

Around 5 p.m., the two women were traveling along Highway 501 when Myrtle Beach police officers pulled them over in their rental vehicle, the lawsuit said.

Officers Ryan Alvarado, Zach Reffey, Kyle Dick, and Spencer Sawicki, responded to the scene, according to the lawsuit.

The bodycam video below shows the encounter.

The lawsuit notes that, as seen on video, none of the officers approached the vehicle to attempt communication with the two women and find out more info about the licence plate.

“Had they done so, they would have recognized that the (women) were
unarmed, harmless, and been able to obtain the requisite information they needed to determine the plate was in fact clear,” the lawsuit said.

Sawicki then yelled at Ibrahim and her daughter, while the officers remained in their patrol cars with their guns aimed, the lawsuit said. They told the women to exit the vehicle separately with their hands in the air.

The women can’t hear the two officers and don’t know why they’re being told to get out of their car while guns are pointed at them, according to the lawsuit and bodycam footage.

“Ibrahim exited the driver side of the vehicle while leaving her scared,
nineteen year old daughter inside,” the lawsuit said. “Visibly frightened, Ibrahim stood outside of the vehicle while officers screamed at her to face away from them, lift her shirt up, and walk backwards towards them with guns aimed directly at her. Ibrahim complied, visibly shaken, and in view of the surrounding public.”

She was immediately handcuffed and taken to the back of one of the patrol vehicles without any explanation, bodycam footage shows.

The teenager was then instructed to get out of the vehicle, still with guns pointed toward her, the video shows.

“That’s my daughter, what’s going on?” Ibrahim said from the back of the police car. In the bodycam video, you can hear Ibrahim ask Sawicki this multiple times. With his gun still pointed at the rental car, the officer ignores her.

The teenager complied and was immediately handcuffed and taken to another police car separate from her mother.

Officers started making phone calls and within minutes figured out that the license plate was no longer stolen — and that these two women didn’t do anything wrong.

“Still, officers Alvarado, Reffey, Dick, and Sawicki deliberately kept the (women) separated from each other and handcuffed for no justifiable reason,” the lawsuit said.

This went on for more than 10 minutes.

“Am I going to jail now, or what’s going to happen?” Ibrahim asks the officers.

“No,” One of the Myrtle Beach officers replied. “The only reason why you’re in handcuffs right now and why we had guns out… it’s cause… the license plate is coming back stolen and we have a certain way to go about things when cars come back as stolen.”

According to the lawsuit, the officers could have easily avoided this traumatic situation if they just approached the vehicle and attempted communication with the women to begin with.

Dashcam video shows the 19-year-old shaken and on the verge of tears as she waits in the back of the police car handcuffed.

According to video captured from the scene, officers appear to mute their audio as they discuss the situation for more than 2 minutes. They’re seen laughing on video.

“The failure of the officers to assume responsibility for taking such excessive action for an alleged stolen license plate that took less than twenty minutes to resolve was grossly negligent and directly caused harm to the (women),” the lawsuit said.

And had the Horry County Sheriff’s Office done its job, the license plate wouldn’t have scanned as stolen, and the entire situation could have been avoided, the lawsuit alleges.

After more than 20 minutes, the women were free to go and no charges were filed.

According to the lawsuit, the officers used “excessive force under the circumstances” and “escalated a situation that increased risk and harm.”

Georgetown attorneys Lauren Knight Slocum and C. Carter Elliott are representing Nervan Ibrahim and her daughter in the lawsuit.

Take a look at the lawsuit…


The lawsuit was first reported by the Myrtle Beach Sun News Monday.