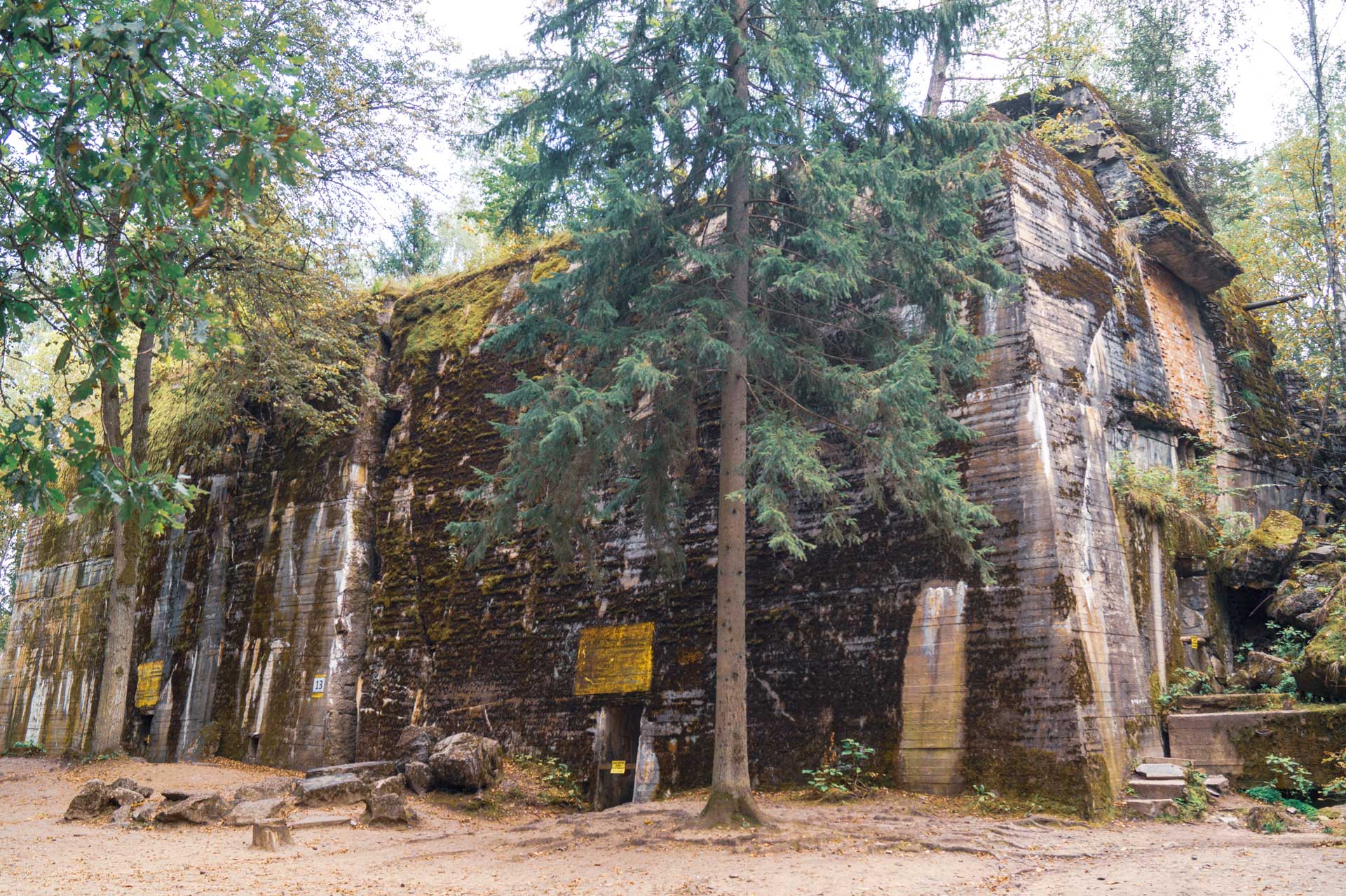 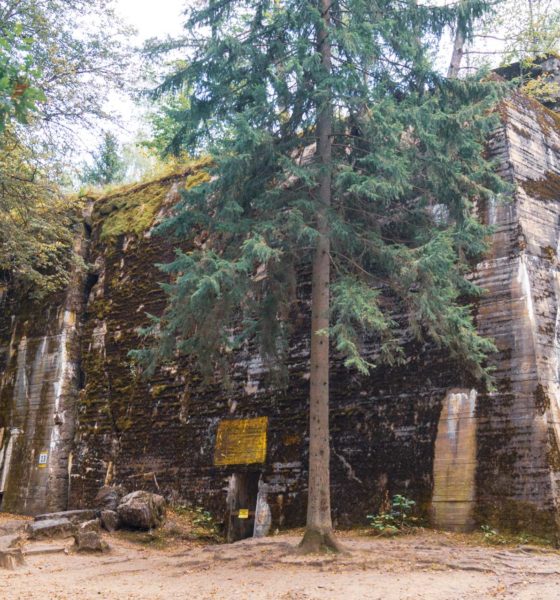 “The scars left by the war should be preserved and presented as a lesson, a warning.”

Hidden deep within the Masurian woods in present-day Poland – near the village of Görlitz – is a network of camouflaged, concrete bunkers that once housed the primary wartime headquarters of one of the most notorious figures in history, German dictator Adolf Hitler.

The Wolfsschanze – or Wolf’s Lair – first welcomed Hitler to its secret, ostensibly secure confines on June 23, 1941 (one day after Nazi Germany embarked upon its fateful invasion of the Soviet Union). All told, Hitler spent more than 850 days at this complex over the next three-and-a-half years prior to departing for the final time on November 20, 1944 as the Red Army completed its reoccupation of the Baltic states.

The Wolfsschanze was captured by Soviet troops on January 27, 1945 – the same day the Auschwitz concentration camp was liberated in southern Poland.

Hitler spent more time at the Wolf’s Lair than any of his other Führerhauptquartiere (leader headquarters). And it was here at this heavily guarded location – on July 20, 1944 – that a group of German resistance fighters led by Claus von Stauffenberg attempted to assassinate the warlord as part of a failed coup d’état that ultimately led to his death (and nearly 5,000 additional executions).

The attempted assassination and failed coup are the focus of the 2008 film Valkyrie, which starred Tom Cruise as von Stauffenberg.

Nazi engineers attempted to destroy the Wolf’s Lair prior to its capture by advancing Soviets – but they were largely unsuccessful due to the sheer size of the steel-reinforced concrete bunkers. Once the area was cleared of land mines following the war, the Polish People’s Republic – a satellite state of the Soviet Union – essentially left the Wolfsschanze to be reclaimed by the surrounding forest.

The present-day site – which draws an estimated 300,000 annual visitors – is managed by the Srokowo Forest Inspectorate, a division of the Polish state. District leaders are in the process of completing a major upgrade of the facilities on the site – with the stated goal of maintaining “respect for historical truth.”

Among the new exhibits? A reconstruction of the conference room where von Stauffenberg planted the bomb that nearly killed Hitler … and a replica of the briefcase in which this explosive device was transported. For those of you unfamiliar with the narrative of the assassination attempt, Hitler’s life was spared when colonel Heinz Brandt unwittingly moved the briefcase containing the bomb from the location where von Stauffenberg had originally placed it – directly below the Fuhrer – to the opposite side of one of the massive oak conference table’s leg supports.

Von Stauffenberg’s bomb killed four people, but Hitler escaped with tattered trousers and minor injuries. And once Army leaders learned their warlord had survived the assassination attempt, the coup d’état against his government in Berlin quickly collapsed – thus extending World War II for another ten months.

The reconstructed conference room at the Wolfsschanze includes a replica of the famous oak table made by local carpenters and positioned precisely where it would have been on July 20, 1944. The display surrounding it is based on photographs, archived documents and witness accounts.

Why should we care about these efforts to preserve history?

Regular readers may be aware that this news outlet has been following the ongoing debate in America over the disposition of certain historical monuments (well, to the extent there has been any debate).

In this context, we were drawn to a quote we found in a July 2019 BBC story by journalist Laurence Peter about the renovations to the Wolf’s Lair. The quote – attributed to Polish historian Pawe? Machcewicz – struck us as quite profound.

“The scars left by the war should be preserved and presented as a lesson, a warning,” Machcewicz told Peter, referring to the planned renovations of the Wolfsschanze.

We will repeat Machcewicz’s quote, because we believe it bears repeating …

The scars left by the war should be preserved and presented as a lesson, a warning.

We wholeheartedly endorse this model of instructive historical preservation over the current campaign of mindless historical erasure. Certainly, an instructive, preservative approach is the model favored by those who have labored for years to lift up the legacy of Auschwitz – where an estimated 1.1 million Jews, Poles, Romani and Soviet prisoners of war were killed between May 1940 and January 1945 by their Nazi executioners.

“There is no way to understand postwar Europe and the world without an in-depth confrontation between our idea of mankind and the remains of Auschwitz,” the curators of the extermination camp’s museum noted on their website.

The genocide inflicted by the Nazis is a stain on civilization – as is the institution of slavery. Obviously, people are well within their rights to argue to the contrary – even to embrace misology by denying these atrocities and abominations ever took place. But we believe anyone with a rational mind and a shred of humanity would agree these historical events were the very embodiment of evil in our world – and our ability to document them is critical in debunking misology.

Certainly anyone claiming to stand for life and liberty would think thusly … and would want to facilitate the very sort of “confrontation” the curators of Auschwitz referenced.

All of this brings us back to the central question(s) at hand: How should we “curate” events in America’s history? How should we teach our children about these events? What lessons do we seek to impart to future generations as we study them? What “confrontations” must we facilitate? And how can all of this be done both respectfully and accurately?

In short: What do we do with history?

First, we should stop reflexively erasing it.

In the aftermath of the tragic and totally lawless killing of George Floyd in Minneapolis, Minnesota on Memorial Day there has been a headlong rush to tear down thousands of American monuments – including those located in our home state of South Carolina.

Hundreds of monuments and memorials have already come down …

As this push gains momentum, we believe a dangerously divisive trend is taking hold within our society – its groundwork laid by decades of government-run education and higher education indoctrination.

Having forgotten how to think for ourselves (or having become too fearful to even try), many in our culture have surrendered their thought processes to the lowest common denominator – embracing tribalism and all of its attendant absurdities, inconsistencies and ignorant prejudices.

Rather than using our common sense, we seek out conformity.

As opposed to thinking critically, we allow our increasingly sensitive synapses to be spoon-fed.

Instead of speaking our minds, we mindlessly regurgitate something we saw on social media.

And rather than turning the other cheek when we are wronged (usually superficially), we are becoming addicted to indignity … and the opportunity to return evil for evil.

Amongst America’s educated “elite,” there is clearly a troubling polarization of ideological orientation … but what really confronts us is far more dangerous than that. It is the wholesale abdication of rationality and independent thought – a rising tide of knee-jerk ignorance imbued with a total lack of respect for life, liberty and property. And compounded by a galling lack of self-awareness that breeds hypocrisy and sanctimony.

As we grow increasingly divided … we are increasingly dumbing each other down, creating precisely the sort of conditions for a society in which the destruction of knowledge is celebrated with all the fervor of a Third Reich book barbecue.

The founding editor of this news outlet Will Folks has written about ideological polarization in America in the past (here, here and here), but he has failed to seize upon the root intellectual incuriosity and rising incapacity for clear, common sense thought that is truly stoking the fires of division in our nation.

“Goose-stepping morons like yourselves should try reading books instead of burning them,” Dr. Henry Jones Sr. famously told a Nazi antagonist in the 1989 Steven Spielberg classic Indiana Jones and the Last Crusade.

We also believe America should take a page out of Poland’s book – preserving and protecting history (however controversial) instead of advocating for its eradication.