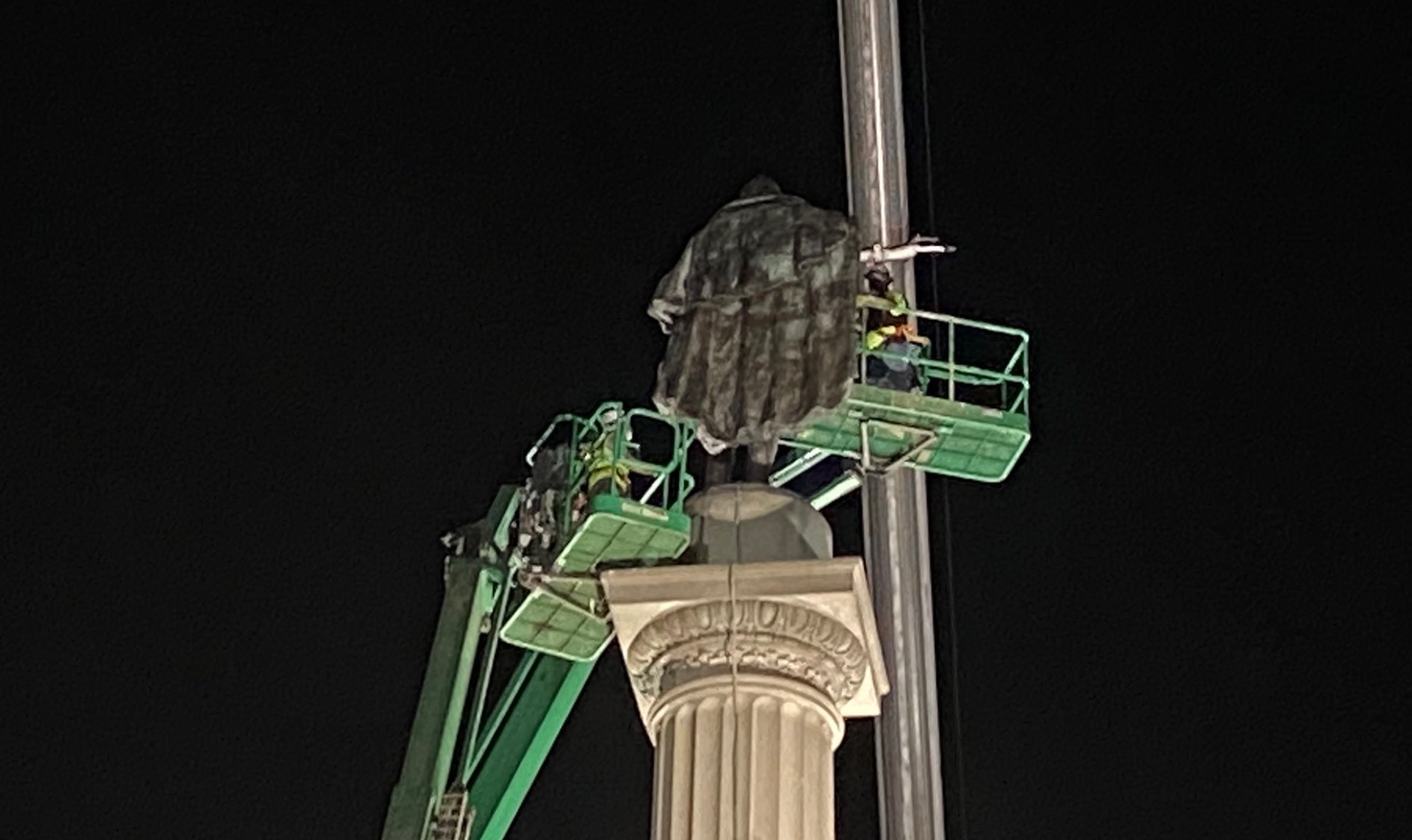 In apparent defiance of a state law governing the disposition of historical markers, monuments and other designations, the city of Charleston, South Carolina removed a 124-year-old statue of the late U.S. vice president John C. Calhoun on Wednesday.

Crews began working to remove the memorial at 11:30 p.m. EDT on Tuesday evening – hours after a unanimous vote of city council. Through the early morning hours, they sawed away at the base of the 12-foot, eight-inch icon – a 6,000-pound bronze behemoth secured atop a 115-foot stone column.

As dawn broke over the Holy City, a harness was fastened around the statue while crews ramped up their efforts to separate it from its pedestal and begin lowering it to the ground.

This unexpectedly arduous task – which was supposed to have been accomplished in a matter of minutes under cover of darkness – was finally completed at around 5:30 p.m. EDT, seventeen hours after the work first began.

The removal of the monument was the opening salvo in a planned purge of antebellum Southern history/ War Between the States history precipitated by the killing of George Floyd in Minneapolis, Minnesota on Memorial Day. That incident sparked global unrest and lawlessness … including riots on the streets of downtown Charleston, S.C. which city leaders did little to try and quell.

Widely regarded as the Palmetto State’s most prominent historical statesman, Calhoun served as vice president from 1825-1832 under presidents John Quincy Adams and Andrew Jackson. He was best known for his advocacy on behalf of nullification – the doctrine that states could refuse to enforce acts of the federal government they deemed to be unconstitutional.

Calhoun was also an outspoken proponent of the institution of slavery, calling it a “positive good” and once arguing “there never has yet existed a wealthy and civilized society in which one portion of the community did not, in point of fact, live on the labor of the other.”

Charleston is not the only South Carolina city with a Calhoun memorial. Within the main lobby of the S.C. State House in Columbia is a life-sized statue of the statesman. The capital city also features a street bearing his name (as do at least a dozen other cities in the Palmetto State). Also, an entire county is named after Calhoun … as is the town of Calhoun Falls, S.C.

As for the Charleston memorial, its future is unclear. In the short-term, it will be placed in a city-owned storage facility while leaders debate its final destination.

Some of those calling for the monument’s removal want it placed in a museum, however leaders of the famed Charleston Museum have made it clear to city officials that they are not ready to take possession of the statue.

“We would certainly consider accepting the statue at a future date,” museum president Douglass Sass wrote in a letter to Charleston mayor John Tecklenburg.

However, Sass noted “significant planning would be required and we cannot commit to a decision of this magnitude in such a limited period of time.”

Which reminds us … it probably won’t be long before the Ravenel bridge itself receives the same revisionist historical treatment. After all, its namesake is a member of the Moultrie Camp of the Sons of Confederate Veterans – as well as a man who once referred to the National Association for the Advancement of Colored People (NAACP) as the “National Association for Retarded People.”

When this remark drew widespread criticism, Ravenel doubled down.

“I made a rhetorical slip, and they want to lynch me for it,” he said.

Ravenel – the father of reality television star Thomas Ravenel – also addressed a white nationalist group in 1993 and during his remarks reportedly vowed to resist “all efforts to mix the races of mankind, to promote non-white races over the European-American people.”

In other words, we expect the iconic span connecting Charleston and Mount Pleasant to soon find itself on “the list.”

Our views on all this historical sanitization? You can read them for yourself by clicking here …