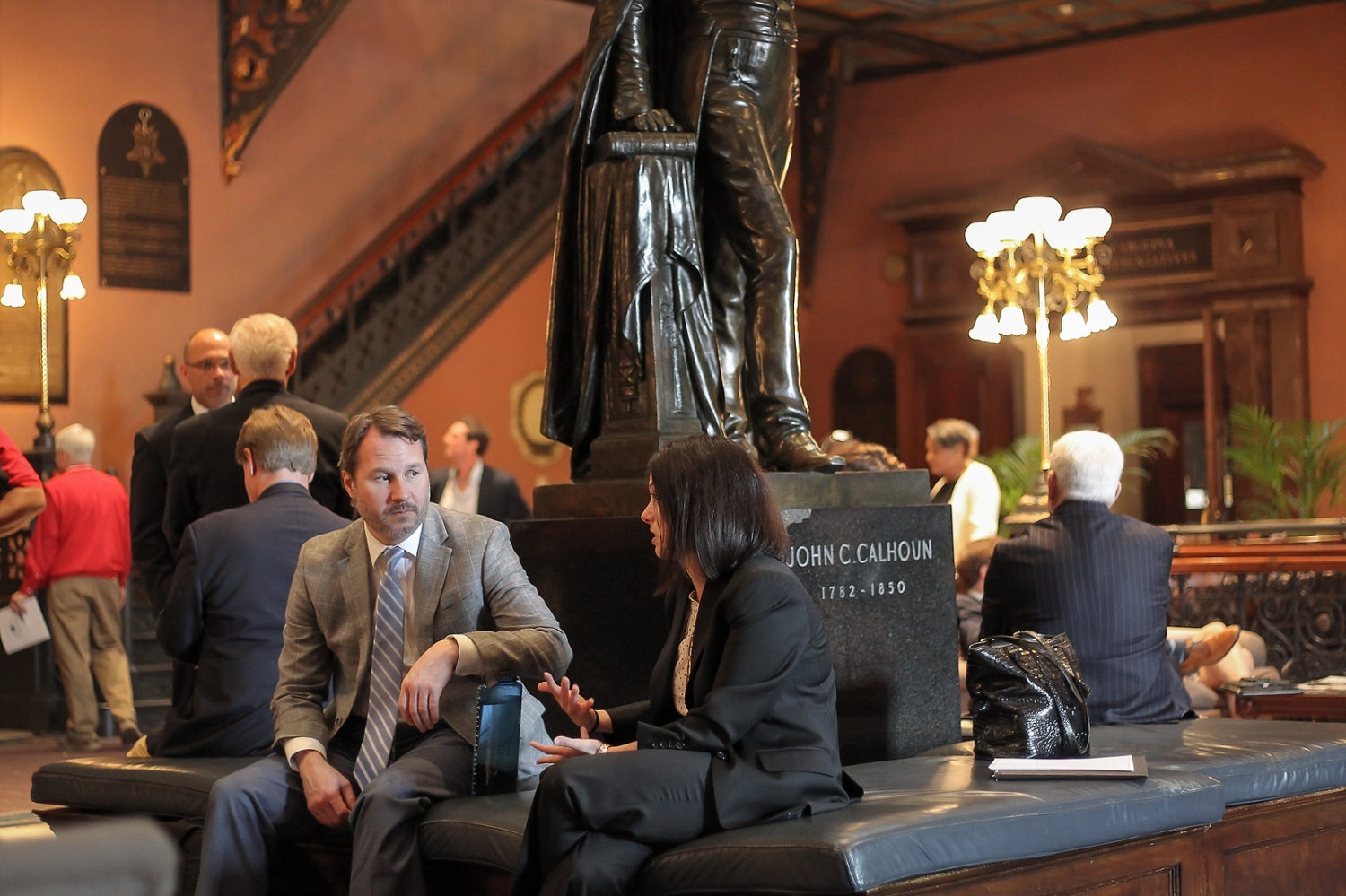 The battle is officially joined in Charleston, South Carolina as recent efforts to remove a long-standing monument to the late U.S. vice president John C. Calhoun have gained traction following of the killing of George Floyd in Minneapolis, Minnesota on Memorial Day.

Also unleashed? A broader debate over the extent (and efficacy) of societal sanitization in the name of revisionist history and … ostensibly … racial reconciliation.

First, though, Calhoun: Charleston mayor John Tecklenburg – who previously opposed removing the Calhoun monument – is now leading the charge to take it down.

Erected on June 27, 1896, this 115-foot monument features Calhoun standing with his cloak draped over his shoulders – a scroll clutched in his left hand as he overlooks the street that bears his name.

Calhoun is widely regarded as the Palmetto State’s most prominent historical statesman. In addition to serving as vice president from 1825-1832, he earned a place in the national history books for his advocacy on behalf of nullification – the doctrine that states could refuse to enforce acts of the federal government they deemed unconstitutional.

Calhoun was also an outspoken proponent of the institution of slavery, once arguing “there never has yet existed a wealthy and civilized society in which one portion of the community did not, in point of fact, live on the labor of the other.”

That’s true … although we fail to see how this economic principle aligns with the most fundamental deprivation of human liberty.

“That we as Charlestonians must reckon with Mr. Calhoun’s towering and deeply troubling legacy is a given,” Tecklenburg said in a statement earlier this week. “That we must allow his memorial to continue to divide our city while we do that reckoning, however, is not a given.”

Not only is Tecklenburg calling for the Calhoun monument to be removed, he says a 2000 state law forbidding such historical sanitization does not apply to his city – which was besieged by violent rioting following Floyd’s death (rioting Tecklenburg has been accused of enabling).

Tecklenburg’s about-face on the Calhoun statue makes his city ground zero for a potential legal challenge to the so-called “Heritage Act,” which was part of a bipartisan, biracial movement to remove the Confederate flag off of the dome of the S.C. State House to a position on the north lawn of the state capitol twenty years ago.

Per the terms of the Heritage Act, “any monument, marker, memorial, school, or street erected or named in honor of the Confederacy or the civil rights movement located on any municipal, county, or state property shall not be removed, changed, or renamed without the enactment of a joint resolution by a two-thirds vote of the membership of each house of the General Assembly.”

This law was amended in the spring of 2015 to remove the flag from the State House grounds following the tragic, racially motivated “Holy City Massacre” in Charleston, S.C. – but legislative leaders made it clear at the time that they would abide no further historical sanitization.

Readers will recall our news outlet was the first media entity in the entire state to call for the flag to come down – however we have opposed the removal of the Calhoun statue and other attempts to rewrite history on the grounds that they do little (clearly) to promote racial harmony.

In the aftermath of Floyd’s killing, the intensity of this debate has escalated.

Earlier this week, S.C. House minority leader Todd Rutherford called on state agencies and government subdivisions to ignore the law and remove “racist” monuments and other designations regardless.

“What I am asking them to do is have guts, have courage – and do it anyway, and encourage anyone who doesn’t like it to sue them,” Rutherford said.

That is exactly what Tecklenburg intends to do …

Not only that, Charleston city council is currently in the midst of identifying other statutes, memorials and designations it believes are in need of purging.

Do we support these efforts? Again … no. Certainly not without conducting a thorough assessment of the legality of such acts (and the constitutionality of the Heritage Act, which itself is up for debate).

More importantly, we believe these legal questions ought to be addressed as part of a much larger discussion of the reconciliatory value of such purges – to say nothing of the slippery slope such decisions could set us upon.

Previous efforts by South Carolina municipalities, state agencies and other government subdivisions to remove symbols of the Confederacy have been unsuccessful due to the Heritage Act – including efforts to remove Calhoun’s legacy from Clemson University by renaming the school’s signature building, Tillman Hall.

That latter structure is named after Benjamin Tillman, an outspoken white supremacist and lynch law advocate who was indicted (but never tried) for his role in the 1876 Hamburg Massacre. In that incident, at least six black freedmen were murdered by a racist mob.  Three others were shot and seriously wounded.

Not only was “Pitchfork Ben” never prosecuted for his role in the Hamburg Massacre, he referred to it as one of many “stirring events” that rallied support for his 1890 gubernatorial campaign. Tillman won that race, which ushered in South Carolina’s “Jim Crow” era and the infamous Constitution of 1895 – a document which continues to hold our state back on multiple levels.

In addition to adorning Clemson’s most famous building, a statue of Tillman (above) is also located on the northwest corner of the S.C. State House grounds in Columbia, S.C.

As for Calhoun, his name is emblazoned on much more than just a monument (and a street) in Charleston. Within the main lobby of the S.C. State House is a life-sized statue of Calhoun – and the capital city also features a street bearing his name (as do a dozen other cities in the Palmetto State).

In fact, an entire county is named after Calhoun … as is the town of Calhoun Falls, S.C.

Are all of these designations to be stripped as well?

Is Calhoun’s grave at St. Philip’s Episcopal Church in Charleston to be dug up, as well?

Seriously … where does it stop?

Will we need to rename the city of Columbia? After all, it bears the name of Christopher Columbus – whose statues are being yanked down all across America right now (here and here) owing to his status as the first known explorer to enslave native North Americans in the late fifteenth century.

In 1495, Columbus is reported to have captured 1,500 Arawak men, women and children on the island of Hispaniola – all of whom he sent back to Spain as slaves. An estimated 500 of the Arawak people died on the journey.

“Columbus not only sent the first slaves across the Atlantic, he probably sent more slaves – about five thousand – than any other individual,” historian James Loewen noted in his 1996 book Lies My Teacher Told Me.

So again … are we going to rename Columbia?

What about Charleston? The city – originally christened Charles Towne – bears the name of Charles II of England, under whose regal auspices the Royal African Company was first incorporated in 1660. Over the next seventy years, this company transported an estimated 212,000 African slaves to North America – of whom 44,000 perished during their journey. Slaves belonging to this company were branded with the initials “RAC” on their chests and sold to wealthy landowners in North America – creating vast wealth in both the old and new worlds.

According to historian William Pettigrew, the company founded by Charles II and his brother – James II of England – “shipped more enslaved African women, men and children to the Americas than any other single institution during the entire period of the transatlantic slave trade.”

Specifically, the company “provided a reliable supply of enslaved Africans to the mainland American colonies, thus playing a critical part in entrenching African slavery as the colonies’ preferred solution to the American problem of labor supply,” according to a synopsis of one of Pettrigrew’s books on the subject.

So … are we renaming Charleston, too?

What about Greenville, S.C.? The most populous municipality in the South Carolina Upstate – like many other cities and towns across the nation – is named after major general Nathanael Greene, who earned a reputation during the Revolutionary War as the most reliable commander serving under future first president George Washington.

For his exploits in the war, Greene was awarded with landed estates across the south – many of which used slaves as laborers.

So … are we also renaming Greenville?

Which reminds us, Washington was also a slaveowner …

Does that mean we are renaming our nation’s capital? Or the state bearing his name? Or taking him off the $1.00 bill?

And what about Italian merchant and explorer Amerigo Vespucci, whose name adorns both our nation and our continent. Vespucci not only owned slaves, but like Columbus he raided indigenous settlements in Hispaniola during his voyages and took hundreds of native Americans to Spain as in bondage.

Are we renaming our entire country? Our continent?

Also, in light of some of the distinctly less-than-flattering aspects of the legacy of Martin Luther King, Jr. that have been unearthed in recent years, what are we to do with the thousands of monuments and designations that have been erected in his honor?

Obviously the media declined to cover any of these shocking allegations against King, but while praising King’s legacy of racial justice we believe it is important to ask … is there is true “equality” when it comes to #MeToo revisionist history?

Certainly there is no political equality in the present tense …

Seriously, though … where does all of this stop?

Most importantly, though … what does any of this ultimately accomplish in terms of bringing the people of our badly divided nation together?

Is this really an exercise in reconciliation? Or is it more about fomenting division? And unfairly castigating people for the sins of previous centuries?

Again, in the aftermath of the Floyd killing – and the righteous anger it has engendered – everything ought to be on the table for discussion. And as noted at the outset of this piece there needs to be an acknowledgement that the rage fueling this sanitization movement is justified. Our point is simply that in discussing the Calhoun monument in Charleston (and the Heritage Act in South Carolina) there is a bigger picture to consider.

And a precedent of which to be leery …