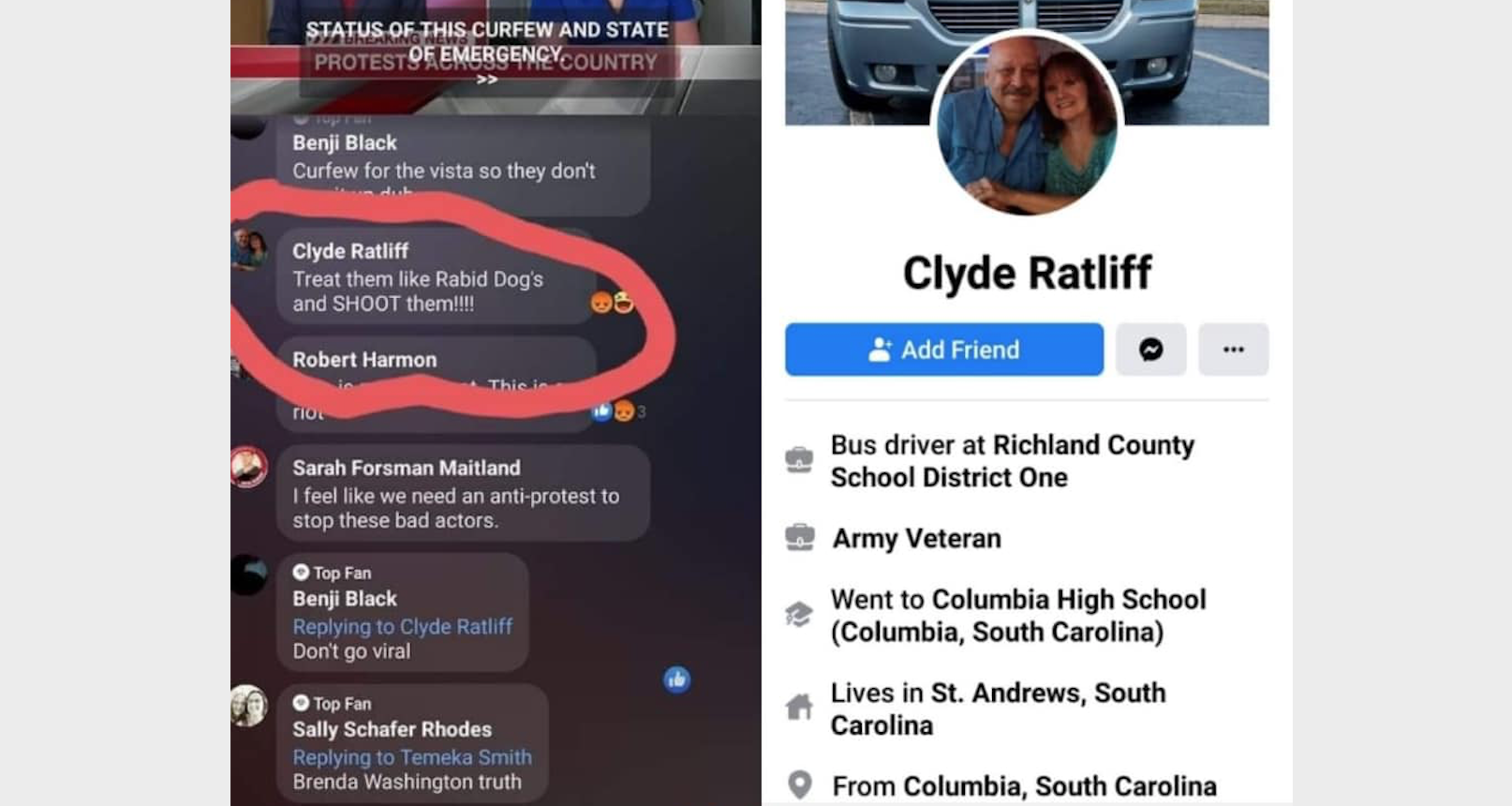 A South Carolina school district — that was just in the news last week for issuing a slavery assignment many called offensive — has fired a bus driver who allegedly posted racist remarks on social media about the protesters fighting racist police brutality in the wake of the killing of George Floyd in Minneapolis, Minnesota last week.

Richland County School District One Superintendent Dr. Craig Witherspoon said on Facebook that officials had received “numerous screenshots of a social media post that contained incendiary and derogatory language regarding incidents that have occurred in the wake of the death of George Floyd in Minnesota” on Saturday evening.

That person, according to screenshots obtained by FITSNews (below), was Richland One School Bus Driver Clyde Ratliff.

Ratliff allegedly posted on a Facebook Live report about local protestors to “treat them like rabid dogs and SHOOT them,” according to the screenshot.

According to Witherspoon, district officials immediately began investigating this incident when they became aware of the post Saturday evening.

“The person who made the comment on Facebook is no longer employed by Richland One,” Witherspoon said, not naming the bus driver in the release.

‘We appreciate the many concerned students, parents, staff and community members who brought the social media post to our attention,” Witherspoon wrote. “To those who questioned whether we, as a district, condoned or supported the comment that was made, I can assure you that we did not and we do not. In Richland One, our core values include respect and compassion for all people. We hold our employees to high standards of excellence and expect their words and actions to reflect those core values not just while they are at work, but at all times.”

Just last week, Richland County School District One parents expressed outrage when one parent posted what many are calling a “disturbing” social studies assignment on slavery and the Civil War.

The fourth grade writing prompt from Bradley Elementary School (in Columbia, South Carolina) instructed children to “choose to be a slave or slave owner” and to “write a journal entry that describes your daily activities before the Civil War.”

Richland One was not the only South Carolina government agency to fire an employee over racist remarks this week after peaceful protests turned violent in Columbia and Charleston, South Carolina.

Darlington County Clerk of Court Jonna Carter was fired Monday after allegedly posting comments that said “… shoot their a**, lock them up, stop their food stamps… take their children… they are showing their true colors… I’m upset about what happened but I would not destroy someone’s property… they are a piece of s***!!!!” about the protesters,” the Post and Courier reported.

Thousands are calling for the University of South Carolina to expel an alleged student who posted the following Snapchat (below) calling black people “gorillas” and saying to shoot them because they are destroying the city of Charleston.

According to the Daily Gamecock, University of South Carolina officials are investigating the post.