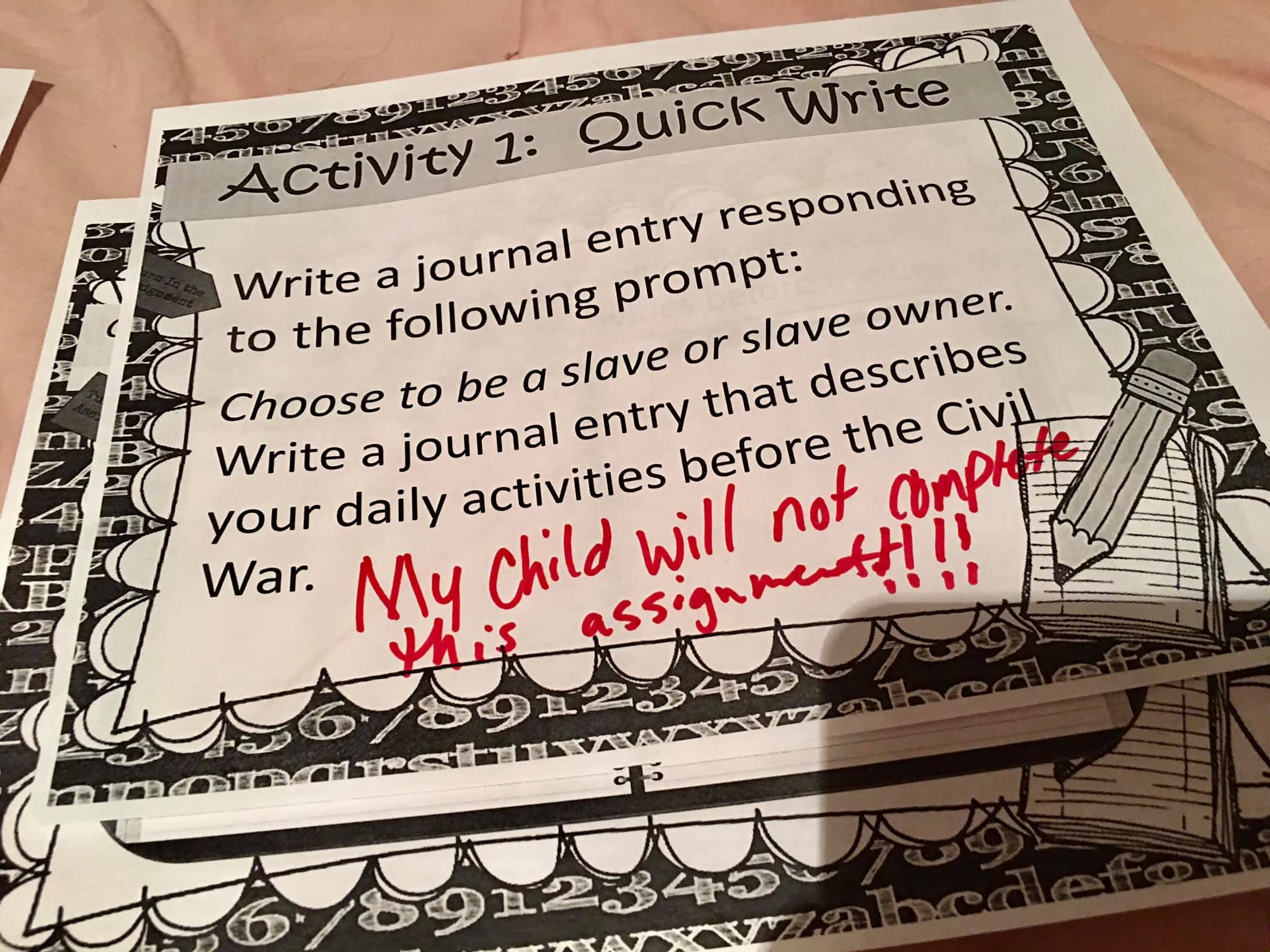 Some Richland County School District One parents are outraged and demanding answers after one parent posted what many are calling a “disturbing” social studies assignment on slavery and the Civil War.

The fourth grade writing prompt from Bradley Elementary School (in Columbia, South Carolina) instructed children to “choose to be a slave or slave owner” and to “write a journal entry that describes your daily activities before the Civil War.”

Ursula Harris posted photos of the assignment on Facebook.

“So me and my daughter completing her eLearning assignments, to turn in this week and look at this foolishness for Social Studies???? Richland County School District One what the world is this??”

Harris refused to have her child complete the assignment.

“I was disgusted and offended,” Harris told FITSNews, saying it was especially inappropriate for children of color to be told to complete the assignment with so little context and no discussion.

One parent on Facebook called the assignment “horrendous and damaging for children” and said she hated the fact her child completed it without her knowing.

According to Richland One School Board Commissioner Lila Anna Sauls, the assignment was brought to the district’s attention more than a month ago when the homework packets were sent out to elementary school students. This week, students are working on turning in make up work that was assigned earlier in the semester.

Sauls said it was state-mandated curriculum that the district ultimately deemed inappropriate after reviewing.

The district pulled the assignment, but due to a “communication issue” the assignment was not removed from all of the schools’ e-learning curriculum sites.

The post sparked intense discussion and debate about what history is appropriate for fourth graders to learn — and what material is inappropriate to learn in the distance setting due to COVID-19.

While some argued that it was a part of history, others said it was out of line to expect a fourth grader to do an assignment like this on their own without an adult to appropriately explain the context.

“It was how it was presented- not the lesson,” one parent on Facebook said. “Kids alone at home with no teacher…when you ask ‘Are you the slave owner or the slave’ you automatically perpetuated a division that needed to be handled in a classroom with a teacher there to moderate.”

But parents such as Harris see this as a bigger problem with a lack of communication between parents and district officials. Harris told FITSNews that despite a communication error, parents should have been emailed about the assignment when it was allegedly deemed inappropriate and taken down.

“Richland District One have dropped the ball big time on this situation,” Harris said. “At the end of the day no one communicated to us parents. Whoever responsible for the lesson plans dropped the ball and need to be held accountable.”

FITSNews reached out to the Richland One Communications Department earlier Tuesday and has not received official answers to our questions as of press time.

Hours after FITSNews reached out to the district, we are told that executive communications director Karen York sent out an email to fourth grade parents that said “your child may or may not have received this assignment” that was “inadvertently included in the fourth grade learning packet.”

“To support teachers in accommodating this short timeline, our Teaching and Learning department provided 10 sample lessons in every grade and core subject in elementary and middle grades and in many high school courses,” Richland One officials said in a Facebook post. “Teachers could choose lessons for the first few days of e-Learning instruction from the samples provided, although teachers were free to develop their own.”

“In very quickly pulling together learning activities for students to complete at home, the sample lesson activity on slavery was inadvertently included in the fourth grade social studies learning packet. The activity was inappropriate and should not have been included. Students should not complete the activity and their grade will not be impacted by leaving the activity blank or removing it from the packet,” Superintendent Dr. Craig Witherspoon said in the release.

“We regret that this occurred and apologize for any offense taken by any of our students or parents,” Witherspoon said in the email to parents.

Richland One is the fifth-largest district in the state that has an annual budget of more than $337 million. The district has been heavily criticized for what parents call excessive spending and lack of transparency .

The school district has seen a flood of bad press in recent months. To combat this, Richland One Superintendent Craig Witherspoon wrote a February email bashing the media for the way they’ve covered the district recently.

“What can we do about that?” he wrote to Richland One staff members about the bad press.

Witherspoon then suggested that Richland One staff can help this image problem by telling “the real Richland One story and consistently share information with our parents, community members, the news media and others about all the great things we have happening in our district.”

To recap on Witherspoon’s background:

Just two days after we published our investigative story on “lavish” spending and lack of transparency at Richland County School District One, the district held a red-carpet event that recorded a net loss of at least $20,937.12 in tax dollars, according to recently released documents.