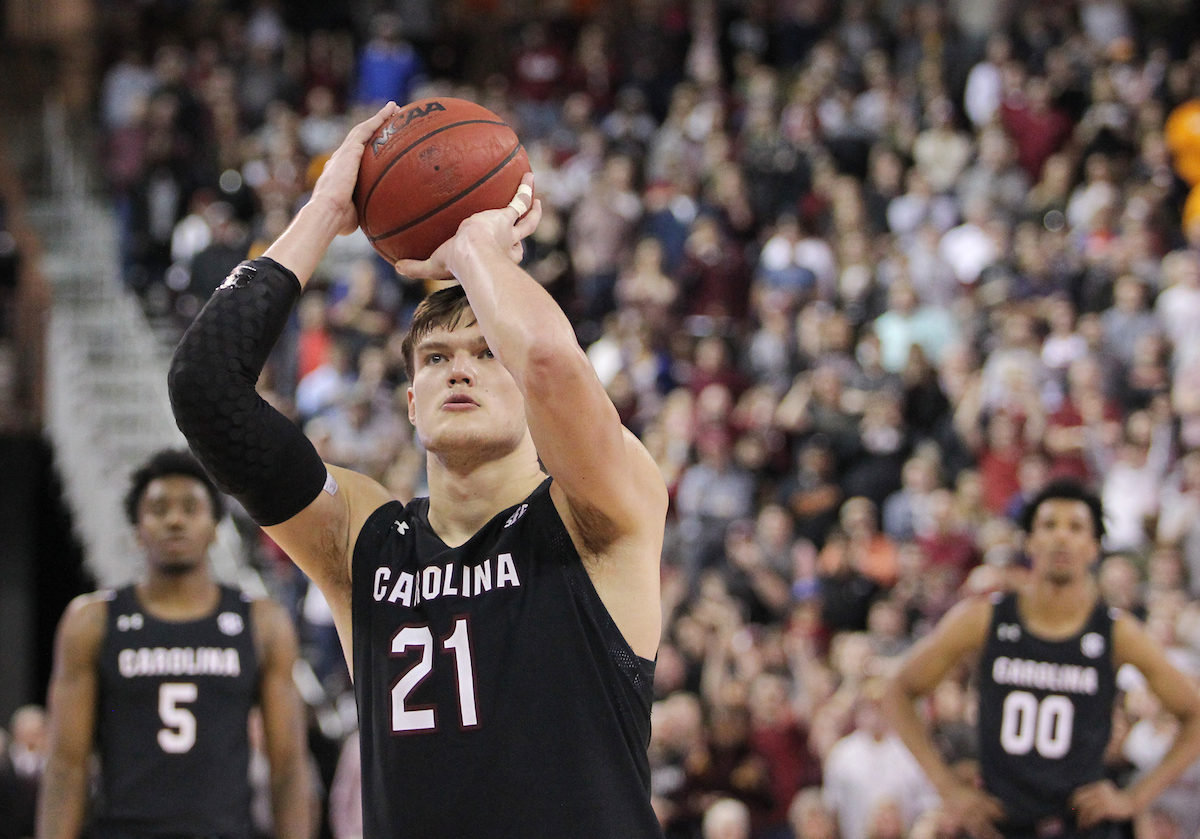 The University of South Carolina men’s basketball team is officially on the bubble to make the 2020 NCAA tournament – which would mark the program’s first postseason appearance since its historic (for South Carolina, anyway) run to the Final Four in 2017.

Head coach Frank Martin – who has grown frustrated in recent years by his team’s failure to capitalize on that success – must be pleased with the way his 2019-2020 squad is responding to early adversity (including embarrassing home losses to Boston University and Stetson that could still wind up derailing its tournament dreams).

On Saturday afternoon in Columbia, S.C., the Gamecocks (16-9, 8-4 SEC) pulled out a thrilling come-from-behind win over head coach Rick Barnes’ Tennessee Volunteers (14-11, 6-6 SEC) – the latest in a string of conference victories. The 63-61 victory put South Carolina smack dab in the middle of the sugary sweetness that is the NCAA Tournament’s “bubble.”

Martin’s team nearly gave the game away thanks to its chronic free throw woes. For those of you keeping score at home, out of 350 NCAA Division I programs South Carolina ranks No. 345 in free throw percentage – connecting on just 61.5 percent of its shots.

Against all odds, senior forward Maik Kotsar drained four straight shots from the charity stripe over that span to seal the comeback win. The 6-foot-11 senior from Tallinn, Estonia led the Gamecocks with 13 points – his sixth consecutive game in double figures.

Kotsar also had eight rebounds, a pair of assists, a block and a steal in thirty-eight grueling minutes of action against the Volunteers – who squandered junior John Fulkerson’s career high 25 points in a loss that effectively killed their postseason hopes.

For South Carolina, it was yet another clutch win in a stretch of solid play … begging the question of just how good this team could be if it were able to hit free throws.

Frank Martin’s team has won eight of its past 10 and now sits at 8-4 in SEC play. The Watch has seen a bubble résumé or two in its day, but let the record show that South Carolina has one exceptionally strange profile. Yes, the Gamecocks’ NET ranking is low (mid-60s), but no lower than what Indiana was showing before the Hoosiers beat Iowa and no one was worked up over IU being invited to this bubble party. No, what’s really strange is not one but two Quad 4 losses at home, to Boston University and Stetson. Nevertheless, the Gamecocks are here, making a charge and touting their wins over Kentucky and Virginia.

Can South Carolina stay on the bubble, though? Or will its postseason chances go “pop?”

Gamecock fans will not have to wait long for an answer as Martin takes his team to Starkville, Mississippi on Wednesday night for its final midweek road game of the season against the Mississippi State Bulldogs.

Head coach Ben Howland’s team is also 16-9 overall and has a comparable 7-5 record in conference play – meaning this game has huge “bubble” implications for both squads. The same might also be said of both teams’ regular season finale on March 3 at the Colonial Life Center in downtown Columbia, S.C.

Sandwiched between these two Mississippi State games are home tilts against No. 25 LSU (February 22), Georgia (February 26) and a road game against Alabama (February 29), which is also on the bubble.

Stay tuned … we look forward to seeing whether Martin and the Gamecocks can break through and make another deep postseason run following two disappointing seasons on the hardwood.

UPDATE: Not a good start …