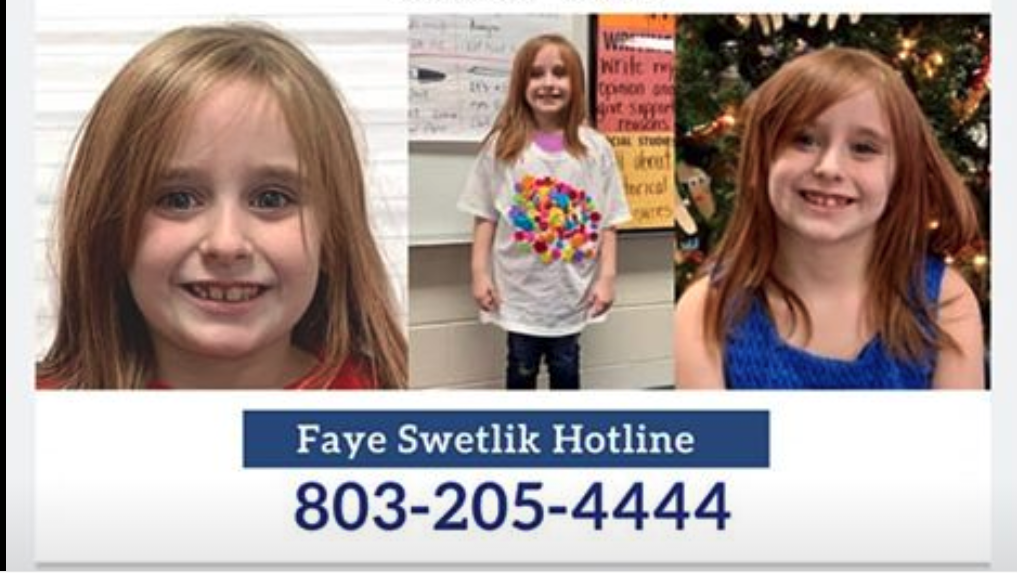 Editor’s note: Here is the latest update in the Faye Swetlick case.

On Wednesday morning, law enforcement officials continued their search for 6-year-old Faye Marie Swetlik who disappeared from outside of her Cayce, South Carolina home Monday afternoon.

After their extensive 24-hour search —with more than 250 law enforcement officers and first-responders from more than 20 different agencies including the FBI and South Carolina Law Enforcement Division (SLED) — Cayce Department of Public Safety officials said they have found no evidence that Faye was abducted.

“Faye’s mother, her mother’s boyfriend, and father have been cooperative with us and the other agencies,” Cayce Police Chief Byron Snellgrove said in the press conference. “Her parents are anxiously waiting her return.”

Helicopters were seen circling the area throughout the day Tuesday. SLED officials have sent regional investigative agents, a tracking team including bloodhounds, and an aviation unit to search for the missing girl, according to sources. Those search efforts will continue.

Asked why investigators were keeping the search for Faye limited to a 1-mile radius, Snellgrove said because it was possible she walked off, fell in the woods somewhere, or could still be at a neighbor’s home.

“We haven’t ruled anything out,” the Cayce Police official said Tuesday evening.

“We’re here to find Faye,” Snellgrove said, describing her as bubbly. “…Everybody loves Faye. When she walks into a room, Faye lights it up.”

Snellgrove said investigators have received some surveillance already and they’re following up with all leads.

Faye is a first grader at Springdale Elementary School in West Columbia. She has strawberry blonde hair and blue eyes. She has a speech impediment and is lactose intolerant. She is 3-foot-10-inches tall and about 65 pounds.

Officials confirmed with FITSNews Monday night that the FBI was working with local law enforcement agents on the case. Snellgrove said at the press conference they invited the FBI as they have agents who specialize missing children cases.

WIS journalist Caroline Hecker reported earlier Tuesday that she saw FBI agents on the property where Faye was last seen. She wrote that they were “closely examining the back porch” and WIS reported that “Investigators have towed two cars away from the property. “