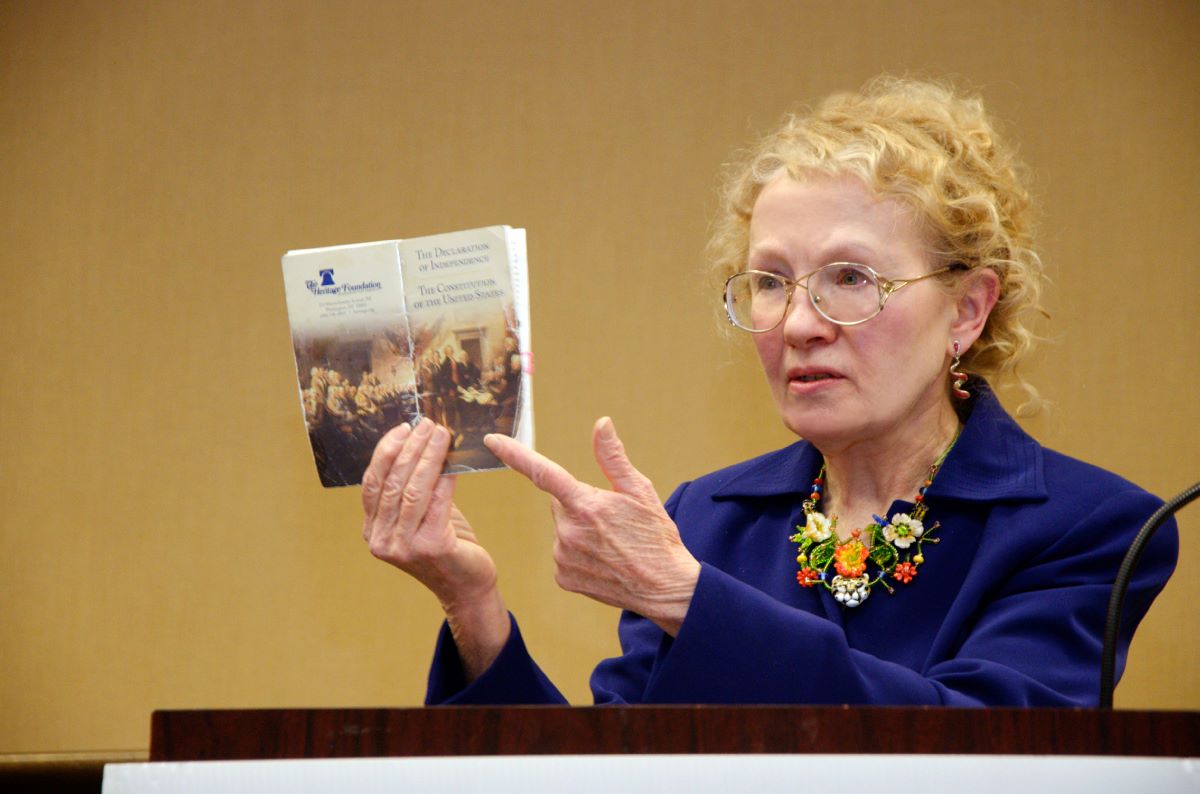 Her name is Joanna Ruth Martin, but she is known in conservative circles by her pen name – Publius Huldah. Publius, of course, is a Latin praenomen, or personal name … albeit for males. Huldah? She was a prophetess who made a brief appearance in the Old Testament (2 Chronicles, specifically, during the reign of King Josiah).

Huldah … or rather Martin … will make an appearance this week at the South Carolina State House as part of a hearing related to the convention of states issue, something this news outlet has been covering in recent months.

Her position? She opposes such a constitutional confab …

According to Martin, the whole point of a convention of states (or Article V Convention) is to “get a new constitution for this country” – one which would legalize the so-called “transfer of sovereignty” implicit in the recently negotiated United States-Mexico-Canada Agreement (USMCA). According to her, this agreement “transforms the United States from a sovereign nation to a member state of the North American Union” (emphasis original).

“Americans don’t want another constitution, and they don’t want to be moved into the North American Union,” she wrote.

No, but … is that really what is happening here?

Martin has accused supporters of an Article V Convention of attempting to manipulate conservatives into believing the convention of states issue is focused on limiting the power of the federal government.

Specifically, she accused “those financing the push for a convention” of being globalists who do want to limit federal power – just not in the way conservatives are expecting.

“(D)emagogues in the pay of (g)lobalists have convinced constitutionally illiterate Americans that the solution to all our problems is to get an Article V convention,” she wrote (emphasis original).

“They intend to do it by transferring the powers our Constitution delegates to the federal government (plus the powers reserved to the States or the People) to the global government which they are setting up over us,” she alleged (emphasis original).

As frequent observers of black helicopters, however, we are not going to dismiss these views out of hand … nor are we going to delve into the ad hominem drama associated with Martin’s former husband Frank Scutari, who had some unsavory ties to white supremacist organizations.

Our guess is her opponents will bring those ties up on their own.

Martin gets her say on this issue just like anyone else, as far as we are concerned … and who she used to be married to strikes us as wholly irrelevant to the topic at hand.

Since the Constitution was ratified, thirty-three amendments have been approved by congress and sent to the states – of which twenty-seven have been ratified.  Only one amendment – the eighteenth amendment prohibiting the manufacture and sale of alcoholic beverages – has ever been repealed. All of these amendments were proposed by a two-thirds vote of the U.S. Congress, however for an amendment to be ratified – irrespective of its origin – it must be approved by three-fourths of all states.

Convention of states’ supporters worry if similarly themed “convention applications” sent to the U.S. congress do not contain identical wording, federal lawmakers will use these discrepancies as an excuse to reject the application.

Our view? We haven’t really come down on one side of this issue or the other – although we have rebuked concerns raised by S.C. governor Henry McMaster, who believes a convention of states might deprive Americans of their Second Amendment right to bear arms, among other essential liberties.

As for Martin’s objections … we don’t even know where to start.

We will continue to educate ourselves on this issue, although as we noted in our last treatment of it the efficacy of a constitutional convention of any sort escapes us …

“Given the extent to which the government of the United States has already driven the country off of a cliff … we are not sure it matters much anymore who is driving the car (or in which direction they are steering it),” we noted last month.