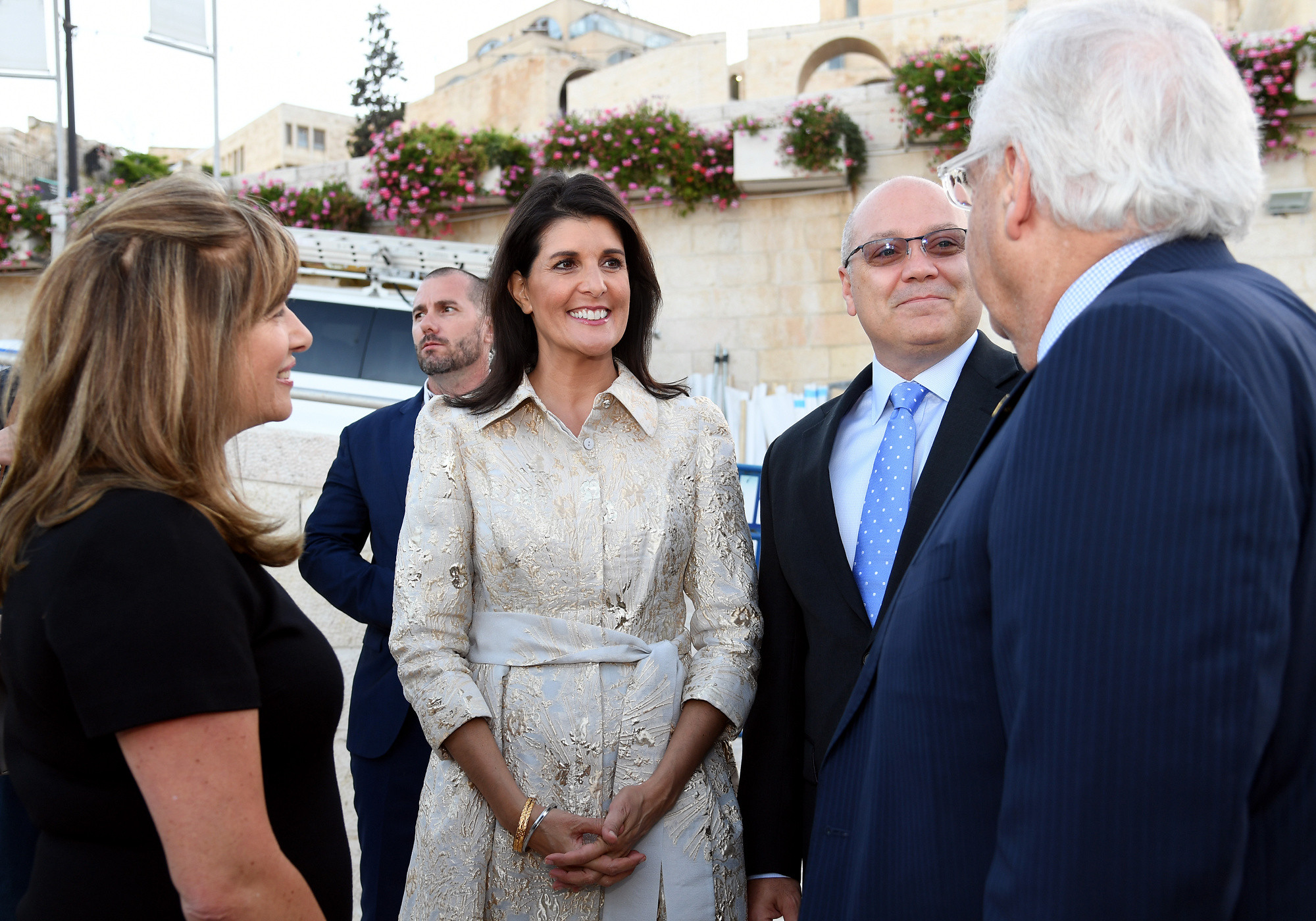 Former United Nations (UN) ambassador and prospective 2024 Republican presidential candidate Nikki Haley hasn’t hit the right notes in her effort to remain relevant on the national stage ahead of the next presidential election.

First there was the curious “palace intrigue” she employed in launching her latest book … a move which cost her the support of many of her establishment GOP allies without really gaining her much ground at the other end of the Republican spectrum. This was followed by a less-than-helpful rehash of her conflicted views on the Confederate flag, which also pointed to needless political polarization (which Haley blamed on the “vulture media,” of course).

The bigger picture? As she sizes up a 2024 bid, Haley remains stuck in the middle of two divergent GOP constituencies – supporters of U.S. president Donald Trump (many of whom remain deeply suspicious of her) and members of the warmonger establishment who have tried repeatedly (and unsuccessfully) to destroy the president.

You know, these are the same people who told us there were weapons of mass destruction in Iraq … and who want to continue plowing more American blood and treasure into an un-winnable war in Afghanistan.

Actually, Haley isn’t so much stuck in the middle as she is firmly in the camp of the warmongers.

Anyway, Haley’s latest gambit involves a recapitulation of her personal evolution as a person of faith.

Why should anyone care about Haley’s faith?

Good question … but the former ambassador’s recent appearance on a “Journeys of Faith” podcast with ABC’s Paula Faris has revived scrutiny of the evolving religious representations she has made over the course of her political career.

“The faith itself is a very kind, peaceful faith,” Haley told Faris of Sikhism, the religion into which she was born. “It’s one that’s all-accepting. They believe in one God.”

Haley added that her parents made her “go to different churches – Methodist, Baptist, Catholic,” advising her to “respect everyone and how they do their prayers, but understand there’s one God, but everyone has their own pathway.”

As for Sikhism, Haley told Faris she could “feel God in the room, but I couldn’t understand it because I didn’t know the language.”

(Via: Times of India)

Haley – who paid “obeisance” at Sikhism’s holiest shrine during an economic development trip in 2014 – claims to have converted to Christianity when she began dating her husband, Michael Haley.

“All of a sudden there was not just the feeling but it was the words that I could relate to that really meant something to me,” Haley told Faris. “If I wanted to have a stronger relationship, I needed to have something that spoke to me.”

The Haleys were married in two ceremonies – one Sikh, one Christian.

“The Sikh faith acknowledges other religions,” Haley told Faris. “It acknowledges Jesus, that Jesus was the Son of God.”

We have found nothing to support this claim, although some Sikhs have referenced an “intersection” between Jesus Christ’s teachings and those of Guru Nanak and the other authors of the Sikh faith.

“In my mind (Jesus) is an enlightener, and though I may not see him as one of the Ten Sikh Gurus, he is a distinct and vital parallel who continues to play a very significant role in my life as a Sikh,” Nikki Singh wrote for the BBC in 2009.

However, Singh went on to explicitly reject the notion that Christ was the son of God.

“Personally, I find it hard to understand how the God of Genesis becomes the biological father of Christ in the Gospels,” she wrote. “According to Genesis, God creates the earth, animals, Adam and Eve – but he remains distant and far away. How can this totally transcendent God become the Father of Christ? How can he beget Jesus?”

Playing fast and loose with religious views would be nothing new for Haley. Longtime readers of this news outlet will recall the “Trikki” way she handled the discussion of her conversion from Sikhism to Christianity during the infancy of her political career.

“Haley and the Sikh faith were an important part of her storyline … back in 2004,” CBN’s David Brody observed in 2010. “But today there are no Sikh references are on her website or campaign literature. And that website language has become more overtly Christian. When asked to specifically address why Sikh references were more overt in 2004 than in 2010, (her campaign manager) didn’t provide us with an answer to that question.”

One county party chairman referenced inconsistencies in Haley’s faith narrative back in 2010, saying the future South Carolina governor “can’t seem to make up her mind about her faith.”

“It’s not my place to question her faith, but I do question her honesty,” former Pickens county GOP chairman Phillip Bowers wrote in an email back in 2010.

That was our assessment, too.

“We don’t care if Haley’s a Sikh or a Christian,” we wrote at the time. “She could worship the devil and howl at the moon for all we care. The question – as it always seems to be with Haley – is whether she’s been honest about what she believes.”

“If anyone finds the truth, please let me know,” Bowers wrote at the end of his 2010 email to GOP primary voters.

A decade later, we are still looking for the truth …. on a host of Haley-related fronts, incidentally.

Whatever she believes, Haley clearly has no problem invoking faith as a part of her political narrative – particularly as it relates to her “leadership” following the 2015 “Holy City Massacre,” the racially motivated murder of nine black parishioners at a church in Charleston, S.C.

From her interview with Faris …

I was so desperate. I remember praying to God, saying, ‘I don’t know how to get through this, I need You.’

Had it not been for my faith, had it not been for God touching me and saying, ‘I’ve got you,’ I would not have gotten through that. I know that without a question. I know how God has saved me way more times than I can count.

While we do not claim to know Haley’s heart, that strikes us as pouring it on a bit thick …

Again, Haley’s faith makes no difference to us. At all. And while it is everyone’s right to vote for their “leaders” based on anything that moves them to do so – we believe anyone who decides to cast a ballot for (or against) a candidate on the basis of their personal religious views is mis-prioritizing things.

So why are we writing about it?

Well, first and foremost because Haley is making a big deal about it.

Beyond that, though, we are writing about it because of the reason Haley is making a big deal about it: As much as may not matter to us (ideologically speaking, anyway), faith still matters a great deal to a great many Republican, independent and Democratic voters. But it especially matters to conservative Republicans.

Obviously being a Mormon didn’t keep Mitt Romney (above) from winning the Republican presidential nomination in 2012, but it probably did keep him from winning it in 2008 … and there is a case to be made that it did not help him in his losing general election battle against Barack Obama.

“Romney was never Christian enough for some Republicans,” a fall 2019 headline from columnist Nancy French blared.

French did conclude her column with a bit of fire and brimstone for Trump defenders as it related to Romney (who was Haley’s candidate of choice in both 2008 and 2012).

“If evangelical leaders really demanded Christian values in their president, they’d stop calling evil good and good evil,” she wrote. “They might also be ashamed that (Mormon) Romney stands up for Christian values more than Trump and his sycophants combined.”

So … will Haley stand up for Romney (who was the only Republican to vote in favor of convicting Trump during the partisan impeachment process)?

That is another question she should probably prepare to answer …

We will continue to keep a close eye on questions surrounding Haley’s faith as she continues to build her national profile … not because it impacts our views on her as a potential candidate (it doesn’t), but because the inconsistencies in her conversion narrative could create Romney-esque problems for her down the road.

And because those inconsistencies, if fully explored/ exposed, are part of a broader pattern of dishonesty that could ultimately jeopardize Haley’s status as the preemptive GOP frontrunner in 2024.