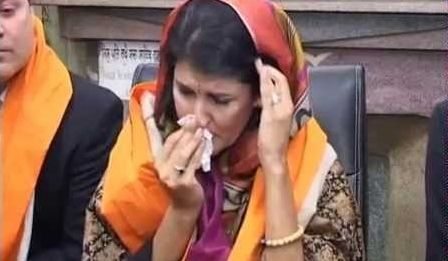 By FITSNEWS || “The soul of Nikki Haley” is reported to have “cried out” during her visit to the most sacred site in Sikhism – the religion South Carolina’s governor abandoned for Christianity as she climbed the political ladder in the socially conservative Palmetto State.

According to The Daily Sikh , Haley became “overwhelmed and emotional” upon her visit to Harmandar Sahib – where all Sikhs come to “pay obeisance.”

For Sikhs, paying obeisance involves making a pilgrimage to the sanctum sanctorum of the Harmandar Sahib – a.k.a. the “Golden Temple.” Before paying obeisance in the temple, however, devotees must take a holy dip in the water pond of Temple at the marbled periphery – with the understanding that this holy dip washes away “all their bad deeds of previous births.”

A video taken after the visit shows the governor – decked out in ceremonial Sikh garb and wearing a “Bindi” – breaking into tears at a press conference following her visit.

“I don’t know if I want to do pictures – this has been an emotional and very special day for both of us,” Haley says in the clip. “What I want everyone to know is that we are here to give our respects.  I am not here as governor.  I am here as someone who feels honored and emotional to be here.  It is a very special day.”

In a matter of moments, though, Haley had composed herself sufficiently to discuss her visit.

“It took me forty years but it was worth the wait,” she said.

Haley is in India for a ten-day “economic development” visit.

Here’s the clip of Haley and her husband, Michael Haley, following their visit to the temple …

According to Haley, she grew up as a practicing Sikh but converted to the Christian faith when she married her husband Michael in 1996.  As recently as 2011 she claimed to visit the local Sikh Temple occasionally – purely out of respect for her parents.

In April 2010, Haley’s website addressed her faith as follows:

Question: Is Nikki a Christian?

Truth: Nikki is a Christian. In her words: ‘I believe in the power and grace of Almighty God. I know, and have truly experienced, that with Him all things are possible. I have looked to Him for leadership throughout my career and will continue to do so as governor.”

In June 2010, however, the wording on the website was changed to reflect a much stronger pro-Christian position.

Question: Is Nikki a Christian?

Truth: In Nikki’s words: “My faith in Christ has a profound impact on my daily life and I look to Him for guidance with every decision I make. God has blessed my family in so many ways and my faith in the Lord gives me great strength on a daily basis. Being a Christian is not about words, but about living for Christ every day.”

After her election in 2010, many Punjabis urged Haley to come to her parents’ homeland as soon as possible in order to “pay obeisance” at the holy Sikh temple.  Haley waited until after her reelection to make the trip, though.

The Haleys visit wasn’t without controversy, though.  A member of the Sikh clergy riled his contemporaries by presenting Haley’s husband with his “siri sahib” – a ceremonial sword carried by Sikh males.  The clergyman handed Michael Haley his sword after the First Couple knelt and kissed his feet.

“It is wrong and violation of maryada,” another priest said, referring to Sikh law.