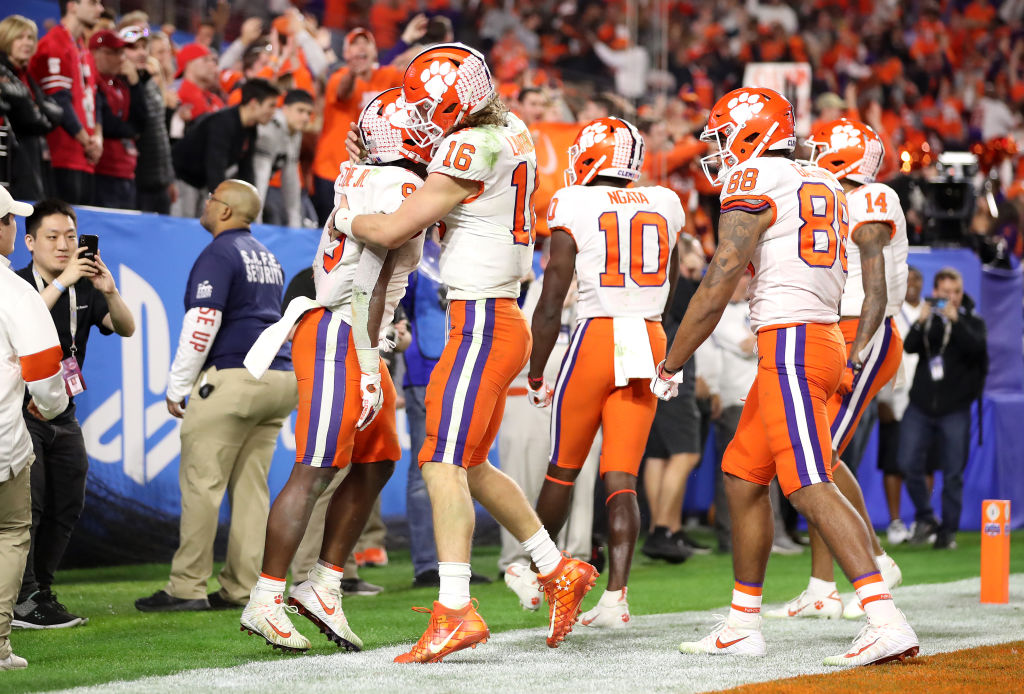 It used to be the term “Clemsoning” meant something vastly different. Five years ago, that word had become nearly synonymous with choke artistry … with snatching defeat from the proverbial jaws of victory. Clemson University’s football team had become the definitional “coulda, shoulda, woulda” program – winning ten games four years in a row and recording four straight Top 25 finishes (including a top ten finish in 2013) but always failing to break through to the next level.

Then, on a wet weekend in October of 2015 – in a game that almost never happened – Swinney’s Tigers buried that term with a gut-check 24-22 victory over No. 6 Notre Dame in front of 82,415 storm-drenched fans at Memorial Stadium. That win – punctuated by a memorable last-second defensive stand – propelled the Tigers to the first of their record-tying five consecutive College Football Playoff (CFP) appearances.

And while they would lose to Alabama in the championship game that year, the following season they would conquer the Tide for their first title in 35 years. Two years later, Clemson would eviscerate Alabama for its second championship of the Swinney era – becoming the first team in modern college football history to go 15-0.

Over the past five years, Swinney’s squads have posted an astounding 69-4 record – including the program’s current 29-game winning streak.

It took another memorable last-second defensive stand to preserve that streak on Saturday night at the Playstation Fiesta Bowl in Glendale, Arizona. In a CFP semifinal matchup against No. 2 Ohio State, the third-ranked Tigers rebounded from a 16-0 deficit with less than three minutes remaining in the first half (and a 23-21 deficit in the final two minutes of the game) to punch a ticket to their fourth championship game in five seasons.

In addition to a game-clinching interception from junior safety Nolan Turner (moments after he was beaten for a touchdown by Buckeyes’ wideout Chris Olave), the Tigers also got a program-defining 94-yard drive – one capped by quarterback Trevor Lawrence’s 34-yard strike to two-time ACC player of the year Travis Etienne.

Channeling former Florida quarterback Tim Tebow, Lawrence faked a quarterback draw before pulling up and hitting the 5-foot-10, 210-pound speedster from Jennings, Louisiana as he released out of the backfield.

Etienne did the rest of the work – blazing by Buckeye defenders en route to pay dirt, part of a bizarro statistical night that saw him lead the Tigers in receiving (three catches, 98 yards, two touchdowns) while Lawrence led the team in rushing (16 carries, 107 yards, one score).

Whatever it takes, right?

Even more impressive than Lawrence’s on-field performance (which included a 67-yard touchdown gallup) was the leadership he showed on the sidelines. The 6-foot-6, 220-pound signal caller – who has yet to lose a game as a starter – huddled his offensive teammates prior to the game-winning drive just like former Tigers’ quarterback Deshaun Watson did four years ago in the waning moments of the national championship, exhorting them and inspiring them with his sheer will to win.

It worked … again … but how, exactly, was this latest game-winning drive program-defining?

Because this time it was expected.

“Even though it was an amazing drive, being around here this long, it was not surprising,” said Clemson offensive coordinator Jeff Scott, who will become head coach at South Florida after the national championship game next month. “It would have been more surprising if we had not gone down and scored, and I think that says more about these guys than anything.”

Let that sink in …

“It would have been more surprising if we had not gone down and scored.”

That, ladies and gentlemen, is the new “Clemsoning.” Not just winning the gut check games … but knowing you are going to win no matter how long the odds appear.

“In the end, our guys showed what they’re made of,” Swinney said. “They’ve got the heart of a champion, they’ve got the eye of a tiger.”

Indeed they do … although standing between Clemson and another title is No. 1 LSU, which plays its home games on a field emblazoned with a tiger’s eye. Led by Heisman Trophy winner Joe Burrow, these Tigers showed their resolve by dismantling No. 4 Oklahoma on Saturday in the other national semifinal game – with Burrow throwing for seven touchdown strikes and more than four hundred yards in the first half.

The 63-28 beatdown Burrow and company administered to the Sooners in the Chick-fil-A Peach Bowl marked LSU’s record-setting sixth victory over a top ten team this season.

“We go into every game thinking nobody can stop us,” Burrow said after the game. “That’s the way we think. We think we need to score every time we touch the ball. If we don’t, then we’re still kind of chasing that perfect game. It’s always something to get better at, and today was a lot of fun, but still room to improve.”

LSU will be a heavy favorite entering the championship game – which is scheduled to kick off at 8:00 p.m. EST on Monday, January 13 at the Mercedes Benz Superdome in New Orleans, Louisiana.

We shall see … but don’t be surprised to see the new “Clemsoning” continue.