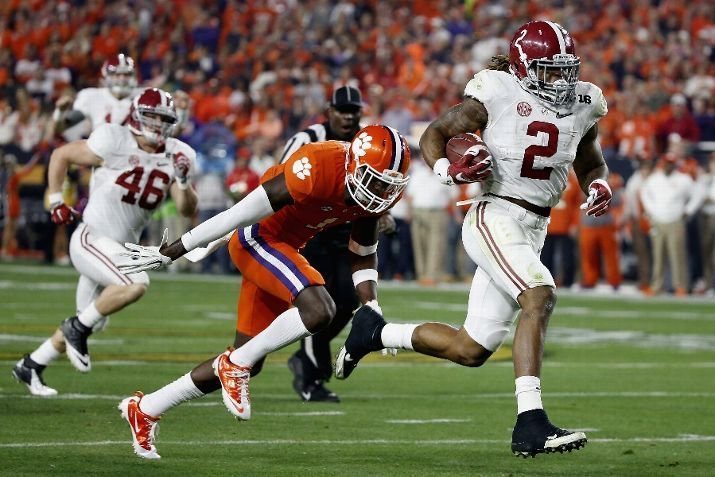 They “brought their own guts,” as their head coach likes to say, but Clemson University’s national championship dreams came up just short.

Still, Clemson and Alabama staged a college football classic before a sold-out University of Phoenix Stadium in Glendale, Arizona – fighting down to the wire for the second trophy of the NCAA Division I-A playoff era.

Head coach Dabo Swinney‘s Tigers – seeking to become the first 15-0 team in major college football history – were undone by their own special teams’ miscues in the fourth quarter of this thrilling national title tilt.  As a result, the program’s 17-game winning streak came to an end – as did its streak of 51 straight victories when taking a lead into the fourth quarter.

Meanwhile Alabama (14-1, 7-1 SEC) claimed its fourth national championship in seven years under head coach Nick Saban – who had to roll the dice to pull out this win. And who then cracked a rare sideline smile when his big gamble paid off …

Clemson (14-1, 8-0 ACC) appeared to be en route to its second national championship – leading the Crimson Tide 24-21 as the third stanza drew to a close.  Alabama quarterback Jake Coker was clearly rattled by the Tigers’ punishing pass rush – and the Tide’s Heisman Trophy-winning running back Derrick Henry had been effectively bottled up during the second half by Clemson’s stultifying rushing defense.

But facing a critical third-and-eleven with 11:35 left to play from its own 44-yard-line, Coker – under heavy pressure – heaved up a prayer down the right sideline.  The ball was miraculously caught by a twisting, turning ArDarius Stewart – a thirty-eight yard reception that gave coordinator Lane Kiffin‘s squad the yardage it needed to kick a game-tying field goal.

What happened next will haunt Tiger fans for years to come …

“The onside kick was huge,” Saban said after the game.  “It was a great kick by Griff. I think that changed the momentum of the game.”

Clemson gathered its composure and answered the Tide touchdown with a field goal drive – cutting the Alabama margin to 31-27 – but then special teams’ disaster struck again for the Tigers.  Senior running back Kenyon Drake took the ensuing kickoff and ran it back ninety-six yards for a touchdown – covering the last five years with a diving leap past Tigers’ safety T.J. Green.

Now trailing 38-27, Clemson showed its resolve once again.  Quarterback Deshaun Watson – who carried his team on his shoulders all night – led the Tigers down the field on an eight-play, 75-yard drive that ended with a 15-yard touchdown pass to Artavis Scott.

Watson came up two yards short on the two-point conversion attempt, but his heroics cut the lead to 38-33 with 4:40 remaining.

Now all Clemson needed was a stop …

Unfortunately for Tiger fans, they didn’t get it.  Instead, Coker hit Scott for a 63-yard strike that set up the Crimson Tide with a first down at the Clemson fourteen-yard line.  Three plays later Coker – not known for his mobility – picked up a gutsy first down on the ground (enabling Kiffen’s offense to run precious seconds off of the clock).  With just over a minute left Henry scored his third touchdown of the night to give Alabama a 45-33 advantage.

Still refusing to quit, Watson again marched Clemson down the field for another answering touchdown – but by the time the Tigers struck pay dirt only twelve seconds remained on the clock.  Once Clemson’s own onside kick attempt sailed out of bounds – the celebration was on in Tuscaloosa.

Henry finished with 158 yards on 36 carries – becoming the first running back in SEC history to eclipse the 2,000-yard mark in a season.

The Secular Humanists Are Coming After Clemson Football Again