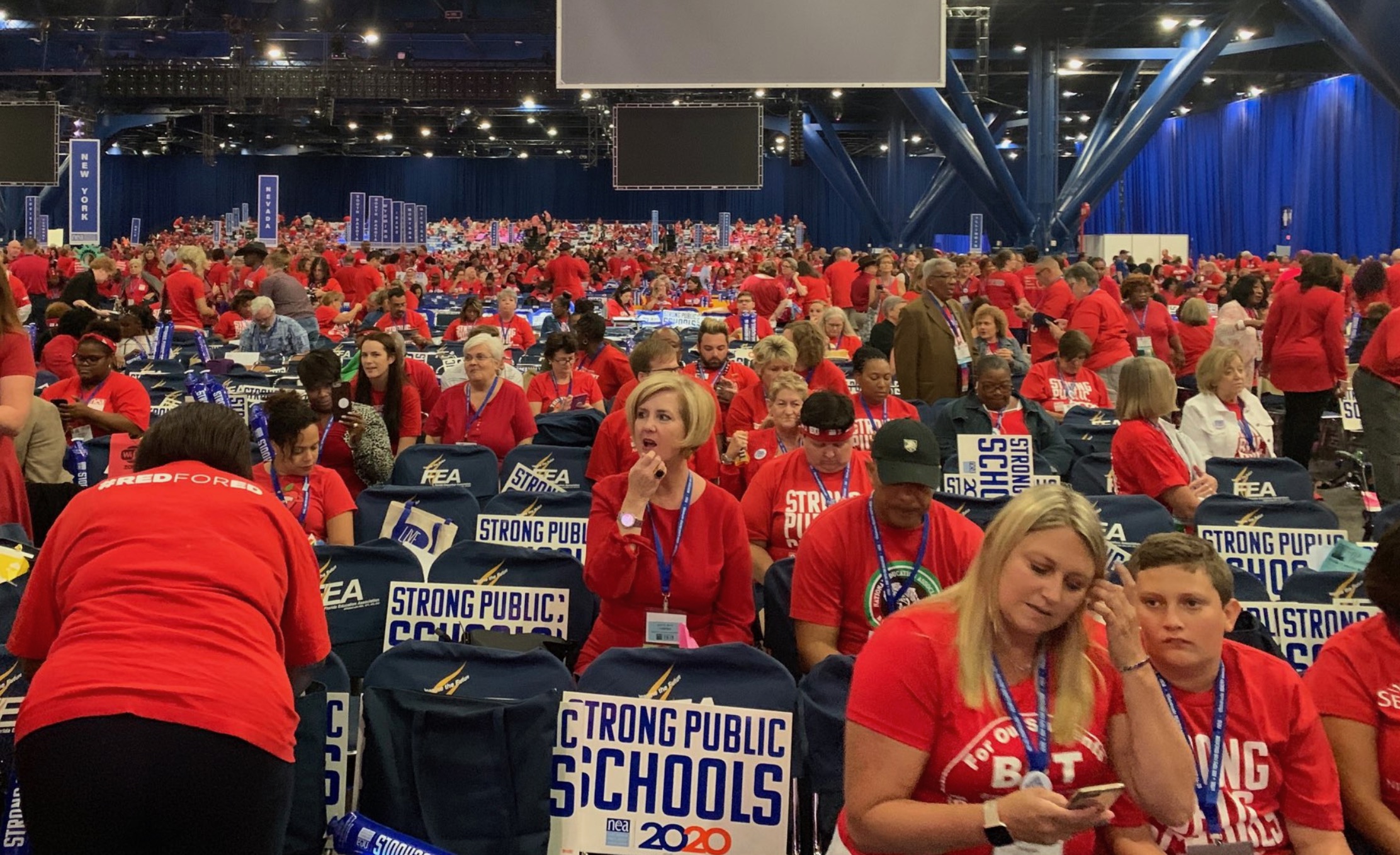 Back in February, national news outlet Breitbart ran a lengthy piece about how the so-called #RedForEd movement was nothing but socialist front geared toward impacting next year’s national elections.

“Its stated goals – higher teacher pay and better education conditions – are overshadowed by a more malevolent political agenda: A leftist Democrat uprising designed to flip purple or red states to blue, using the might of a significant part of the education system as its lever,” Breitbart’s Michael Patrick Leahy noted.

Sadly, South Carolina “Republicans” caved almost completely to the demands of this liberal union, while taxpayer-funded institutions of higher learning were busy breathlessly promoting its propaganda.

Basically, the Palmetto State fell hook, line and sinker for the scam …

As for the education debate, this news outlet has repeatedly argued against adopting the policy positions of this liberal union, arguing they would put failed practices of the past on steroids.

“Pouring billions of dollars in new money into the same failed bureaucracies (and approaches) year after year after year is not change … it is simply forcing taxpayers to pay more for what we know from decades of experience isn’t working,” we wrote earlier this year.

Meanwhile, all Republicans ever do in South Carolina is pay lip service to real reform – i.e. the sort of market-based accountability required to reorient our worst-in-the-nation government-run school system. Even arch-conservatives like former U.S. senator Jim DeMint have surrendered on this front – embracing half-measures over comprehensive reform.

Against this depressing backdrop, we take note of the representative assembly meeting of the National Education Association (NEA) – Red for Ed’s parent organization – which took place this month in Houston, Texas.

At this meeting, NEA representatives adopted a number of “new business” items related to its ongoing advocacy.

One of these items? An endorsement of abortion on demand.

Here is the full text of the approved item …

Through existing media channels, the NEA will honor the leadership of women, non-binary, and trans people, and other survivors who have come forward to publicly name their rapists and attackers in the growing, international, #MeToo movement.

Furthermore, the NEA will include an assertion of our defense of a person’s right to control their own body, especially for women, youth, and sexually marginalized people. The NEA vigorously opposes all attacks on the right to choose and stands on the fundamental right to abortion under Roe v. Wade.

As its rationale for the item, the group claimed “the most misogynistic forces” under U.S. president Donald Trump are trying to “abolish the gains of the women’s right movement.”

“Women’s leadership is essential for any successful egalitarian movement and therefore must be protected,” it added.

Irrespective of your views on abortion … what on earth does this have to do with a debate over education policy?

Adopting hard-left positions that have nothing to do with education is nothing new for this organization, though.

Consider this excerpt from a piece published last summer in National Review by Frederick Hess and Grant Addison:

The NEA adopted 122 total New Business Items, including commitments to promote the Black Lives Matter Week of Action (including supporting BLM’s demand that “ethnic studies be taught in pre-K-12 schools”), to support “a strategy postponing confirmation of a Supreme Court justice until after the mid-term election,” and to encourage teachers to assign readings that “describe and deconstruct the systemic proliferation of a White supremacy culture and its constituent elements of White privilege and institutional racism.” The NEA also promised to respond “in support of and in solidarity with immigrant families who are separated, incarcerated, or refused their legal right to request asylum due to the heartless, racist, and discriminatory zero-tolerance policies of the Trump administration.”

In addition to these hard-left positions, the group has also presented awards to former Democratic presidential nominee Hillary Clinton and former San Francisco 49ers’ quarterback Colin Kaepernick, whose 2016 decision to kneel during the playing of the national anthem kicked off a massive culture war.

To be clear: We do not begrudge the NEA (or its members) for adopting any of the liberal positions outlined above. The organization can advocate on any front it wishes, although we believe the more often/ wildly it veers outside of the classroom and into political/ social issues the less credible/ effective it will be in advancing education policy.

Which may not be a bad thing, ultimately …

The mystery to us is how Republican-controlled legislative leaders – and an ostensibly pro-Trump governor, Henry McMaster (above) – have allowed their education “reform” agenda to be co-opted by such a radically liberal movement. And how the mainstream press in the Palmetto State refuses to report on the underlying radicalism … or the co-opting.

Or the historical failure of “Mo’ Money, Mo’ Problems.”

It is also curious the amount of leash Trump continues to extend to McMaster – whose chestnuts he rescued from the fire a year ago.

How is McMaster repaying him? By awarding a multi-million dollar handout to one of his fiercest culture war critics and carrying the water for the South Carolina affiliate of the NEA, a group that clearly has it out for Trump on virtually every front.

Bottom line? We can agree to disagree on abortion, immigration, social justice and any number of other hot-button issues, but when it comes to improving academic outcomes in the Palmetto State there is no debate: The policies championed by the NEA and adopted by South Carolina “Republican” leaders have yielded nothing but costly failure … for decades.

Which is why we oppose doubling down on these failed policies … and engaging the power of the free market for a change.

Alan Clemmons Gets Shot Down Again