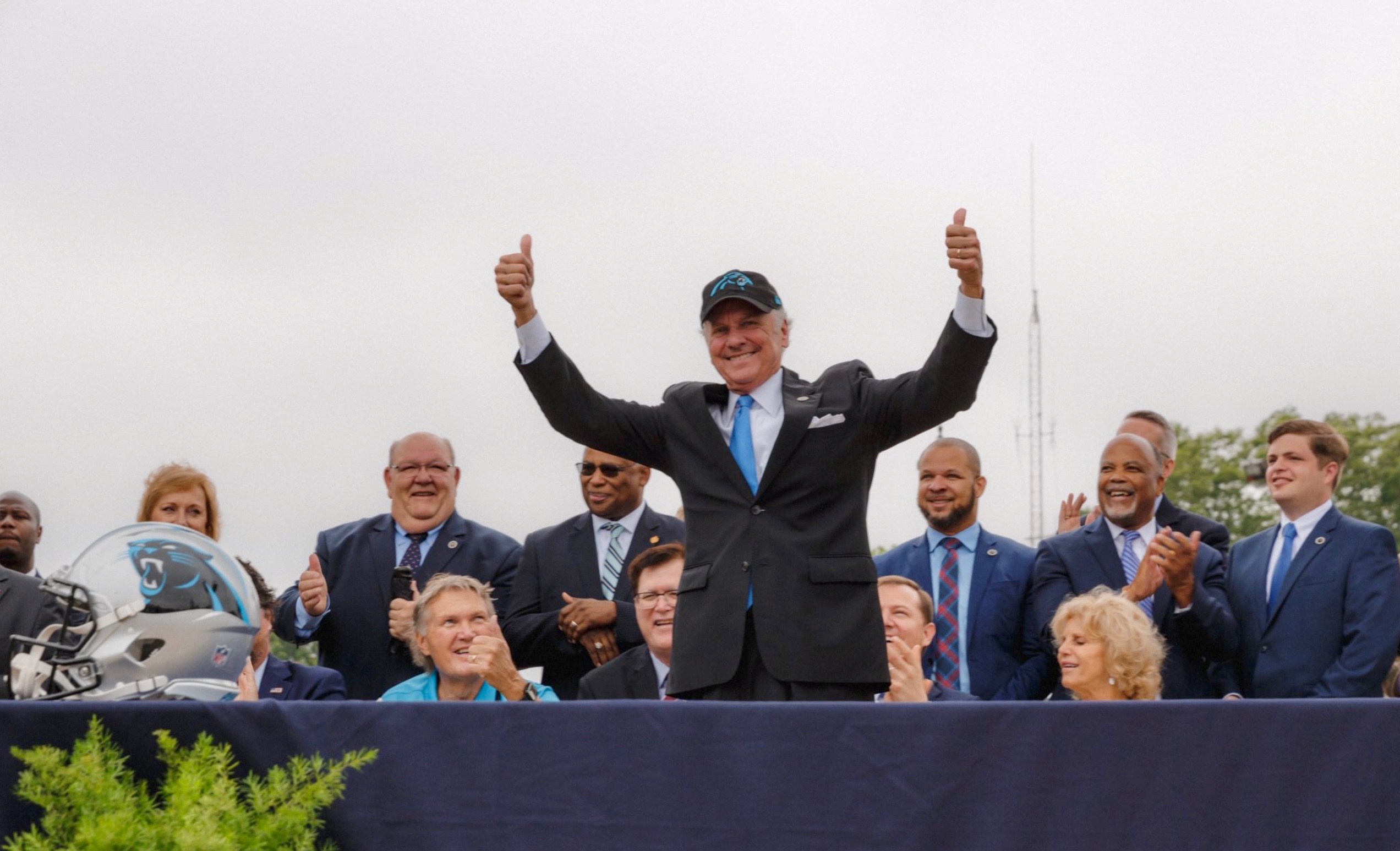 At the event, McMaster touted his administration’s decision to fork over tens of millions of tax dollars to liberal billionaire David Tepper – owner of the National Football League (NFL)’s Carolina Panthers.

In return, Tepper is pledging to locate the Panthers’ corporate headquarters in Rock Hill, S.C. – and to move its practice facilities from Spartanburg, S.C. to Rock Hill.

“Touchdown South Carolina” one Upstate media outlet giddily proclaimed, echoing the incessant cheerleading on behalf of this project by local “journalists” over the last few months.

Not everyone in the press was thrilled, though …

“There’s one thing I can’t get past, and that’s this: Throughout the process, it seems there’s been little discussion and even less regard for what this change means for Spartanburg,” columnist Bob Dalton of The Spartanburg Herald-Journal noted. “Not when the Panthers announced plans to build a new headquarters and practice facility. Not when it was announced they had found a site. Not when the state legislature debated giving the team a tax break to bring it all to Rock Hill.”

Indeed … Spartanburg got completely shafted. And no one seems to care.

Not counting that lost revenue, this tax break is of dubious economic value … unless you happen to be a wealthy, connected congressman who owns property adjacent to this complex (or a politician collecting checks from Tepper).

McMaster and S.C. commerce secretary Bobby Hitt continue to claim the Panthers’ facility will create 5,715 new jobs and have an economic impact of more than $3.8 billion. However, another estimate commissioned by Democratic state senator Dick Harpootlian (below) revealed the state’s projections were “unfathomably high” and that the project would only create around 200 jobs.

Whatever the return on investment winds up being, it doesn’t change the fact South Carolina has no business making such an investment in the first place.

Tepper is the richest owner in the NFL – worth more than $11 billion. In other words, he does not need tax breaks to subsidize this facility. Nonetheless, he convinced McMaster and state lawmakers to fork over an estimated $160 million – right before he sold his ownership share in the Pittsburgh Steelers for nearly that same amount.

Also let’s not forget $40 million of this handout will go toward a totally unnecessary interchange on Interstate 77 at a time when there are glaring infrastructure needs elsewhere in the state.

There are political calculations to consider, too. Remember, Tepper has previously called McMaster’s chief political ally – U.S. president Donald Trump – a “demented, narcissistic scumbag” and “the father of lies.”

That should make for some interesting conversation the next time McMaster calls upon Trump to bail him out politically. It also has the makings of an extremely effective political hit on McMaster, who absent his “Trump card” would have lost the 2018 GOP gubernatorial nomination to Upstate businessman John Warren.

The biggest problem McMaster is facing, though, has nothing to do with economics or politics.

It is a problem of expectations.

Over the past few months, media outlets have plastered the internet with hundreds of headlines proclaiming “The Panthers are coming to South Carolina.” Some of these headlines have made it clear the team is merely relocating its corporate offices … many have not.

See the potential issue? Thousands of South Carolinians are convinced McMaster has landed the Palmetto State an NFL franchise. Our guess is there will be a letdown when they realize this is not the case.

Actually, an attempt was made to force the Panthers to play two of their eight home games in the Palmetto State each year as a condition of receiving these incentives – but lawmakers declined to include that stipulation in the $160 million giveaway.

As a result the Panthers will continue to play all of their home games at Bank of America stadium in Charlotte, N.C., as they have since 1996.

“With each new crony capitalist handout to billionaires like Tepper, the likelihood of substantive tax relief being provided to middle income South Carolinians (i.e. the small business owners that truly power our economy) diminishes further,” we noted earlier this year. “If we have said it once, we have said it million times … even when government picks a ‘winner,’ there are losers. And in South Carolina, we are tired of seeing deals like this that further erode the ability of small businesses to compete in the economy.”

Your Money Is Funding Anti-Marijuana Billboards