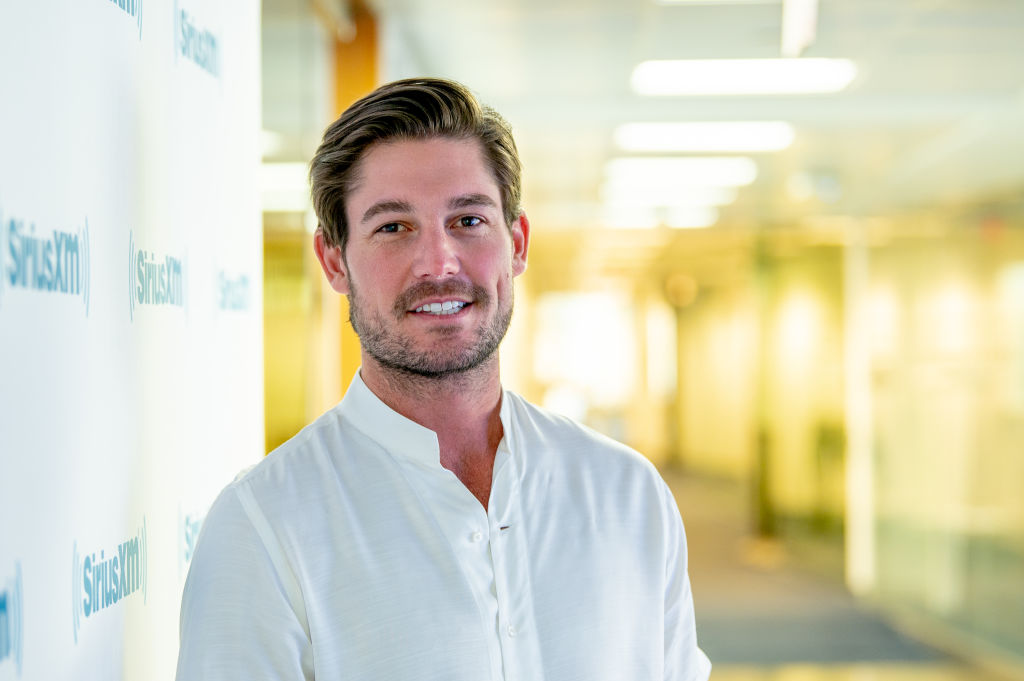 by AMY FEINSTEIN || Remember that rollercoaster I referenced in last week’s recap of the sixth season of Bravo TV’s Southern Charm? Well, it’s not off the tracks yet, but I would steer clear if I was near the Craig Conover car, because he is having a serious Holden Caulfield moment where I really believe he thinks he’s the catcher in the rye, the only one who understands the dangers of not following his rules. Craig’s experiences and relationships set the standard, and because he can’t be friends with his ex, nobody else can dammit! Even for the sake of poor Gizmo.

So, there are now two Craigs – human, unraveling Craig, and cute as hell French Bulldog Craig. To keep it simple, I’ll use a Coca-Cola analogy from the eighties: We have Original Craig and New Craig. But which one has peed on Shep Rose’s carpet, I don’t know.

As an animal lover with years of experience owning a veterinary hospital, I won’t be banging on at Shep about New Craig, except to say he should spend more money on a hands-on trainer and less on toys and outfits. And please, don’t let him use your hands as a chew toy. Good luck, God bless, and hire a dog walker.

As Shep sets up New Craig’s crate, I can picture him setting up a crib or a
bassinet. I’ll look at this optimistically and think that this is a step toward more responsibility?

On to Austen Kroll and Chelsea Meissner attempting to fish from the pier with janky poles and live bait. Maybe it’s a metaphor. Probably not. Chelsea is an outdoors girl who grew up with this stuff, killed it on Survivor, and is probably thinking that in the mind of Shep, she falls into that category of “white trash hairdresser,” which yes, he admits to saying, and qualifying that “white trash” means redneck, but in Shepology, we are still not exactly sure what a redneck is.

Austen seems genuine and is searching for answers, and Chelsea has a few, speaking with authority as Austen’s ex. Yes, Austen is that guy who wants to, in a perfect world, stay friends with an ex. According to Original Craig, this will be his undoing.

Austen says that his sometimes girlfriend Madison LeCroy wanted him to punch Shep for that comment, and Chelsea concurs. Personally, I think Madison should have punched him, or at least showed him what a dirty martini shower feels like (like he doesn’t already know). It’s not going to happen. The worst these prep school boys do is throw hotdogs, unless there is a lot of liquor flowing. It’s always the ladies with the chutzpah. Nothing personal Shep, but I think you are overdue for and old-fashioned black eye, or maybe the classic Thomas Ravenel head butt. Arnica cream is good for the bruising, and a pack of frozen peas.

Back to the car with Shep and Cameran Eubanks, and the best he can do about the “white trash” comment is explain that he doesn’t say it to their face. And that’s better how? If you won’t say it to their face, don’t say it. Dude thinks he’s Lord Grantham and Madison is Daisy, the scullery maid who is still suspicious of electricity. You are a confirmed bachelor without a job, and she’s a single mom who is out there working her butt off. Respect.

Cam’s Shepsplaining is old. I get it, he’s your friends no matter what, but is there anything that is disqualifying? For a guy I mean. You’d drop a girl in a hot minute. Sorry not sorry. Unconditional is for men and those who are male-adjacent.

Austen knows Chelsea is telling it like it is, telling Austen that Shep hasn’t been that good of a friend, and he’s sure using Naughty By Nature’s “OPP” as a credo.

He’s down with OPP, and you have to decide what to do when he touches, let’s call it “Property” that belongs to you. This conundrum is pretty much chock full of music cues, or maybe I just needed to wash the “OPP” out. Let’s move on to The Lovin’ Spoonful, “Did You Ever Have To Make Up Your Mind.” You can’t have it all Austen, at some point, you have to pick. Real friends should be happy if you are happy, and not running their own agenda.

The rest of the song is a bit sexist, but the tune is catchy and you get the point. Chelsea’s right, Craig: Shep is your drinking buddy and sometimes wingman (unless he’s using you as live bait) and he and Craig want you with them on their island of lost boys and not listening to a girlfriend (or God forbid an ex-girlfriend). We are back to the saying about friends being for a season, a reason, or a lifetime. Figure out the category and move on. Personally, I think that Miss Madison is more horsepower than you can handle at this time, but you do you.

Shep picks up New Craig, who is seriously cute.

Naomie Olindo and Kathryn Calhoun Dennis meet up at a meditation place called Still to chill. Naomie has been attempting meditation to shrug off the negative Craig juju, and though she wishes him well, it’s been a lot to move on from, and I don’t think she wants to admit there is some PTSD, especially in continuing to see him in a group setting. For Naomie, there is no going back. She lived, she learned, she sees a future with a man with a job. No matter what she does, Craig won’t get it.

Onto hypnosis, or yoga nidra, or meditation. After hearing the positive affirmations Kathryn tears up, and realizes she has a lot of negative to wash away from her off-and-on dealings with the father of her children.

At the end of the session, talk turns to Craig (Original Craig), who isn’t moving on, despite Naomie’s relationship with Metul Shah, which is heading somewhere, as she wants to be “Mrs. Dr. Metul.” Kathryn says Craig still doesn’t think they had to break up (if you don’t see it yet, you will during his outburst at Cam’s party).

Craig found what he perceived as a missing piece to his puzzle. He found a girl who is attractive, smart, and in a good financial state, and he was seeking the male version of the MRS degree, and with Naomie, the suit fit. He could live in a lovely house, travel, dine out, etc, without pulling his weight. Okay, I have to say it, Craig is a sugar baby, or at least wants to be, and Naomie wants a man who comes to the relationship as a whole.

Danni Baird and KD are back together, and all is well with the world, and the ladies are going to Cameran’s 35th birthday party which is a daytime oyster roast with the whole crew, including Eliza Limehouse and her older man boyfriend, Don (notice a pattern here?).

Now, both Craigs will be at this fete, and so I will warn you that it’s Original Craig the guy, and not New Craig, the puppy, who has a complete meltdown and tantrum. New furry Craig is very well behaved in his jeans jacket.

Cameran warns the guests at the party that Original Craig is in rare form, and will be popping off at the party, dropping f-bombs and more, deflecting his actual mental health situation onto Austen and others. Paging Anna Heyward, Original Craig’s emotional support person. Dude, aren’t you sick of being everyone’s project?

Original Craig arrives with back up support, says hi to the dogs, and we’re off. Austen tells Chelsea he was home before 11:00, and this sets OC off, calling Austen a pet name for a cat.

Who knew the party was oysters and a show? OC is name calling, and looking for someone to blame, and Austen has decided he’s not it. OC says being friends with your ex is “bat sh*t crazy,” all because he can’t move on himself. Keep in mind where Holden Caulfield is when he’s telling his story. It’s not a new boarding school.

Kathryn and Danni arrive, and KD’s coat is seriously shucking everything (and I want it). They arrive just as OC is going through the field of rye and approaching the cliff.

Naomie smiles with the “not my monkey, not my circus” look on her face.
Cameran is loaded, and Chelsea, with the line of the night, yells out “You need to hide your crazy!” Don’t we all Chelsea, don’t we all.

Shep and Austen pitch a group trip to Colorado to do some skiing. Naomie is out, mostly because of Craig.

Shep, New Craig, and Naomie leave, and Austen and Original Craig go yet another round. OC is still fired up, and not taking the advice of his favorite movie, Frozen (Let it go, Let it go). Maybe the setting in Colorado will let him find his inner snow princess?

Austen leaves, because he’s had enough, but OC is still rolling. In his confessional, he blubbers on about how Naomie might have cost herself
the “best thing” that ever happened to her. So he’s concerned about what she’s lost? Hmmm. yep, just taking notes.

Craig believes his best trait is that he could always get off of work (umm, it’s easy when you are not fully employed) and Metul has that pesky job as a doctor. Well, looking at Miss Naomie’s Instagram (above), they seem to find the time, so as my mama would say, you worry about yourself!

On the scenes from next week, it’s a party, at Eliza’s, with guns, and Thomas Ravenel’s sometimes girlfriend Ashley Jacobs, who comes to piss in everyone’s Cheerios. “Plan B” is there to make the most of her last 15 minutes. And Whitney Sudler Smith will be there, to let Ashtray know she stepped over the line when she came for his mama. Good for you, Whit!

See you next week, when Sybil reappears at the shooting party. Ooh, maybe it will be like an Agatha Christie murder mystery! Country house, check, weapons with lots of fingerprints, check, alcohol, check, motives? Check check check!

It will be a party in the old town next week!

The Radioactive Truth Of HBO’s Chernobyl