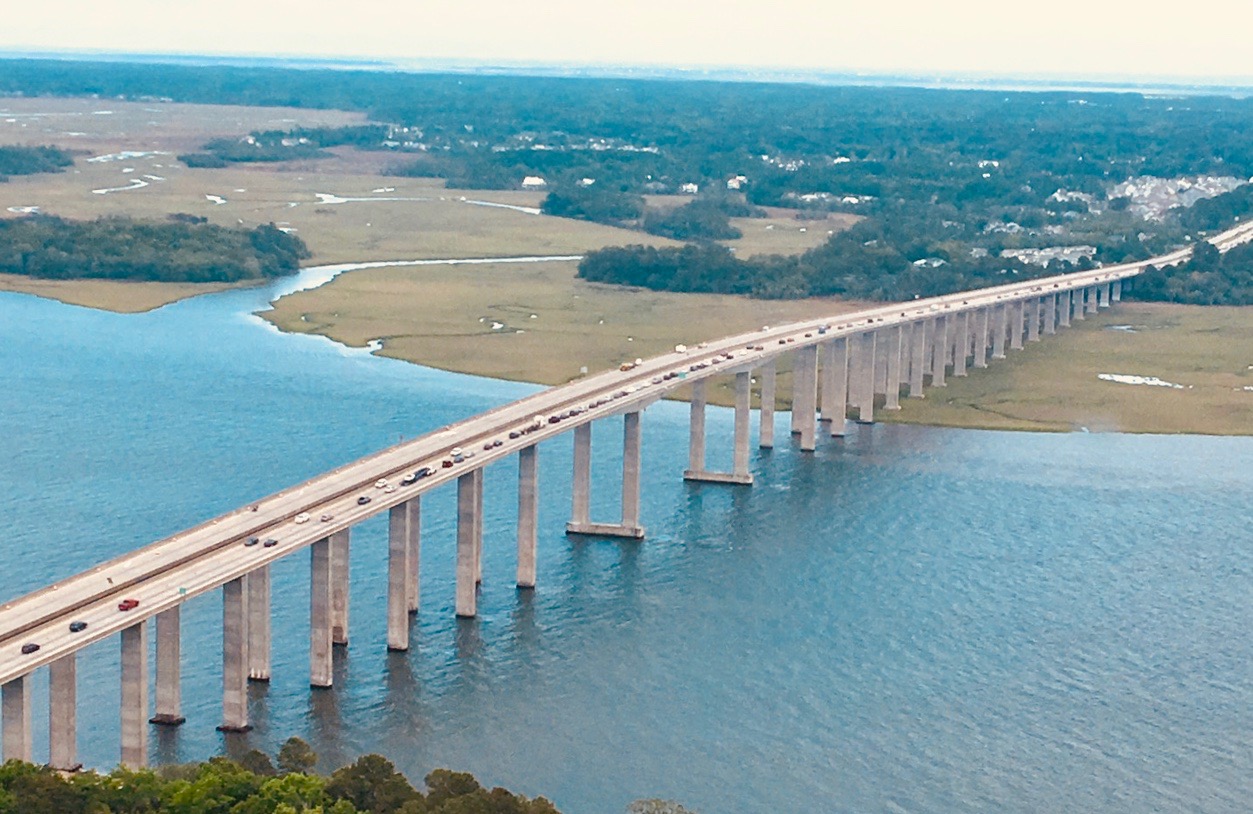 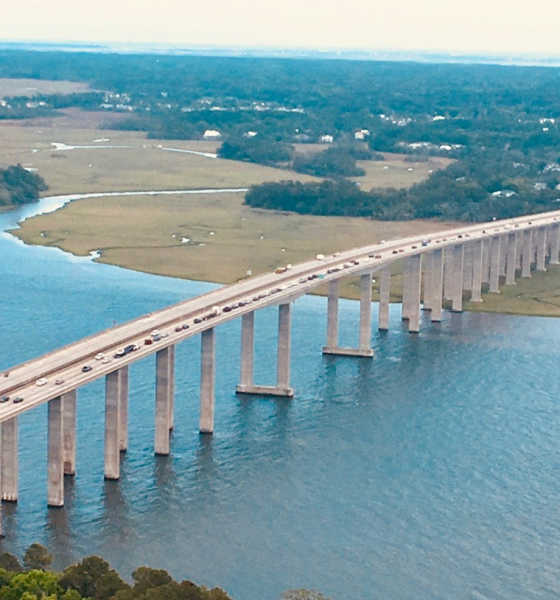 The gadfly is back … and he is buzzing and stinging on a matter of particular concern for residents of the South Carolina Lowcountry.

Ned Sloan – founder and chairman emeritus of the S.C. Public Interest Foundation (SCPIF) – is on a mission to hold state transportation leaders accountable for the debacle that shut down the James B. Edwards bridge over the Wando River for several weeks earlier this year.

Remember this drama?  We do …

This news outlet was on the cutting edge of that scandal, exposing in detail how transportation officials were negligent in monitoring and maintaining the cables that bear this bridge’s weight (and the weight of the traffic that passes over it).

In May of this year, one of the bridge’s eight main steel tendons snapped – along with one of its eighty-four secondary cables.  Meanwhile other cables on the bridge showed signs of damage due to corrosion.  Construction projects are underway to replace all of the cables, but is the bridge safe to travel over in the meantime?

Built nearly three decades ago by the S.C. Department of Transportation (SCDOT), the Edwards bridge is actually two bridges – a pair of segmented spans that take Interstate 526 across the Wando between Mount Pleasant, S.C. and Daniel Island, S.C.  In addition to serving tens of thousands of vehicles daily, the spans are the central arteries to and from the Wando Welch Terminal – part of South Carolina’s government-run port system (which like SCDOT has a history of negligence).  At least 7,000 trucks cross the bridge per day, we’re told.

As we noted back in May, the bridge’s cables corroded as a result of unsealed ducts – which allowed water and salt (used in bridge de-icings) to seep into their protective casings.  Prior to the May incident, another one of the bridge’s cables snapped in October 2016 – prompting SCDOT to conduct more extensive monitoring and to limit traffic over the span.

Sloan believes this was the moment the agency “should have formed an opinion of the stability of the superstructure of the bridge and published it to inform the public of the extent of its safety.”

SCDOT didn’t do that, though.

As our exclusive reporting revealed, concerns over these tendons dated back years.  In one article, we revealed engineers at SCDOT had reportedly been briefed on issues with the bridge’s cables as far back as the fall of 2010.  In a follow-up report, we revealed SCDOT actually had concerns about the cables dating back to 2002 – when the agency sought federal funding for an acoustical monitoring program aimed at “inspecting the strands for breakage.”

Meanwhile a 2012 report uncovered by Anne Emerson and Drew Tripp of WCIV TV-4 (ABC – Charleston, S.C.) detailed “improper grouting of the ducts that encase the tendons” as well as “leaky bridge joints,” “clogged drainage holes,” “cracks in the piers that support the bridge” and “debris in the voids of the concrete foundation boxes … where the main cables are housed.”

No wonder several Lowcountry lawmakers expressed concern earlier this year that the Edwards bridge was in need of being replaced, not just repaired. 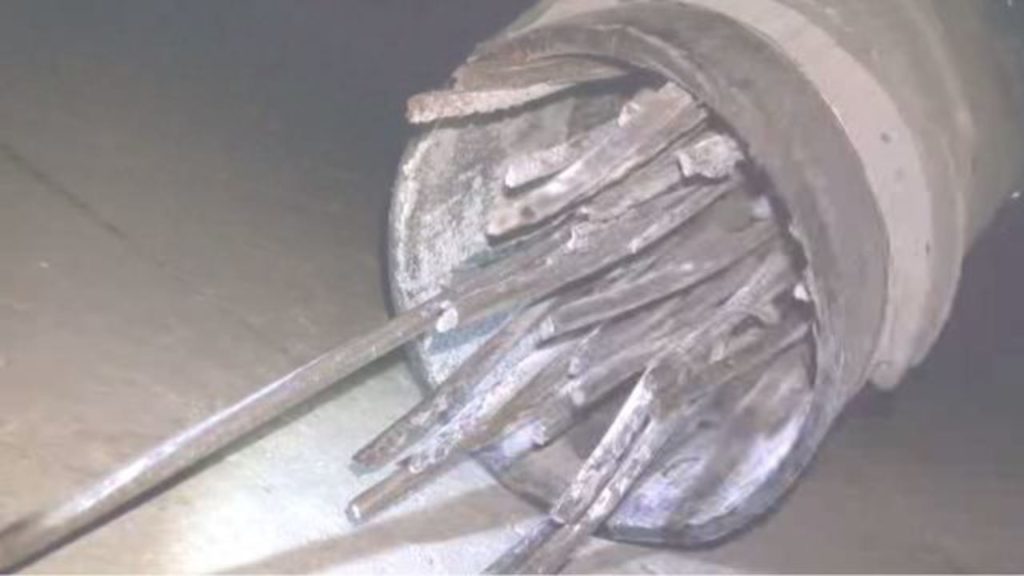 More ominously, SCDOT is said to have received a verbal recommendation from the Federal Highway Administration (FHWA) to close the bridge prior to the most recent cable failure – but agency officials “ignored (the) recommendation.”

Sloan?  He will not be ignored …

A self-described good government “gadfly,” Sloan takes his nickname from Plato’s description of the great philosopher Socrates – who described himself as “the gadfly of the Athenian people” with a duty to “sting” the state into taking the proper course of action.

“The state is a great and noble steed who is tardy in his motions owing to his very size, and requires to be stirred into life,” Plato wrote, putting words into the mouth of his mentor. “I am that gadfly which God has attached to the state, and all day long and in all places am always fastening upon you, arousing and persuading and reproaching you.”

Stinging, in other words …

The scandal over SCDOT’s negligence with respect to the Edwards bridge has died down considerably in recent months, but Sloan – whose court cases have had a profound impact on government accountability – is continuing to prod transportation bureaucrats.  He is concerned about the structural integrity of the spans, which are currently in the midst of repairs projected to last into next summer.

“SCDOT is making efforts to reduce the progress of corrosion that caused these partings,” Sloan wrote in a September 17 memorandum provided to this news site and other media outlets.  “Despite these efforts, I suspect that additional partings are likely to occur.”

In other words, Sloan is saying the Edwards bridge remains at high risk for additional cable breakage – which would further threaten the stability of the structure over the course of its months-long repair process.

Is he right?  Good question …

Sloan’s biggest concern is that SCDOT doesn’t appear to have put sufficient thought into this question – at least not in publicly available documents.

“I assumed that SCDOT had solicited expert opinions of that stability,” Sloan wrote in his memo.  “Using the Freedom of Information Act, I requested from SCDOT a copy of opinions that it had received.  SCDOT admitted that it had solicited such opinions, but it had no public record because it solicited them only verbally.  SCDOT admitted that it had received such opinions and gave citations of them.  I requested copies of the cited public records, not citations.  SCDOT responded with a copy of several letters that did not include any opinion about stability.”

In a letter to SCDOT secretary Christy Hall last month, Sloan noted that the cable breakages should have caused the agency to “immediately form an opinion, informed by the opinion of more than one outside expert, of the stability of the superstructure of the bridge.”

According to Sloan, the fact that no such written opinions were in possession of the agency (as of August 27, anyway) indicates SCDOT “failed to give sufficient attention to the threat of a major calamity.”

What sort of calamity are we talking about here?  Sloan says he believes “there is a significant possibility that continuing corrosion will cause additional partings of external tendons.”  If enough of those tendons collapse, it could result in a “sudden collapse” of the bridge.

Around the time Sloan was trying to get to the bottom of SCDOT’s internal efforts to asses the stability of the bridge (or lack thereof), agency officials were just beginning to install acoustical monitoring equipment aimed at detecting the breakage of the bridge’s encased cables (the sort of monitoring it originally discussed implementing sixteen years ago).

This equipment will not be operational until early next year, though. 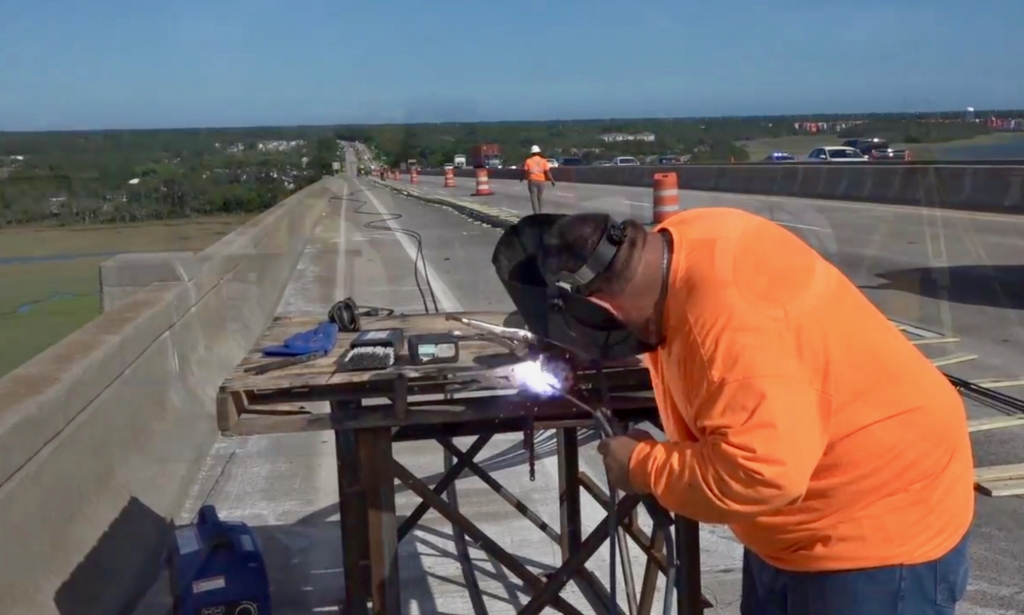 Until then, SCDOT officials are visually inspecting the cables via daily walk-throughs.  In August, an agency official told reporter Andrew Knapp of The (Charleston, S.C.) Post and Courier that no “new problem spots” had been detected during these walk-throughs.

Meanwhile, SCDOT is triaging its repair work on the bridges.

“Over the next several months and into next summer,” one SCDOT official told the paper, adding, “you’ll see us moving back and forth between the bridges and performing repairs in the order that they’re needed.”

Sloan is not impressed.  In an (unpublished) letter to the editor of the Post and Courier two weeks ago, he urged the paper to “robustly educate South Carolinians about the stability of the superstructure of this bridge and the (SCDOT)’s failure to voluntarily disclose that to South Carolinians.”

In his letter to the paper, Sloan reiterated his belief that “it is reasonable to expect that several of the remaining … external tendons will part prior to being replaced.”

In a follow-up letter to this news outlet, Sloan implored us to action – noting “there’s good reason to suspect that there might be a high risk to the safety of the traveling public here.”

“Neither (SCDOT) nor any other person has made any effort to study the safety issue and report its findings to the public,” Sloan wrote in his letter to our founding editor, Will Folks.  “I think (SCDOT) should have.”

While Sloan acknowledges he is not an engineer with access to detailed drawings of this bridge, he is by no means an amateur analyst.  A retired paving contractor, he has years of experience in the infrastructure industry – in addition to his years of experience dealing with secretive government bureaucracies.

Speaking of a lack of forthrightness, SCDOT is one of the many agencies of state government which refuses to provide responses to inquiries from this news outlet.  Additionally, one of its former employees threatened to sue this news outlet when we began reporting on the agency’s prior knowledge of problems with the Wando Bridge.

Such standoffishness in the face of legitimate public safety concerns is profoundly disappointing.

Our hope is this report will raise awareness of those concerns, and prompt other outlets to hold SCDOT accountable as its ongoing repairs of the Edwards bridge continue.