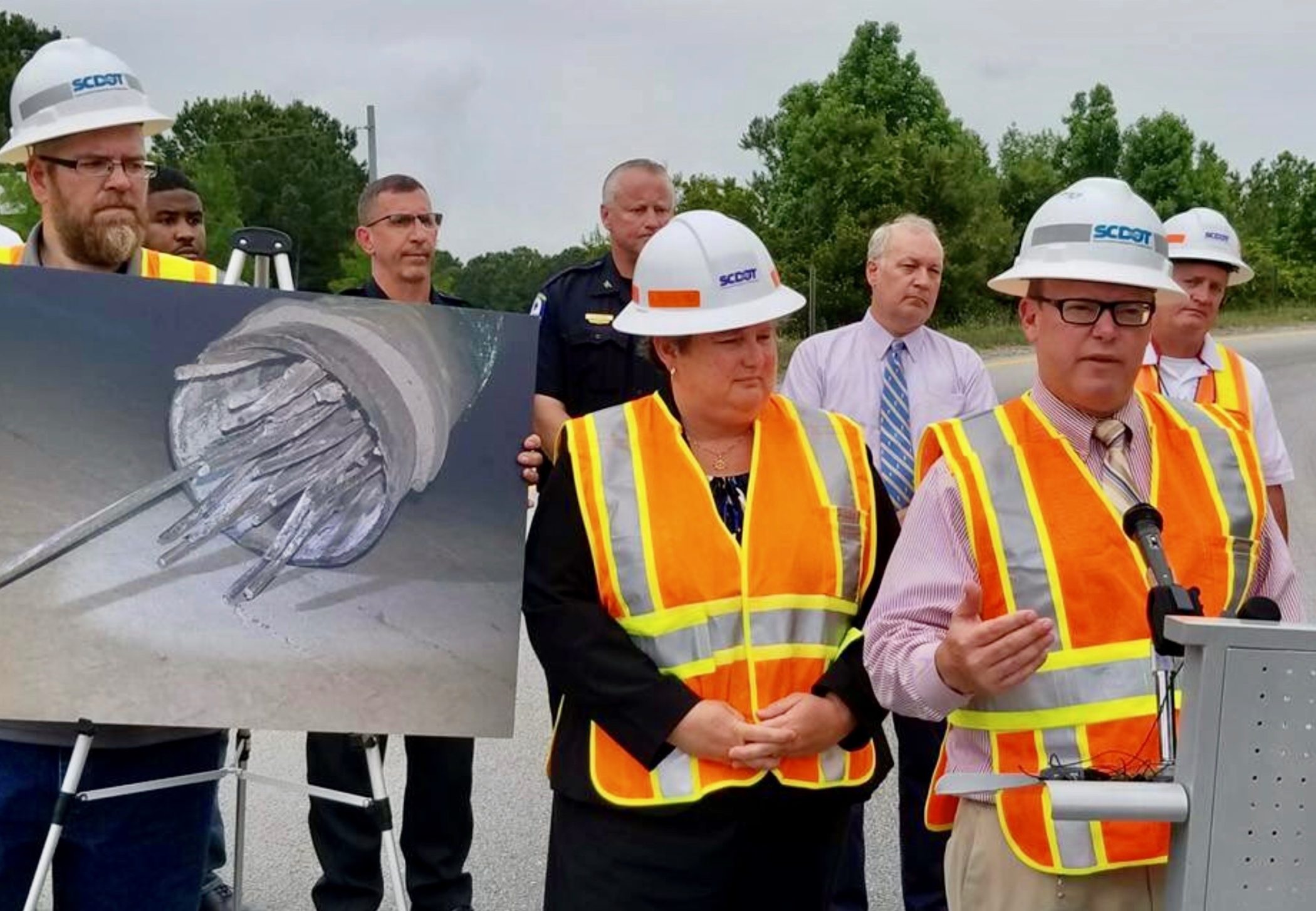 Earlier today, our news site published an exclusive report alleging that officials with the South Carolina Department of Transportation (SCDOT) knew about failing bridge cables on the James B. Edwards bridge near Charleston, S.C. as far back as October 2010.

Apparently, we need to rewind the clock further than that …

This news site has now obtained evidence suggesting that the cables – or “tendons” – on the Edwards bridge were a cause of concern for the agency as far back as 2002.

The Edwards bridge is actually a pair of segmented spans carrying Interstate 526 across the Wando River between Mount Pleasant, S.C. and Daniel Island, S.C.  This vital Lowcountry traffic artery – which carried tens of thousands of vehicles per day – has been shut down owing to concerns over its structural integrity.

The result?  #Trafficmaggedon – unprecedented gridlock in and around South Carolina’s largest metropolitan area.

According to our sources, this gridlock could last up to four months – maybe longer – as officials try to get a handle on the issue.  SCDOT officials say the bridge will be back up and running in four weeks, though.

As we noted in our original report earlier this week, we’re told the bridge’s cables have been weakened over time as a result of “corrosion due to salt air.”  One of the cables snapped in October 2016, prompting SCDOT to conduct more extensive monitoring of the bridge – and to limit traffic over the span.

This week another cable snapped, forcing the agency to close the bridge to westbound traffic.

Of interest?  The most recent cable to snap was reportedly not among those the agency was concerned about – a revelation that has raised serious concerns regarding the structural integrity of both bridges.

Anyway, in our most recent report we revealed the following information …

In the fall of 2010, SCDOT bridge maintenance engineer Lee Floyd is said to have briefed numerous employees at the agency regarding problems with the Edwards bridge.

We’ve been asked not to quote directly from briefing notes we were exclusively provided, but according to multiple sources familiar with the briefing – Floyd specifically warned his colleagues that the bridge’s tendons were rusting due to corrosion and that studies needed to be undertaken immediately to assess the severity of the damage.

Additionally, Floyd reportedly told his colleagues that the bridge’s designer – Figg and Muller (now Figg Bridge Group) – confirmed the issues to the agency.

We’re in the process of verifying additional details related to the fall 2010 briefing regarding the Edwards bridge, but the bottom line is clear: SCDOT knew there were serious problems with the tendons on this bridge eight years ago.

We reached out to Floyd for comment – prompting a response that was instructive on multiple levels.

“You need to get your facts straight,” Floyd told us angrily. “You need to retract your story.”

When we pressed Floyd to identify and explain any inaccuracies in our coverage, he revealed the real reason he was upset: A perception that he had provided this news site with the briefing notes.

According to Floyd, he received a call from SCDOT secretary Christy Hall inquiring as to our coverage.  Hall wanted to know who was leaking information to us – and Floyd emphatically (and accurately) denied it was him.

Floyd – who left the agency back in March – refused to provide us with further comment.

Floyd subsequently sent an email to our founding editor, Will Folks, demanding a retraction and an apology.

“You have until 12 noon tomorrow to retract (the) story and apologize for using my name,” Floyd wrote.

We stand by our reporting regarding the 2010 briefing.  And more importantly, so do our sources.

“I take damn good notes,” one of our agency whistleblowers noted. “A lot better than James Comey.”

In fact our whistleblower provided yet another document related to this debacle – a federal funding request which underscores the extent to which this bridge has been causing engineers headaches for decades.

We’re referring to a memo dated October 11, 2002 which requested $154,000 in federal funding related to a “innovative bridge research” project.

Specifically, the memo referenced “the installation of acoustical monitoring equipment” on the Edwards bridge, which was needed to “monitor the post-tensioning strands in the post-tensioned, precast concrete segmental box girder superstructure.”

“We believe that this monitoring system can provided an excellent means of inspecting the strands for breakage and help protect the integrity of the superstructure,” the funding request continued. 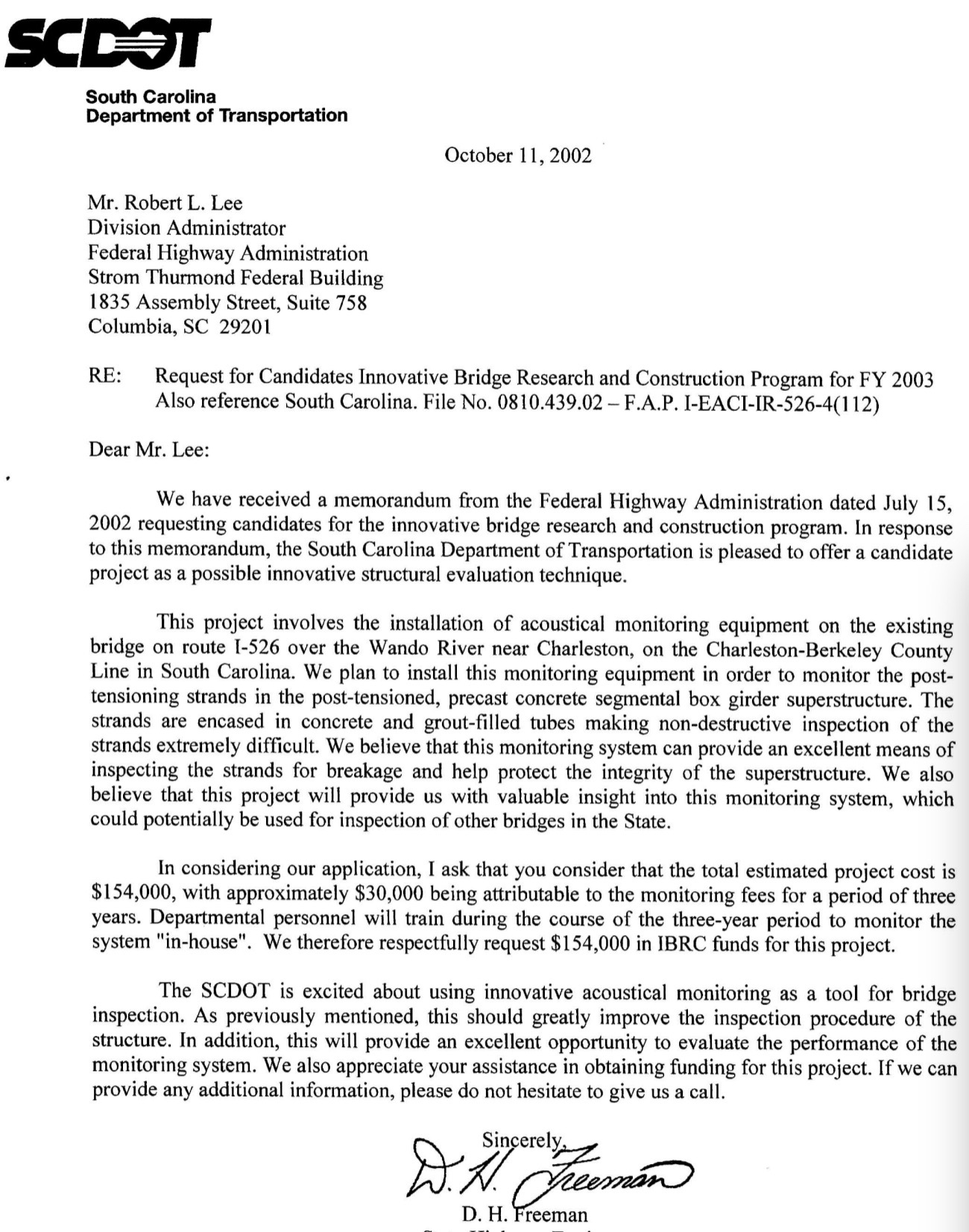 Need more?  An appendix to this funding request – prepared for SCDOT by a private provider – lamented the fact that there “has been no way to efficiently track the rate and location of breakage of these wires.”

“The lack of information … has restricted the options available to owners of structures where corrosion has been identified,” the appendix added.

Yeah … the operative words there being structures where corrosion has been identified.

The Edwards bridge was built with pre-cast concrete segments using top-down construction – enabling builders to lower their costs and reduce their environmental footprint.  In fact as we’ve previously noted, state leaders touted this cost-effectiveness – and environmental friendliness – when they opened the span back in 1991.

“Segmented bridge construction is very popular in Florida because the segments are cast on site,” one industry source explained to us. “Cuts down on the transportation costs and is self-contained.  Europe and China use it extensively.  You can set up an on-site ready-mix (concrete) plant and truck in your cement and sand aggregate.  Works well and doesn’t require a huge footprint.”

Within four years, though, the bridge began experiencing issues with aluminum joints positioned between its concrete spans.  Those problems did not threaten the spans’ integrity, but they did begin to prompt questions about the structure’s design.

Florida has been working for years to address issues with its segmented bridges.

In February of 2002 – six months before SCDOT made its funding request to the feds – the Florida Department of Transportation (FDOT) released a report entitled “New Directions for Florida Post-Tensioned Bridges.”

This report (.pdf) revealed numerous “incidences of post tensioning corrosion,” which according to the authors “have led to increased design awareness, strengthened construction specifications, improved procedures for maintenance, inspection and repairs.”