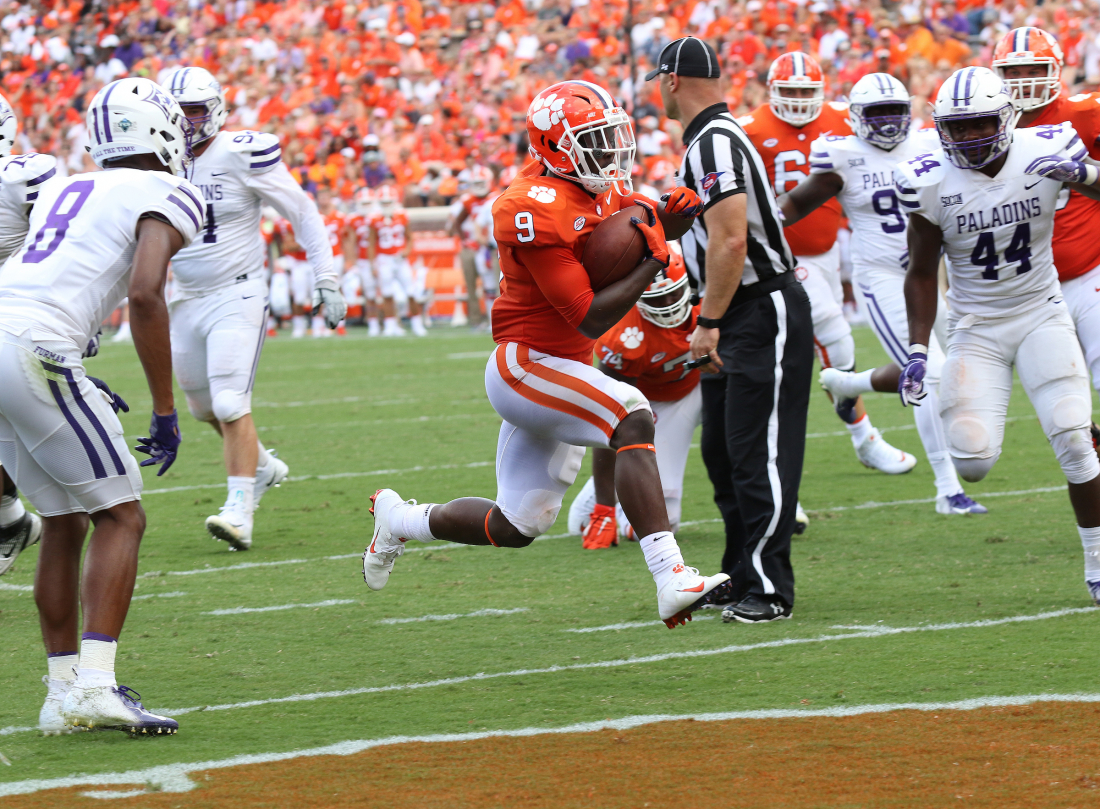 Clemson University’s second-ranked football team kicked off its 2018 season on Saturday with a 48-7 rout of Furman University – a Football Championship Subdivision (FCS) program that offered the perennial national powerhouse a chance to tune up for next week’s trip to College Station, Texas.

Oh, the Paladins (0-1, 0-0 Southern Conference) gave Clemson a chance to show off its newest weapon …

True freshman quarterback Trevor Lawrence made his collegiate debut for the Tigers (1-0, 0-0 ACC), completing nine of 15 passes (60 percent) for 137 yards and connecting for three touchdowns.  The former No. 1 national prospect entered the game on the Tigers’ fourth offensive series of the game after senior Kelly Bryant started the game and played the entire first quarter.

Clemson scored points on all five of Lawrence’s drives – something not lost on the announced crowd of 80,048.  The 6-foot-6, 215-pound native of Cartersville, Georgia (below) has been pressing Bryant throughout fall camp for the starting job – but the 2017 starter (who had the unenviable task of following Deshaun Watson a year ago) has managed to retain his role. 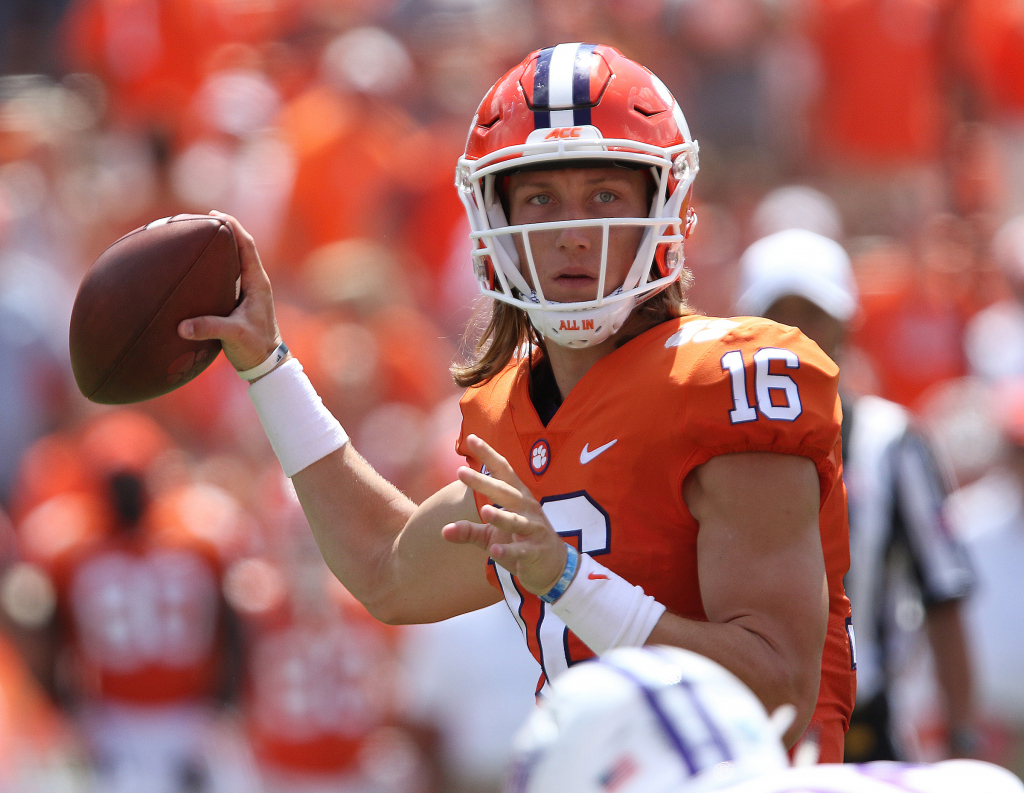 Bryant connected on ten of 16 passes (62.5 percent) for 127 yards and a touchdown against Furman.  He also ran five times for 44 yards and a score.  Also worth noting?  He was one of the first players to congratulate Lawrence on the latter’s first career touchdown pass – a six-yard throw to junior wideout Diondre Overton.

It is not immediately how Clemson will deploy its top two signal-callers over the course of the season – scripted or situational – but Tiger fans have to be thrilled with the flexibility they now have at this position.

“Both missed some throws,” head coach Dabo Swinney said after the game.  “Both made some great throws.”

Both will also see a much tougher opponent next weekend when they travel halfway across the country to take on the Texas A&M Aggies, who began their first season under new head coach Jimbo Fisher with a 59-7 rout of Northwestern State.

On the ground, Clemson was led by true freshman Lyn-J Dixon of Butler, Georgia.  The 5-foot-10, 180-pound speedster picked up 89 yards on six carries – including a 61-yard scamper late in the third quarter that set up Lawrence’s second touchdown pass.  Sophomore Travis Etienne – the team’s leading rushing a year ago – wasn’t far behind Dixon, rushing for 63 yards on 11 carries with one touchdown. 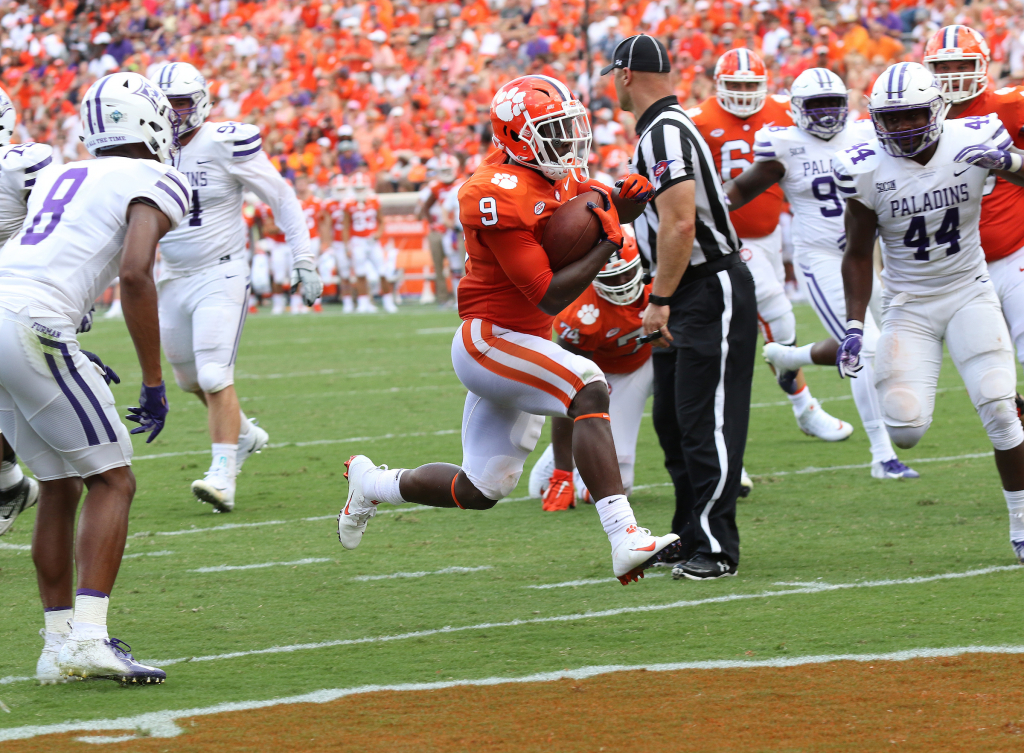 Defensively, Clemson displayed its usual dominance.  Buoyed by the return of multiple All-American performers, defensive coordinator Brent Venables’ unit held the Paladins to an anemic 163 total yards – more than two-thirds of which came on its last two drives against the Tigers’ back-up defensive players.

“Our guys up front from the onset really set the tone for the day,” Venables said after the game.

Asked whether he was disappointed that Clemson lost its shutout in the fourth quarter, Venables said “I don’t get too caught up in that I just look at how we’re playing.”

“I’d rather some guys get an opportunity to play than get a shutout,” he added. 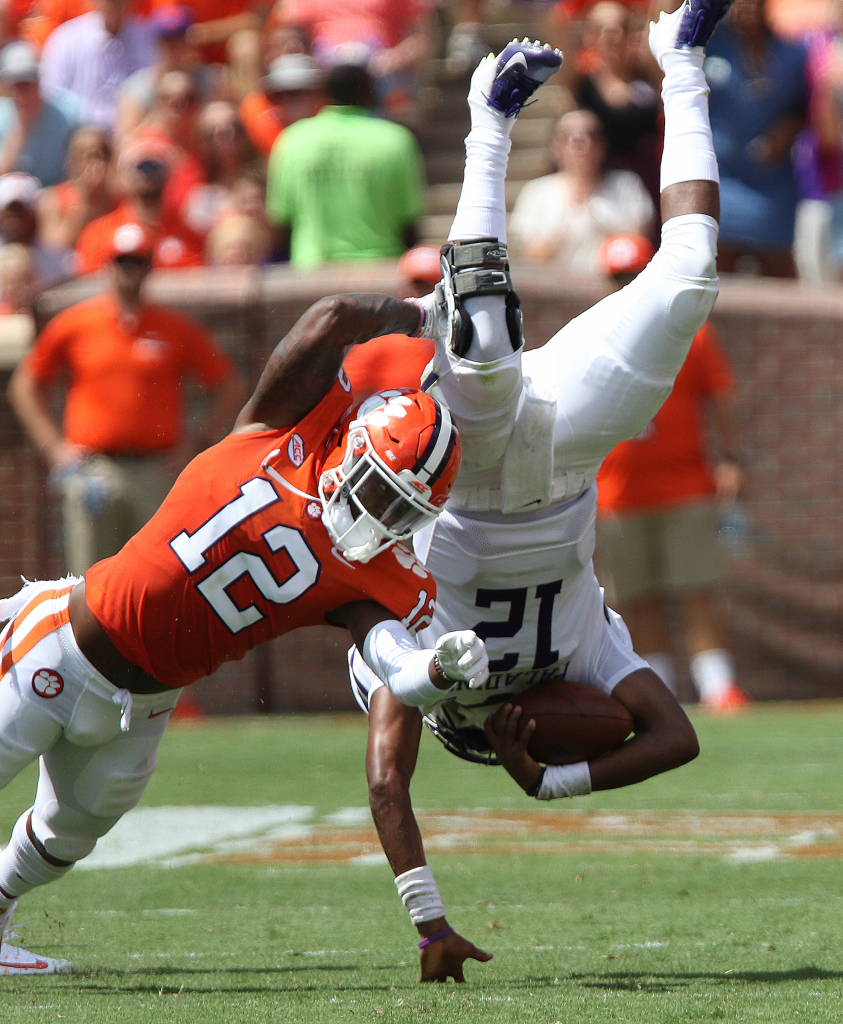 Clemson is gunning for a fourth consecutive trip to the College Football Playoff (CFP).  The Tigers lost the title game to Alabama after the 2015 season, then beat the Tide to capture their first championship in nearly four decades after the 2016 season.  Last season, Clemson lost to Alabama in the national semi-final round.

Alabama and Clemson are the early favorites to meet again in the CFP this season … which would further cement this as college football’s top rivalry of the new millennium.

Got something you’d like to say in response to one of our stories? Please feel free to submit your own guest column or letter to the editor via-email HERE. Got a tip for us? CLICK HERE. Got a technical question or a glitch to report? CLICK HERE. Want to support what we’re doing? SUBSCRIBE HERE.
Banner: Josh Byrum/ Sideline Carolina