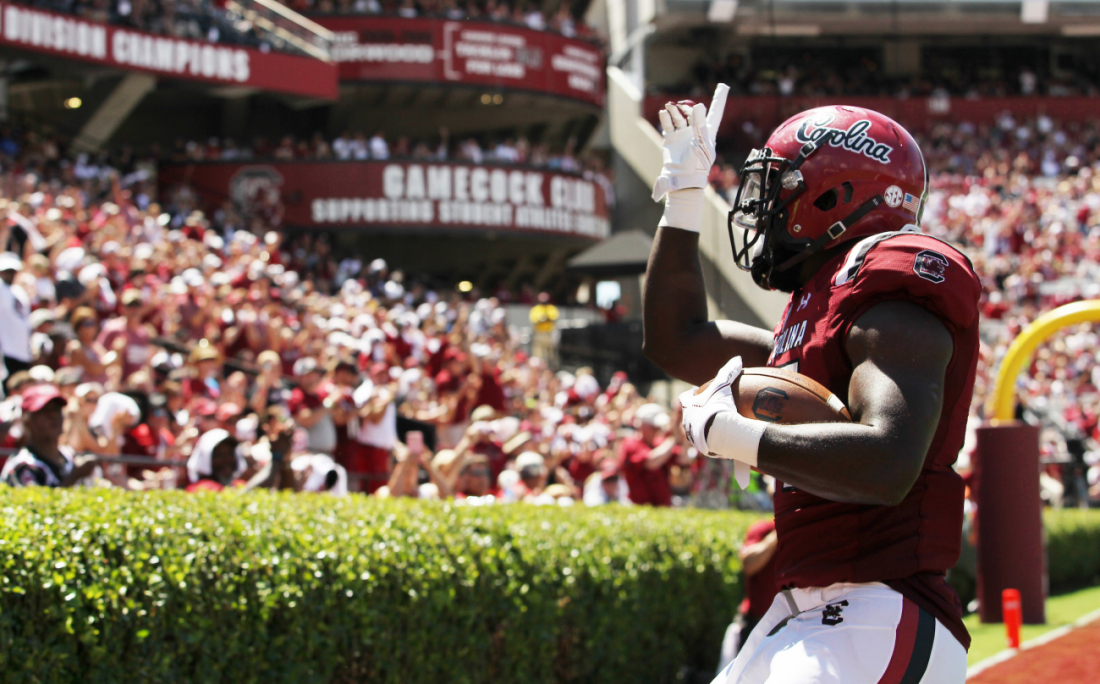 The University of South Carolina football team opened its 2018 season with an emphatic victory over Coastal Carolina, rolling past the Chanticleers of the Sun Belt Conference 49-15 on a blazing hot Saturday afternoon in Columbia, S.C.

With temperatures hovering in the mid-90s, head coach Will Muschamp’s Gamecocks (1-0, 0-0 SEC) unveiled a new look, up-tempo offense that amassed its highest point total since the former Florida front man took the reins of this foundering program following the 2015 season.

Cock-n-fire?  Judging by the overworked pyrotechnic operator (who launches fireworks skyward after every Gamecock touchdown), it certainly seemed so.

Unfortunately, most of the announced crowd of 75,126 missed the show (in person, anyway) – with thousands of them heading below the stands to cool off as the sun beat down mercilessly on a cloudless, early September day.  Several fans suffering from heat exhaustion had to be carted out of the stands by emergency responders.

By halftime, more than half of the stadium had emptied out.

South Carolina’s offense was unfazed – by the heat, the empty seats and certainly not by the Chanticleers’ defense, although their true “first test” will come next Saturday when the No. 3 Georgia Bulldogs roll into Williams-Brice Stadium riding a three-game winning streak in this SEC East bellwether series.

So far, though … so good.  And even better?  It didn’t look like they had to dig too deep into the playbook to do it.

In his first game under the new system, junior quarterback Jake Bentley (below) completed 22 of 29 passes (75.8 percent) for 250 yards and four touchdowns.  He threw no interceptions. 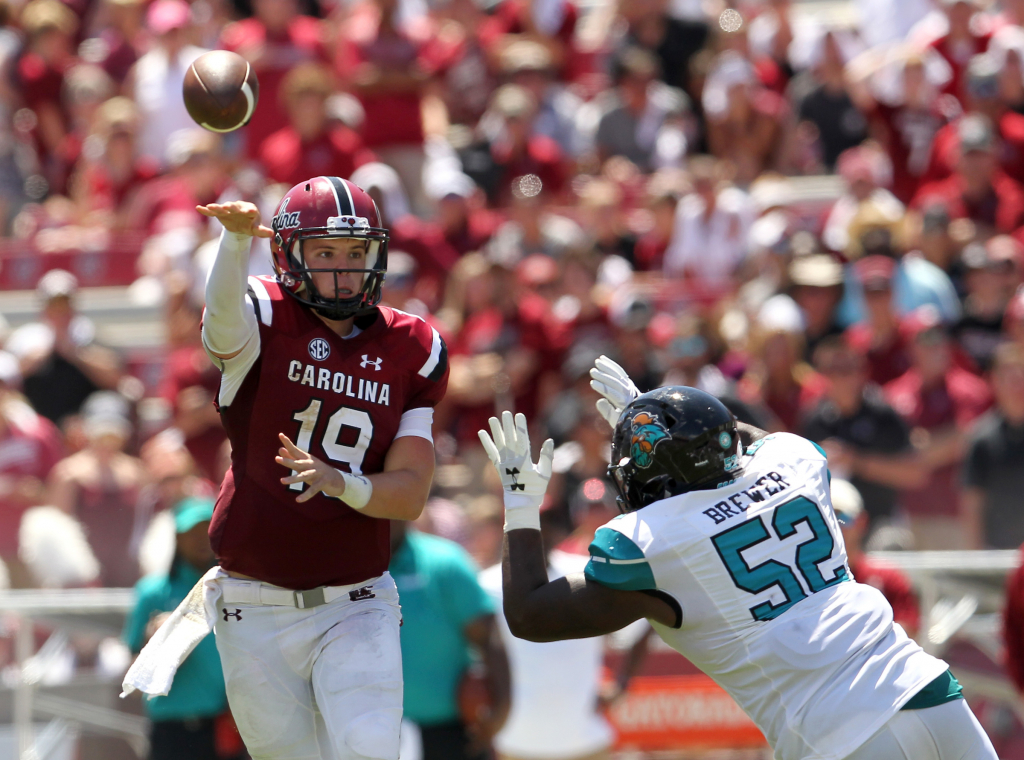 With the win, the 6-foot-4, 224-pound native of Opelika, Alabama moved to 14-7 as the Gamecocks’ starting quarterback.

Bentley’s top target?  From a yardage standpoint, it was sophomore Shi Smith.  The 5-foot-11, 187-pound Union, S.C. native caught four passes for 61 yards.  From a receptions standpoint, it was senior Deebo Samuel – the electrifying special teams All-American who missed the final ten games of 2017 with a broken ankle.  Samuel caught seven passes for 56 yards in his highly anticipated return to action – including an incredible one-handed grab in the corner of the south end zone for the Gamecocks’ sixth touchdown of the day.

It feels good to see @Uno_Captain back in action! pic.twitter.com/4vgpkqOR1J

“The guy had my right arm,” Samuel said after the game. “I had no choice but to put one hand up and try to catch it.”

In addition to his catches, Samuel had one rushing attempt for 11 yards and returned a pair of kicks for a total of 45 yards.  The 6-foot-0, 210-pound speedster from Inman, S.C. would have had an even better day statistically had Bentley not overthrown him on a wide open deep route during the second quarter – one of the few mistakes the offense made on the afternoon.

Backup quarterback Michael Scarneccia also got in on the action in the season-opener, lobbing his first career touchdown pass in the fourth quarter to sophomore wide receiver Randecrous Davis.  Scarneccia –  a 6-foot-3, 216-pound senior from Fleming Island, Florida – completed three of six passes for 44 yards in relief of Bentley.

In addition to receiving steady play under center, offensive coordinator Bryan McClendon got solid production on the ground in his second game at the helm of the South Carolina offense.  A stable of running backs accounted for 263 yards – led by junior Rico Dowdle, who missed the entire second half of the 2017 season with a broken leg.  Dowdle rumbled for 105 yards on fifteen carries including a touchdown.  Behind him, junior Ty’Son Williams ran for 82 yards on 11 carries with a touchdown.

In addition to his fourth career 100-yard rushing game, Dowdle (below) also caught a 22-yard touchdown pass from Bentley with just fourteen seconds left in the first half to put the Gamecocks up 28-3.

All told, the offense racked up 557 yards – its second-highest total under Muschamp. 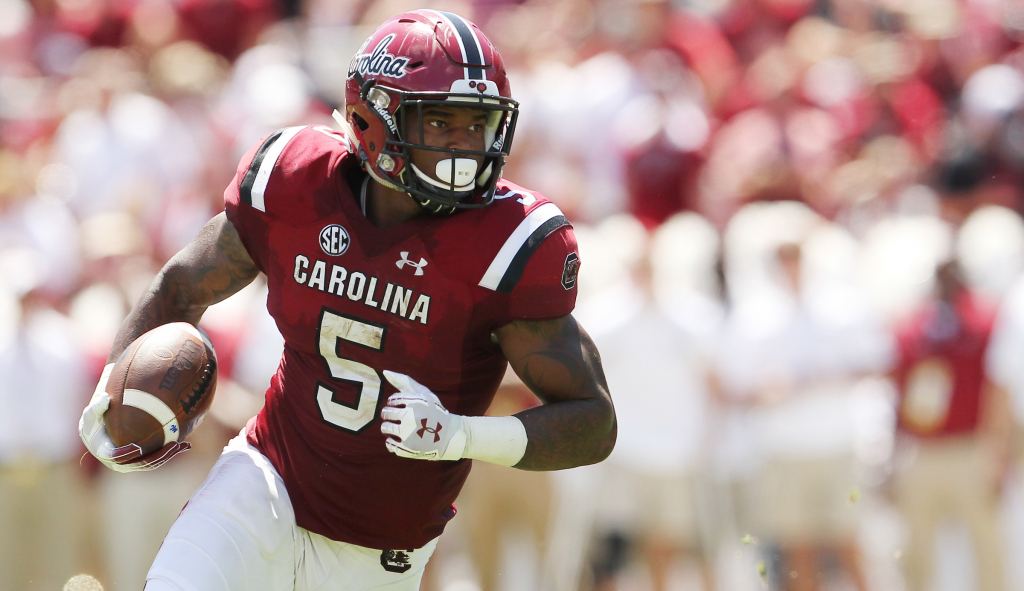 The South Carolina defense also turned in one of its best efforts of the Muschamp era although once again, there will be a marked uptick in competitiveness next week when Georgia quarterback Jake Fromm lines up on the other side of the ball.

Against the overmatched Chanticleers, though, Travaris Robinson’s surrendered only 238 yards – the second-lowest total of the Muschamp era.

The defense did sustain a scare in the third quarter when junior defensive end D.J. Wonnum – the team’s 2017 leader in tackles for loss and sacks – went down with an ankle injury.  Wonnum had to be helped off of the field and was unable to put weight on his left leg, but early indications are he suffered a sprain and will be able to play next week against Georgia. 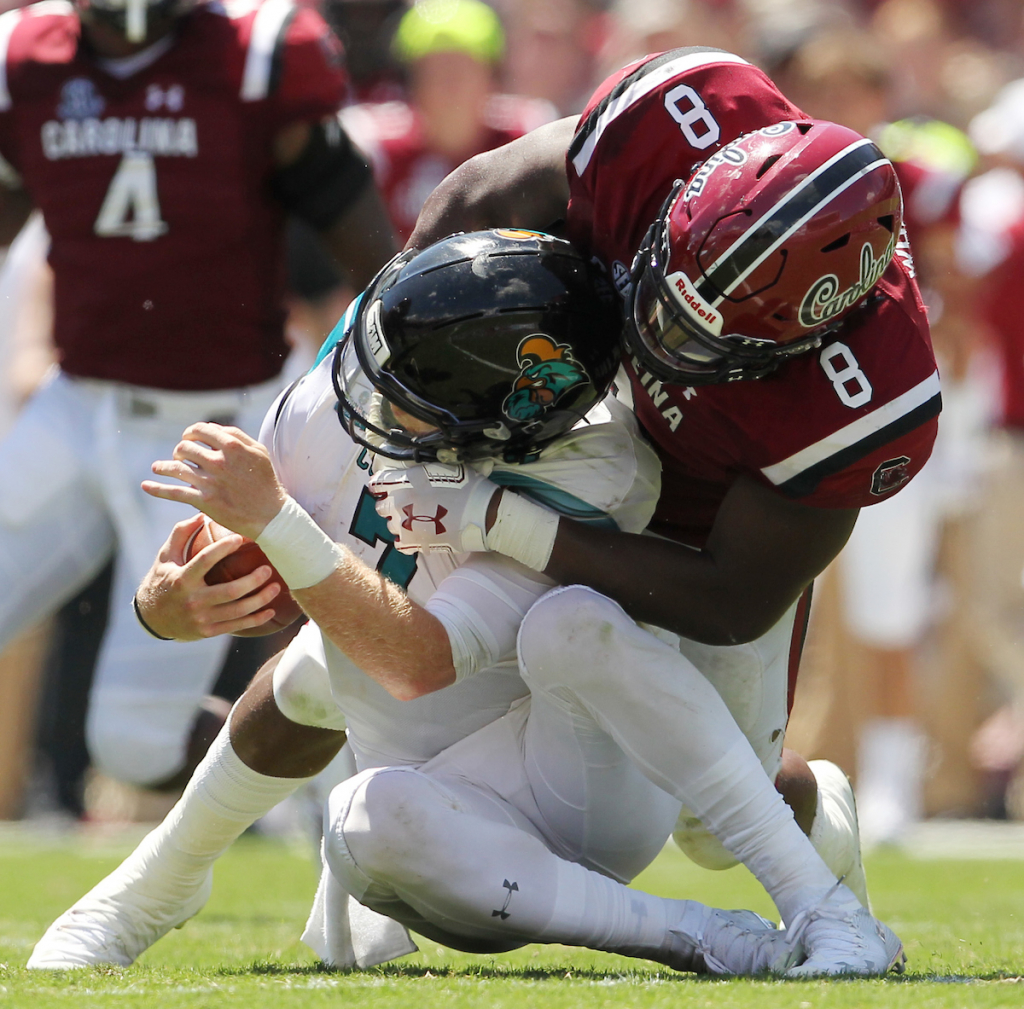 Prior to exiting the game with an injury, Wonnum (above) recorded three tackles – including one for a loss.  Senior linebacker Bryson Allen-Williams – another Gamecock who missed ten games last year due to injury – registered a sack and three tackles for loss in his return to the field.

“We were very efficient offensively, obviously, when you’re able to stay balanced like that,” Muschamp said after the game. “Defensively, we didn’t give up anything big, except for some silly penalties we need to get cleaned up.”

South Carolina was hit with nine penalties for 99 yards – including a controversial targeting foul against senior defensive back Nick Harvey that will result in him missing the first half of the game against Georgia.

NBA Superstar Out For Season (Again)