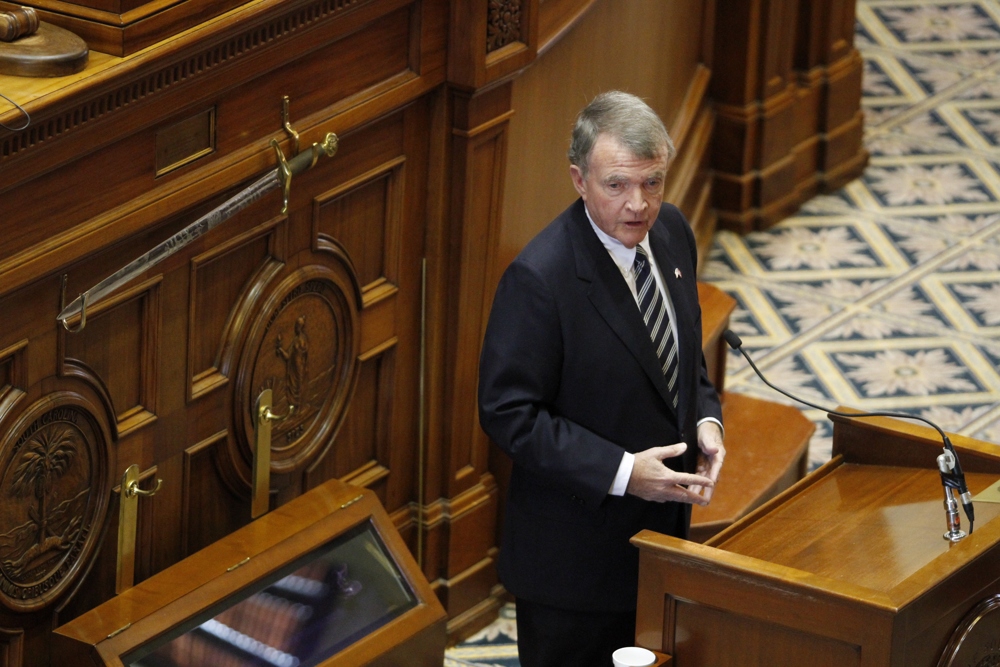 South Carolina state senator John Courson agreed on Monday to take a plea deal in connection with his role in the ongoing #ProbeGate investigation into corruption in state government, news which broke exclusively on this site.

The plea agreement – which calls on him to resign his office – was reportedly hammered out by S.C. first circuit solicitor David Pascoe and Courson’s attorney, Rose Mary Parham, just as the veteran politician was set to stand trail in a Richland County, S.C. courtroom on numerous charges.

In fact, the start of what would have been Courson’s trial – scheduled to begin at 9:00 a.m. EDT – was delayed by more than two hours as attorneys reportedly finalized the terms of the agreement (and waited for S.C. circuit court judge Carmen Mullen to sign off on it).

Courson pleaded guilty to one count of misconduct in office.  In addition to resigning his seat in the Senate – where he served for more than three decades – he also agreed to cooperate with Pascoe as the investigation moves forward.

Mullen’s approval of the deal wasn’t automatic given the animosity that has existed between her and the special prosecutor in recent months.  Mullen and Pascoe have sparred heatedly and repeatedly over previous plea agreements – each challenging the other’s interpretation of the law and, at times, each other’s integrity.

Mullen accepted this deal, though.

Courson, 73, was originally scheduled to go to trial in March but the proceedings were delayed.

Courson was facing an ethics charge for allegedly converting campaign funds to personal use as well as a criminal conspiracy charge and three misconduct in office charges.  The first three indictments against him were filed last March, while two additional indictments were filed last October.

He was facing up to sixteen years behind bars, if convicted …

The fiscally liberal “Republican” was suspended from office a year ago in the aftermath of the first round of charges being filed against him.  According to the initial round of indictments, he routed nearly a quarter of a million dollars through his campaign account to a company run by his political consultant, Richard Quinn.  Roughly half of that money was then allegedly funneled back to Courson via “multiple transactions” totaling more than $130,000.

Courson has vigorously protested his innocence for months – vowing to fight the allegations.  Of course he never offered anything resembling an explanation for the incriminating financial records first presented by Pascoe last March.

Pascoe said in open court that Courson and Quinn had an “agreement” that campaign funds would flow through the business before a percentage of the money was returned to him.

A local insurance agent, Courson had represented S.C. Senate District 20 (map) since 1985.  From 2012 to 2014 he was president of the State Senate, a job he relinquished so as to avoid having to become lieutenant governor.

His resignation sets up a special election for that seat – one of the few “swing districts” in the state.

Debra Russell: Standing Up To The Smear Machine