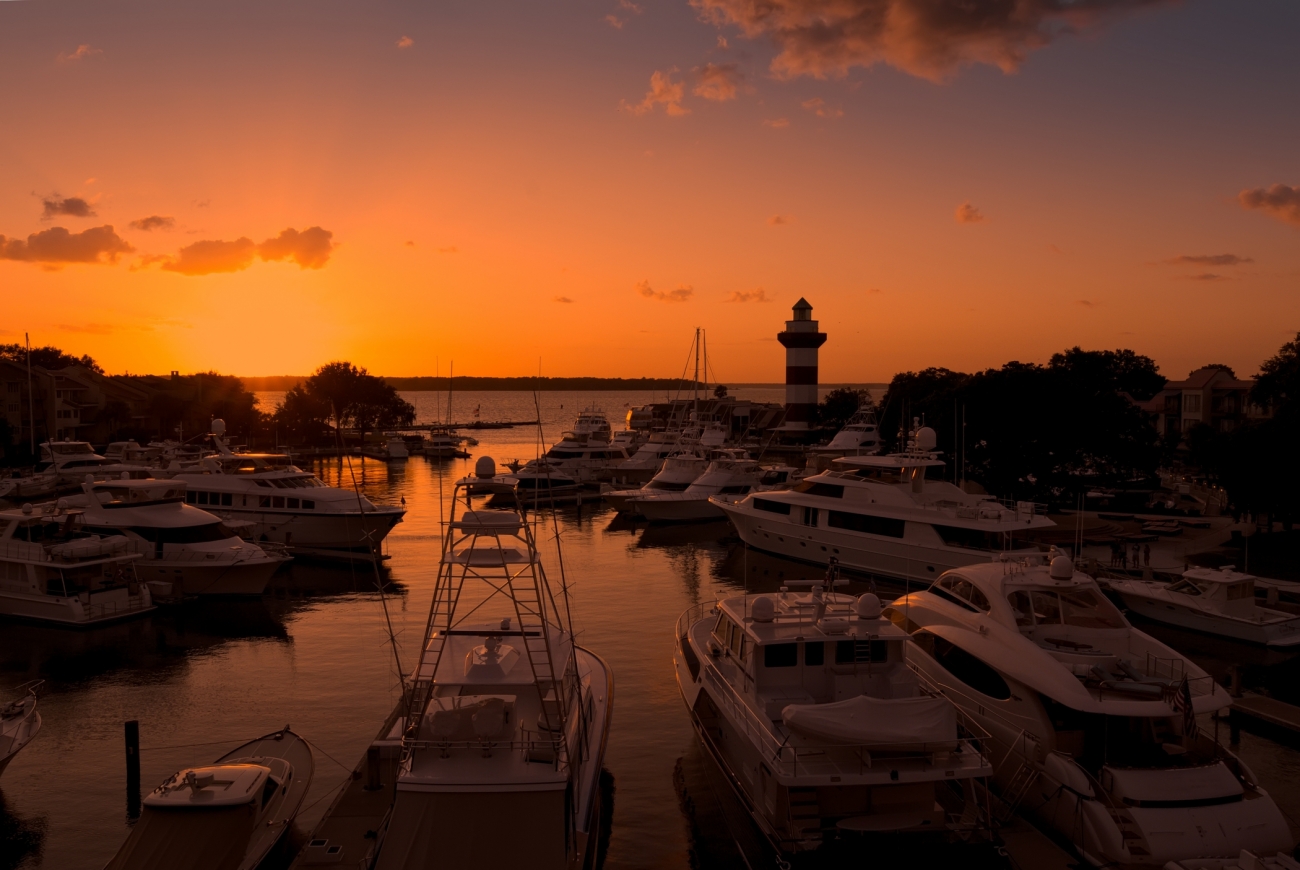 by AMY FEINSTEIN || Two years ago, if I had told you that all of the wisdom on Bravo TV’s Southern Charm was going to come from Kathryn Dennis, you would have said that I had fully embraced the Cheech and Chong lifestyle.  But I think at least some of you are now seeing my point – assuming you survived the latest episode without a panic attack.

I, for one, think Kathryn deserves to dance around in all of her redheaded glory yelling “I told you so!” And “who’s the crazy one, now?”

When we last left the road company of Lord Of The Flies, Thomas Ravenel checked in with his fight-or-flight impulses and opted for flight – literally opting to hide behind the two youngest guys in the group.  Ravenel clearly hopes Austen Kroll and Craig Conover can protect him from Ashley Jacobs – a.k.a. “Plan B” – the Bobble-headed Banshee gaining steam at a boîte in Daufuskie Island.  Yes, Thomas, you brought her here, so deal with it, even if it means that you have to wrap a tranquilizer in cheese and throw it to her.

But no, Thomas now looks like a full-fledged AARP member, and not the BMOC that smiles back at him from the hallway mirror.  The Sage of Moncks Corner is now steering the ship, backed up by perhaps the best educated Spice Girls ever – all trying to contain the crazy that looks more like a bad reaction to an anti-psychotic.  Are the head movements and the hair-flipping a tic?  Or is this some kind of California Fly Girl posturing they don’t teach on the east coast?  Farrah Fawcett from her Charlie’s Angels days?

It’s unclear what Ravenel learned at The Citadel, but let’s say in strategy class, he must have opted for the CliffsNotes.

Just an aside from someone who is an ex-wife with kids, as well as a step-mom (and a Celtic redhead, which will become relevant later) YOU DO NOT TALK ABOUT ANOTHER WOMAN’S CHILDREN IN ANGER!

I know you think you have all the wisdom of a Southern California girl with a community college education, but NOBODY ASKED YOU!

If I could freeze this scene, I’d ask Chelsea Meissner to channel her best M’Lynn from Steel Magnolias in the scene where Shelby goes into diabetic shock. Grab some vodka or tequila and pour it down Plan B’s throat. “Drink the juice, Shelby, Drink the JUICE!”

Truly, if all else fails, something tells me Plan B has a ball gag in that purse she’s clutching …

We don’t see them, but we hear Austen and Craig – challenging their best Bill and Ted as they have a less-than-Excellent Adventure.

Austen keeps walking across the scene with larger pieces of wood, building up the fire just in case Kathryn decides to kill Plan B and a Viking funeral is in order.

Meanwhile, why do I keep hoping Shep Rose decides to pull off the best prep school lax tackle of his life and take Plan B down? But alas, his mama seems to have raised him right – and (unlike Ravenel) it seems he won’t fight out of his weight class.

Next we see Whitney Sudler-Smith, digging deep, trying to figure out what you are supposed to do in such a situation.  Mix a cocktail?  No.  Offer someone a hot beverage?  No.  Break glass is case of emergency?  Yeah, we might be approaching that point, but giving these women weapons sounds like a bad, bad, idea – especially after Plan B decided that threatening the six foot angry mama bear in s**t kicking boots was a good idea.

“You better watch yourself!” 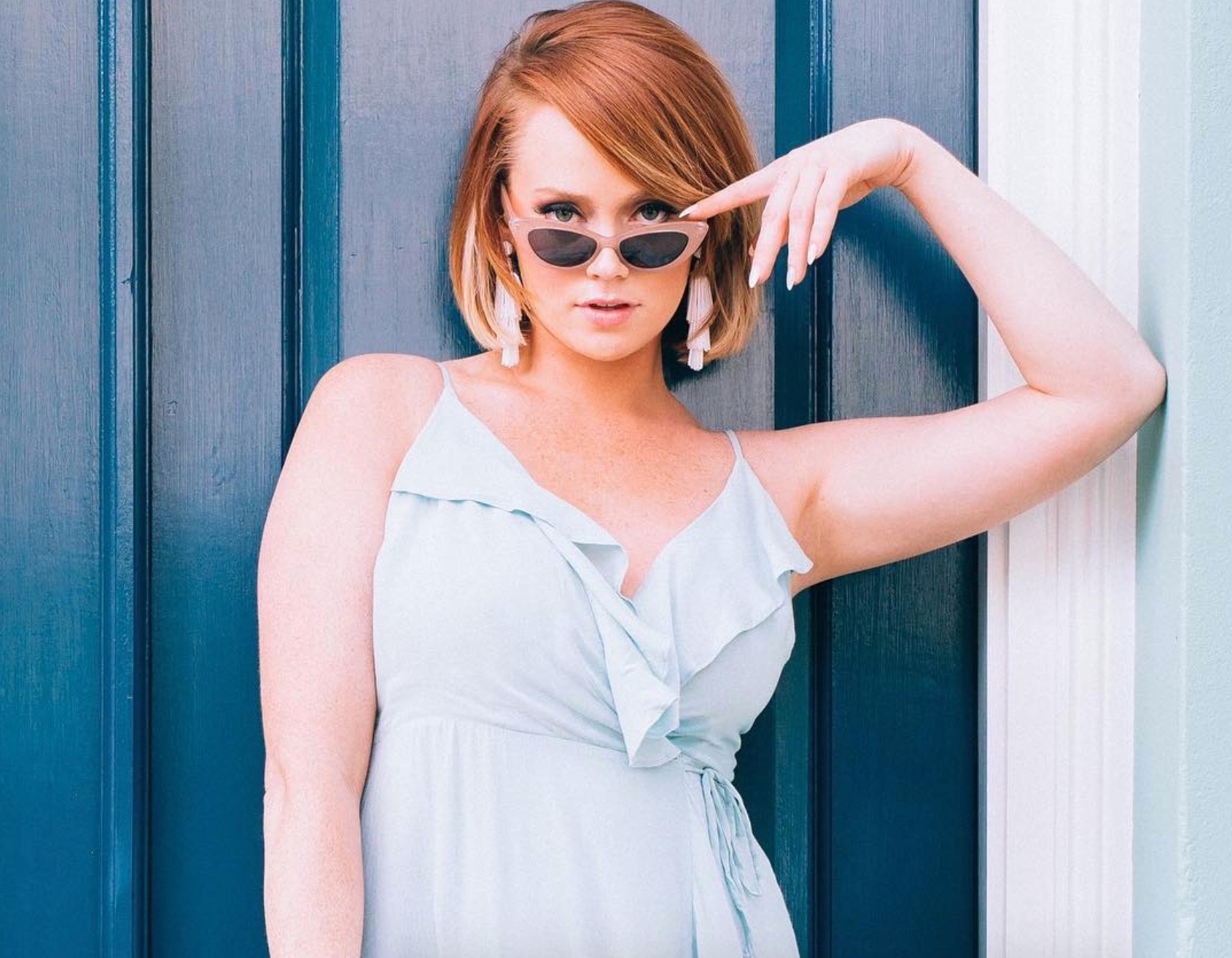 I admire Kathryn’s restraint like I can’t even tell you, but something about Plan B takes me back to my field hockey days, and I’m a right wing with a wooden stick, and someone has just high-sticked at my goal keeper.  Suddenly, I am William Wallace, charging into battle in a polo shirt and plaid kilt.

But I digress. Did you, Pretty Woman just says “I just don’t respect you?”

Okay, Thomas is approaching, and maybe he’ll grab his gal with a butterfly net.  The hospital where Scott put Zelda away can’t be too far away.  But no, Ravenel turns into everyone’s favorite waiter at a strip mall Ruth’s Chris Steak House.

“Are we ready for a nice meal?”

Next, Plan B invokes the name of the Nanny.  Really, doll, you want to talk nannies?  Are you talking about the one who filed the police report, or the one that was the gas-lighting side kick with the teen daughter?  IX-Nay on the Anny-Nay!

If you learned anything from the nanny, Plan B, it’s that you are not supposed to play with your hair at the dinner table!

The word of the day is IM*PO*TENCE.  Not in the familiar, I need to refill my Cialis kind of way, but in the manner that means lack of action.  At this point, Thomas, even Whitney is telling you to do something!  Anything!

Plan B needs a rebooting.  When my MacBook spits and sputters, you hold down buttons and push power, but if all else fails, you smack the keyboard. 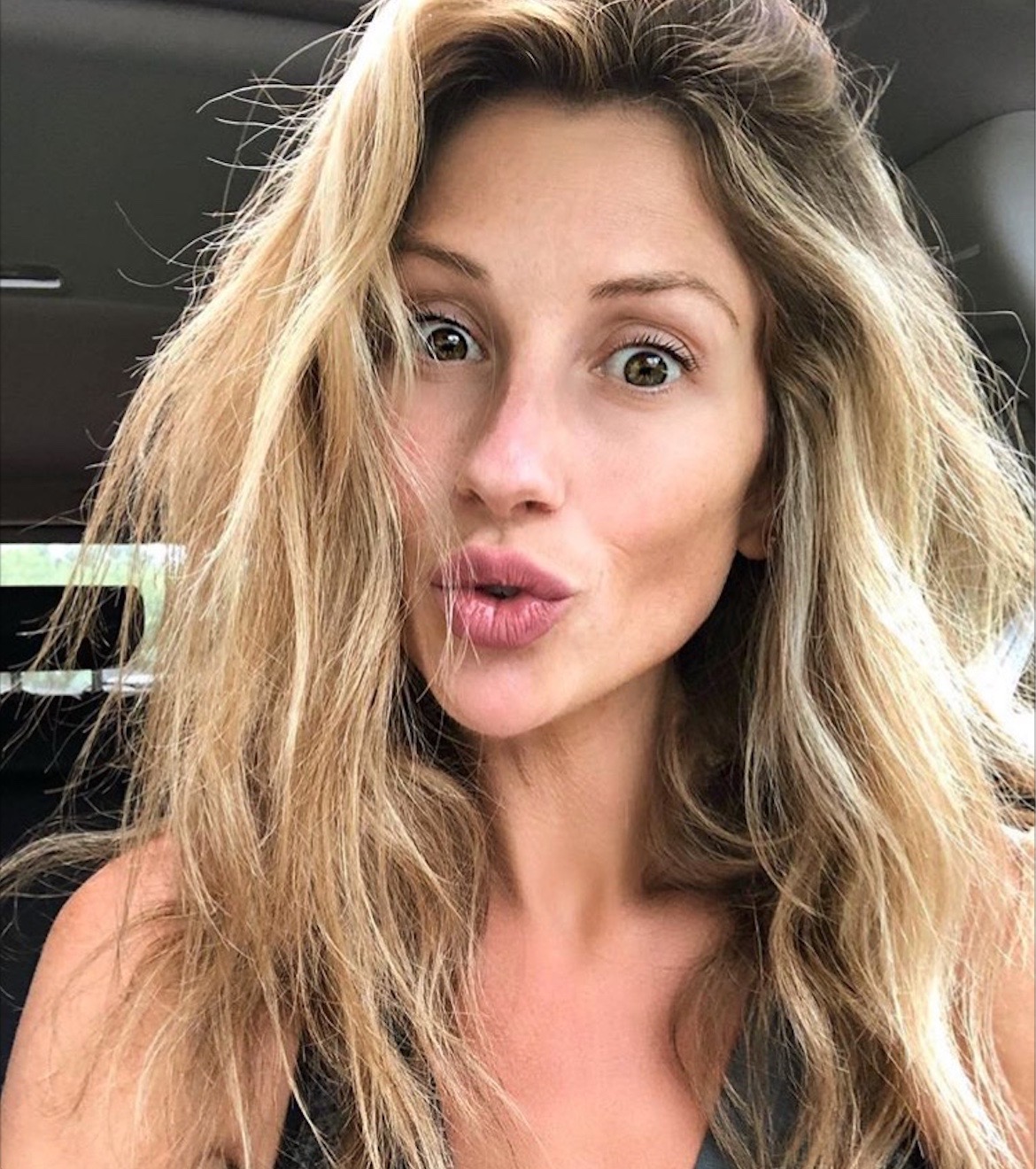 Suddenly, Thomas is concerned about being respectful of women? What? Since when?

I do love it when KD goes full country. Dayummmm!

Girl, we are all traumatized by the nanny stories, let me tell you!

In a universe turned upside down, Whitney praises Kathryn for not gutting Plan B like a fish on the dock.

The Sage of Moncks Corner then drops some more knowledge, thanking the Spice Girls and Whitney for having her back.  KD, you might not be able to hear all of us at home, but we’ve got you too!

Thomas is trying to reboot Plan B, but he might need to dial up Apple Care.

Ummm … where is the defibrillator when you need one?

Some foreshadowing: Shep might be the guy who ultimately might decide to throw Plan B off the ferry. He’s our best chance.  He’s a local boy, he knows the current pattern.  C’mon Naomie Olindo, block for him, it will only take a minute!

Everyone is on the ferry now, and once again we have the setting for an Agatha Christie mystery.  Only this time, it’s Thomas who seems to have too much or too little medication.  Chelsea, now you see what Kathryn has been trying to manage for years.

Surely this ferry has to have a defibrillator, right?

The Sage of Moncks Corner is now going to school everyone on a little-known psychiatric diagnosis called folie à deux.  It explains two people sharing the same delusion, and it is exactly the problem with the newly formed group-think called TRAshley.  Hopefully the Zelda Fitzgerald suite is a double.

Walking back into the house, Kathryn looks like she needs an ice pack and a vat of lavender oil. Maybe some yoga nidra.

“She’s half Italian. I don’t want to sound racist, but…”

Generally, when you preface something with “I don’t want to sound racist,” you need to stop there. Read the room, or at least read the face of the Sage of Moncks Corner, who in her twenties is telling you everything you need to know about getting along with non-WASPS!

“You know, they move around their hands a lot, they are real passionate people.”

My third grade teacher used to complain I had diarrhea of the mouth. I’m starting to understand what she meant.

But let’s take it one step further. If being Italian is a get out of jail free card for being, we’ll just call it “passionate,” why isn’t being a Celt like KD (be it, Scottish, Irish, Welsh, or Breton) an excuse for kicking up the occasional bar fight?  C’mon, if we are using “Ravenel logic.”

After all that, everybody needs a break … and so into the water we go, seeking the healing powers of the elements.  A little fishing, a little crabbing – the hunter-gatherers are killing some dinner while T-Rex gets a pedicure from the Dragon Lady. 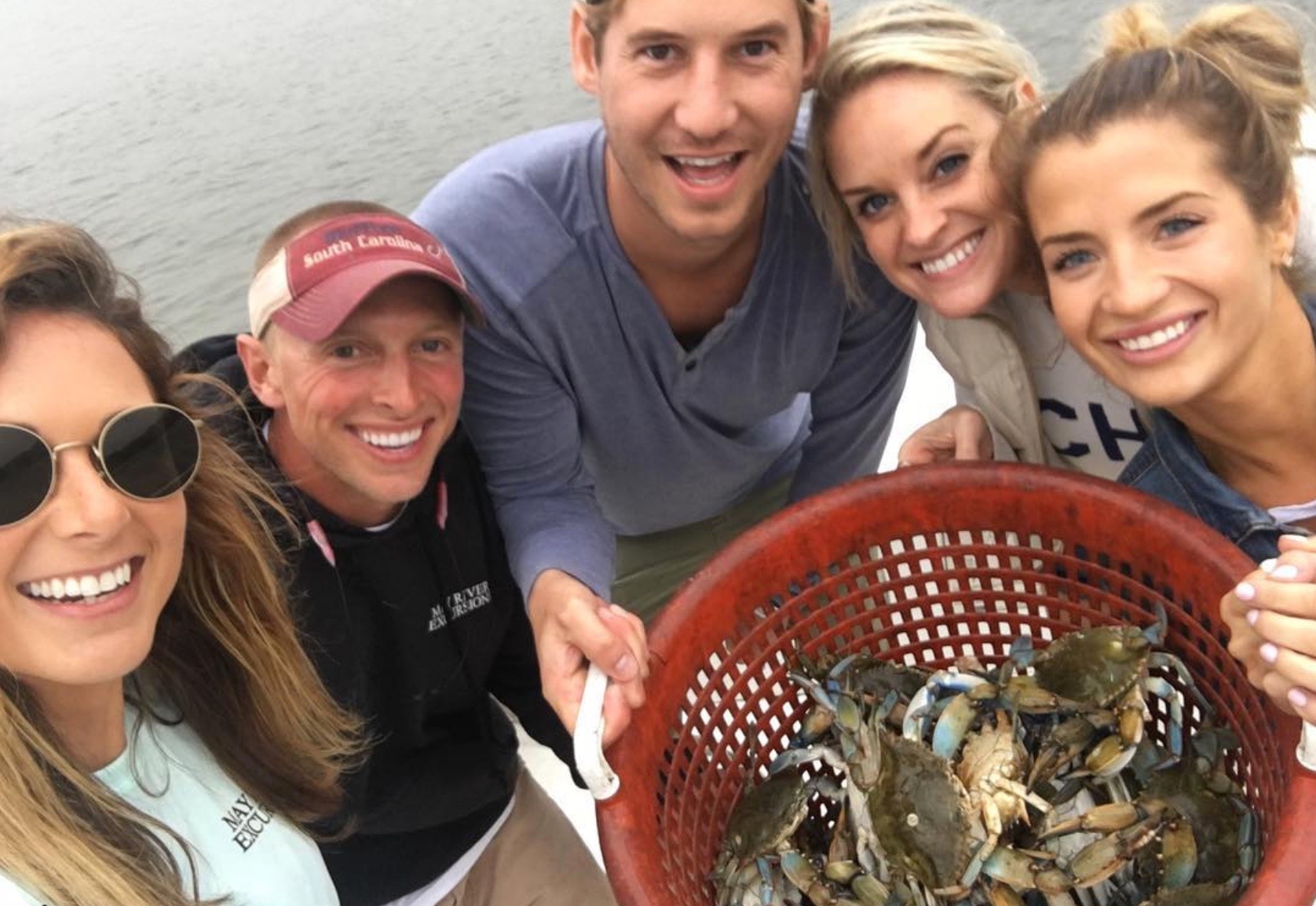 But honey, just in case you didn’t realize that you are everyone’s Plan B, the dinner bell or lack of a chair is your wake-up call, because girl, “Ya Basic!”

You have gotten to the point where even Shep is thinking about suffocating you in your sleep after Foghorn Leghorn passes out from one too many redheads, errr, drinks.

I also realized in this episode that at the core, Whitney is my spirit animal.  Back in the day, I liked to mix it up, but now, I just like to close the door and hide from the crazy people with my phone and my iPad.

After the apps were served, I praise Naomie for not vomiting when Plan B asks Thomas to feed her. Where is that pocket square/ hanky when you need it, am I right?

Shep finally decides he needs to tap out, saying he is done with Plan B.  As Shep tries to run from the table where the two are sitting alone, Thomas can’t seem to close his mouth, as if he’s in mid-guffaw.

Plan B tells Shep to get her a shot of tequila (because nothing puts out a crazy fire like tequila).

“Can you get me a chilled shot?”

Is it me, or is Shep mentally counting to ten, trying not to pour the Cuervo over TRashley’s head or bonk her with the bottle.

To round out the evening, Shep finally says what we are all thinking.

“[Plan B] you are stealing my oxygen!”

“The Interview” Was Stupid