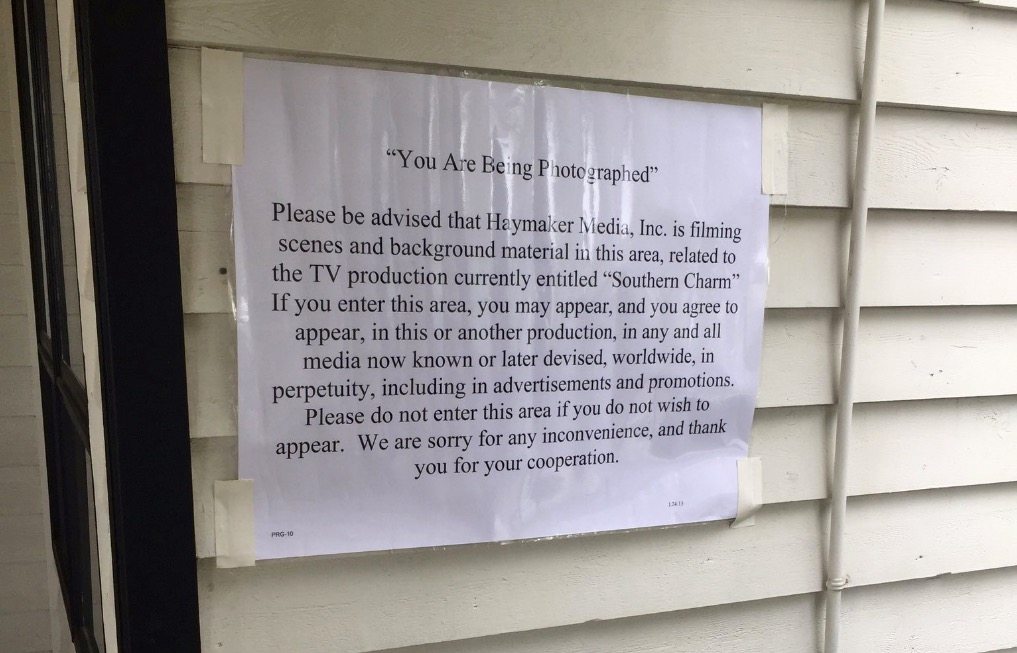 Last week this website refuted the buzz that Bravo TV’s Southern Charm reality television show would not be back for a fourth season.

Well we didn’t refute it … series co-star Thomas Ravenel did, in a hilarious voicemail message to a woman he was trying to recruit as his new personal trainer.

Anyway … if there were any doubts as to whether Southern Charm is back, we can now put them to rest …

That’s a blanket disclaimer from Southern Charm’s production company placed on the doorway of Tavern and Table, a restaurant located on Shem Creek in Mount Pleasant, S.C. (right across the Cooper River from downtown Charleston).

Frankly, the fact that the show is coming back for a fourth season should surprise absolutely no one. After all, the oft-toxic relationship between the 54-year-old Ravenel and his 25-year-old redheaded co-star/ baby momma Kathryn Dennis has been ratings gold for Bravo.

In fact we suspect the show’s new episodes will focus more tightly on Ravenel and Dennis, who have been embroiled in a bitter custody case this year. Dennis also spent a month in a rehab facility in California earlier this summer – news of which broke exclusively on this website.

For example, we reported exclusively last July that Southern Charm would be renewed for a third season. We were also the first website to report on the rumors surrounding Dennis’ second pregnancy.

Long before that, we were the first website to report on the show’s existence, and our founding editor Will Folks – who is alternately credited/ blamed for introducing Ravenel and Dennis had a cameo on Southern Charm’s series premiere in the spring of 2014.