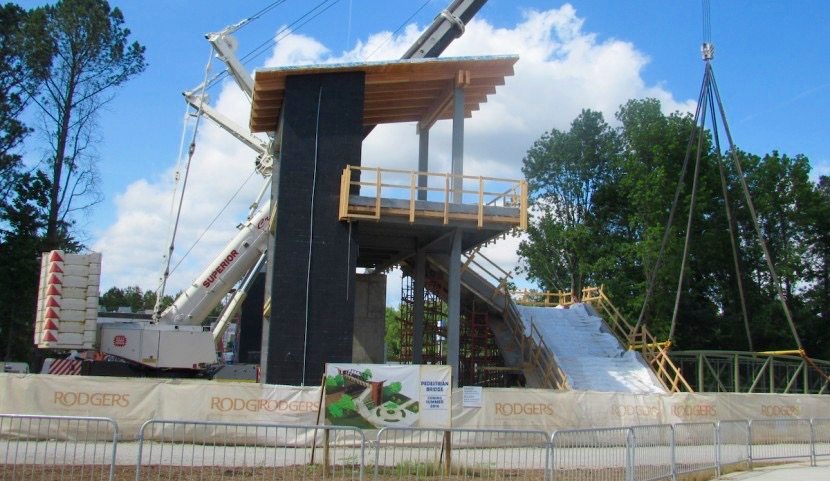 This is the $1.2 billion levy that was suppose to fix roads and bridges in the county – although the tax is perhaps most famous for the rigged election in which it was “passed” by voters.

Beyond all of the corruption that’s been exposed, we’ve also focused on how this money isn’t going to needed road reform – it’s being spent on totally unnecessary projects that have no real infrastructure value.

Anyway, earlier this year Riverbanks Zoo – a public-private park located in the Columbia area – completed a pedestrian bridge linking its various parking lots, thus making it easier and safer for families to get to from their cars to the zoo entrance (which is near a main railroad line).

This project was paid for with … you guessed it … penny tax revenue.

The structure – which cost nearly $3 million – is already causing controversy.

For example, there is no ramp to make it is accessible to the disabled (or to parents with strollers, baby joggers or other wheeled carts).  According to a person familiar with the construction of the bridge, there are a a pair of small elevators to help with this issue – but they will not be sufficient to deal with the crowds that regularly come to the zoo during its peak season.

According to our source, an average weekend day at the zoo draws approximately 10,000 visitors – while a peak season day can draw as many as 14,000 visitors.

First responders are also leery of the structure.

“Can you imagine what would happen if we had to evacuate the zoo in an emergency situation?” one told us.  “Those two elevators would be virtually useless given the number of children in strollers and handicapped adults in wheelchairs and walker. This would be a public safety nightmare.”

Seriously: God forbid there be another gorilla escape, right?

How did something so basic get overlooked, you may ask?

Sources tell us zoo director Satch Krantz – who was mentioned in this recent piece on the zoo’s management – thought a ramp would not be aesthetically appealing, so he reportedly nixed that portion of the build.

Even if this bridge were constructed so as to provide maximum accessibility at peak foot traffic times, it would still be a sorry excuse for tax dollars.

We’ve said it before, we’ll say it again: Running a zoo is not a core function of government.

If Riverbanks Zoo is – as its proponents claim – a regional tourist destination, then it ought to be able to pay for its own bridges.

In the aftermath of our earlier story about the zoo we’ve been forwarded plenty of interesting information about this quasi-government entity. Based on that information, we are in the process of preparing a Freedom of Information Act (FOIA) request to see if we can’t turn up some answers.