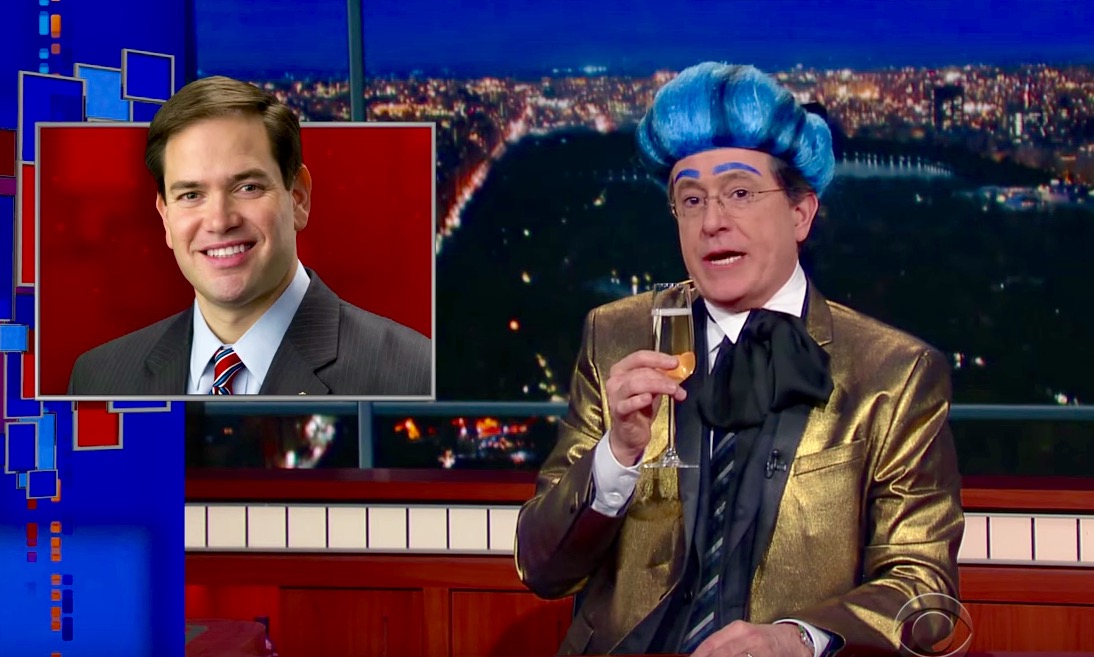 Hailed on the February 18 cover of Time magazine as the savior of the GOP, a month later Rubio is out of the 2016 presidential race – and apparently out of politics altogether.

“I’m not going to be vice president. I’m not running for governor of Florida. I’m going to finish out my term in the Senate over the next 10 months … and then I’ll be a private citizen in January,” Rubio told reporters in Washington, D.C. this week.

Wow.  So was Colbert merciful in memorializing the failed candidate?

No.  Not even a little bit.

Referring to Rubio as “the boy whose birthday party your parents made you attend,” Colbert mocked his “string of triumphant third-place victories” in a Hunger Games-themed sketch on CBS’ The Late Show.

“For the record, Florida votes yes on Jimmy Buffet, yes on releasing pythons into toilets. On Marco Rubio? No thanks,” Colbert said.

Do we feel sorry for Rubio?  Hell no …

Rubio was terrible on immigration, on energy issues, on trade, on the free market, on liberty, on foreign policy … you name it.

In fact Will Folks, the founding editor of the website you are currently reading, had an exceedingly blunt take on Rubio’s collapse.

“My only regret is that we can’t drop kick his ass all the way back to Cuba,” he said.

So … now that the status quo’s last, best hope at preserving its stranglehold on the GOP is toast, what’s it planning on doing?

He received the second gypsy curse. Mitt, the first one. Well Cruz, you are number three and it ain’t gonna be good.

I was going to make a snarky comment, but will hold back. It may have been much, much too cruel.

Congratulations on being being elected the new President of the SC Chapter of NAMBLA, you sick, twisted pedophile piece of shit.

Aww, go ahead, Shifty! Your comments, even snarky ones, are always appreciated!

He’s still funny as ever.

Rubio doesn’t deserve pity, he embarrassed himself with Florida’s loss.

Rubio is still a patriot-unlike Rocky and Flip.

A GI went into a Vietnamese whore house for the first time and asked the madam, “Ummm, is it true that oriental girls’ vaginas are horizontal?” The madam looks at him curiously and asks him in reply, “Why? You play harmonica?”

It’s a wash, Rubio just had his ass defeated in the Republican primaries, and Colbert’s TV rating are in the Crapper. Not much of an upside for either one.

Good points.As ugly/dumb as his failed sister was in her debacle of a political campaign she ran against Sanford I can’t even believe he discusses politics anymore.

LOLZ! They both are equally funny too. They can always hit up a foam party.

I’ll just say this for the GOP. They let this happen to themselves. They bowed to Trump, and now he owns them. Back in September when the came out with the pledge, that’s when the lost it. Everyone had to sign it, and mail it in, but ole’ Trump, he forced them to kneel at his alter in NYC to get it. They should have said simply, “everyone needs to come to the RNC office, sign the pledge in person. Anyone who fails to do so, will not be allowed to participate in the debates. This is non-negotiable.” Had they done that 50/50 shot Trump would have dropped out. And if he had gone and signed it, he’d have been taken down a few notches. Instead they let him walk all over them. And here we are………

Just bend over and take it ya whiny socialist….if Communist Sanders would have had any balls he would have nailed Hillary on the email scandal and protested the communist ‘super delegate’ scheme the Democrat Party has.

Yeah, you’re the king of “bend of and take it” , you nasty ass, sick, pedophile shitstain. Why don’t you confine your comments to your beloved NAMBLA website.

Dang.I may disagree with ‘Flip’ but that wasn’t nice.I don’t believe that about ‘Flip’.

I hope you stay around through November – then the day after the election there will be all these “This Comment Deleted” posts. Pue say!!!

I would like to Rocky but very busy next few months and people are really mean on here going after others families.

Awe come on, you attack my family all the time and I’m still here.

You were right, Pue Say indeed! He already deleted!

Inform your attorney that Pue Say has said the guy who lives at 2587 Conley Rd, Cedarville, OH 45314-9525 is his neighbor. Note that this is between Yellow Springs and Cedarville, Ohio.

If you look via Earth view – maybe we can find a trailer.

That assumes, I think incorrectly, that this guy actually lives in Ohio, and not in Lexington County. Just sayin’………….

He is hilarious. This is another great one by Colbert.

Nice try . can you say cancelled

Finally Colbert did something vaguely funny, props to him. This just might let him last an extra 30 days before cancellation. I wonder who on the staff had the balls to suggest he would be perfect as the outrageous homo on Hunger Games?

“The Hungry for Power Games”

Ohhhh…sooo damn good. I wish I could say I came up with that. Brilliant sketch.

I wonder how Rubio’s mistress is handling all this.

Ifear he is back to “self pleasuring”!

It’s not his mistress. Mrs Rubio and he role play like the Dumfies on Modern Family.

Rubio will probably be able to afford several make believe mistresses in the future. He’ll end up landing a lobbyist job or possibly at one of the big investment firms raking in top money. Look at Demint now – rolling in the chips. Even Kasich did a stent at Lehman Brothers in between his time in Congress and being governor of Ohio.

Wise words from a “wanna be” who would have a hard time getting re-elected to the Senate seat he completely ignored.

Dig up carson . He would be better than that stiff

Absolutely hilarious. Rubio was the darling of center-left-to-moderate Repubs and Dems who could not stomach Trump, Cruz, Clinton, Kasich or Sanders. I feel their pain. But he’s a lightweight poser who could not get traction worth shit. Colbert has still got it, even if Fallon is much more ratings crowd-pleaser. I doubt he’ll get cancelled. In a year or so, he’ll hit his stride and it’ll be more of an even playing field.

Funny Rubio jokes, but Colbert is a dolt like Letterman. Never have had any wishes to watch any of these 3 amigos!