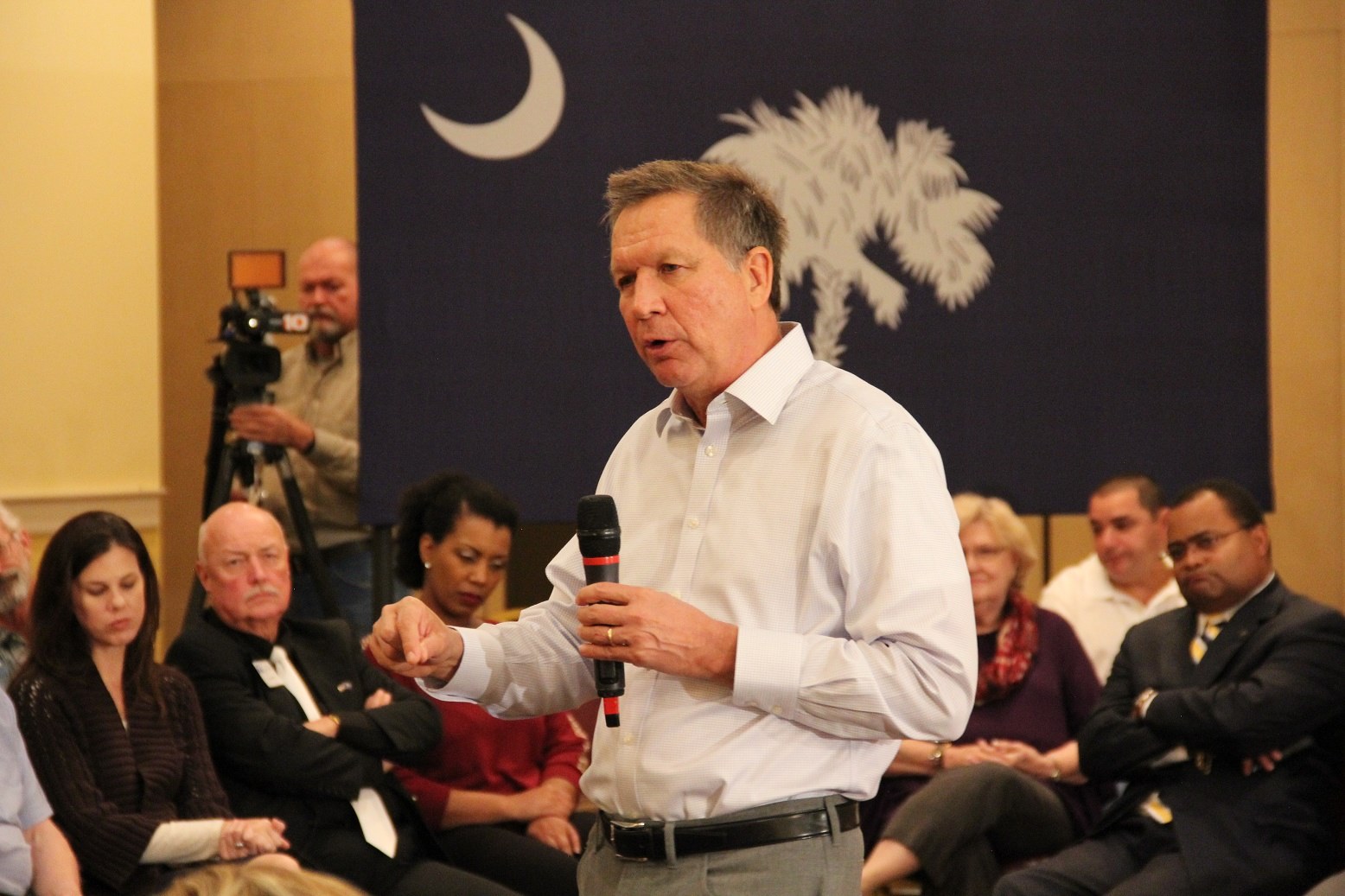 ESTABLISHMENT “REPUBLICAN” LOOKS TO CLIMB INTO “FIRST IN THE SOUTH” CONVERSATION

“Medicaid Jesus” is rising … on the Palmetto State airwaves.

Ohio governor John Kasich – one of three fiscally liberal establishment “Republicans” battling it out for the support of the status quo wing of the GOP – has launched a pair of new television ads in South Carolina looking to capitalize on his surprise second-place finish in New Hampshire.

Kasich’s spots – entitled “Healing” and “100 Days” – aim to introduce him to “First in the South” voters and give them some sense of what he intends to do if elected president.

And here’s the second …

Kasich’s campaign didn’t say how much money it was spending on the two spots, but our guess is it’s not going to matter all that much.  He’s simply not in contention in South Carolina, and in the unlikely event he were to ever gain any traction here there’s plenty his more conservative rivals could hold over his head.

Three decades ago, Kasich was the sort of “Republican” candidate we could have enthusiastically supported – a guy whose commitment to the ideals of limited government, free markets and individual liberty seemed unassailable.   Unfortunately, over the years he has become just another GOP sellout.

Along with U.S. Senator Marco Rubio of Florida and former Sunshine State governor Jeb Bush, Kasich is competing for the support of centrist “Republican” voters.  Meanwhile national/ “First in the South” GOP frontrunner Donald Trump and U.S. Senator Ted Cruz of Texas are battling it out for the backing of the more conservative wing of the party.

A person from Ohio trying to come to SC and convince people that he knows whats best for them. Color me surprised

Reminds me of a certain racist Ohioan who frequently attacks commenters on this site.

If he’s truly from Ohio.

Somebody needs to help SC, you certainly don’t know what’s best for you.

Better off than Ohio if you guys keep moving down here!

I love carpet bagging jackasses from (insert screwed up northern state here) that try to convince themselves they are coming South to help “fix” the problems here instead of facing the reality that they are fleeing the shithole that they created.

Steady there Taz – they’re only escaping the winter – which they didn’t create.

Couldn’t have said that at a funnier moment. Snowing outside my office right now.

Well, they come down here a lot, some to MB. Mainly Kiawah to HH.

It would be important to point out that Kasich’s home state played an important role in the life of South Carolina. Many regiments destroyed everything they could find from Savannah to Charleston, and then up to Camden. Go Ohio, conferate butt kickers.

Kasich did the right thing by going with the Medicaid expansion, I just wish he would do the right thing and improve upon what Obama has laid down so far. Unfortunately he isn’t, so Bernie is who I will support, but I will acknowledge Kasich’s heart in this matter.

I attended a Rubio event in Greenville yesterday. Stating he’s competing for “centrist Republican” votes, is insane. Maybe he’s not the best guy for the GOP to nominate, I don’t know. But his platform and message is definitely right-wing conservative. It may not be Libertarian, and If you prefer that, get out of the GOP and participate in your own party’s primary. Libertarians participating in the GOP Primary process are the RINO’s, as are the Trumpistas, who are responding to their love of authoritarian strong-men (purported in this case) who sell cult of personality. That’s a song, not a political ideology.

Rubio could be our first robot president you know.

The GOP – the Party of Lincoln – is gutless to stand up to Libertarians, fundamentalist Christians and rest of the freaks they have taken into their fold.
It is a shame to see a major political party with a rich history go down the tubes because it’s been taken over by the propaganda hucksters on TV, radio and the internet and the political ‘consultants’.
On the other hand, the party put the propagandists in place, so it’s a case of tail wagging dog and karma is a bitch.

You are a mindless arrogant prick.

Eisenhower, Ford and even Reagan would be ashamed of what the RWNJs have done to the GOP. Nixon wouldn’t because he implemented the Southern Strategy.

Play the 100 day video with the CC turned on. OMG, someone needs to tell his campaign.

“fuck old john Kasich” LMAO!!! Great catch! And then immediately after he approves the message!

Funny and sleezy all rolled together.

A has been that never was. Whoopteee. Stay in the race to dilute the mushy middle moderate vote so Trump can win going away.