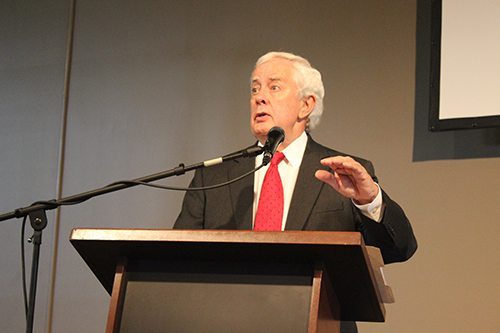 Our readers may recall Jeffcoat as the politician who has been pushing an eight-year, $300 million tax hike at the county level – and the guy who successfully lobbied the town of Lexington, S.C. to pass a $2.1 million annual tax hike last year.

Oh … he’s also the guy who has referred to tax hike opponents in Lexington (like the founding editor of this website) as Mormons.

The group, which goes by the name of “People for a Better Lexington,” sent a letter to SCSEC executive director Herb Hayden earlier this month alleging Jeffcoat “improperly used his position as an elected official on County Council to secure high-paid employment for himself in the Town of Lexington.”

Additionally, the group alleges Jeffcoat has “used his official office to secure annual pay increases for his town position that were above and beyond what was available to town employees.”

“We are alleging that Councilman Jeffcoat violated the state’s ethics laws … which prohibit elected officials from knowingly using their official office to obtain an economic interest for themselves and from influencing a governmental decision in which they have an economic interest,” the letter stated.  “On behalf of thousands of hard-working government employees and taxpayers in Lexington County, we respectfully ask that the State Ethics Commission investigate Councilman Jeffcoat’s conduct.”

Jeffcoat reported his salary as “personal income” on his filings with the SCSEC – although in 2015 he listed his salary (which had grown to more than $90,000 a year) – as “family income.”

He also receives more than $20,000 annually from county taxpayers.

“These monies were given to Councilman Jeffcoat during a time of great financial pressure on many families in Lexington County, as they struggled through the economic recession, with many people losing their jobs and homes,” the group’s letter to the ethics commission read.

Based on its track record in the past, we doubt it …

This agency is as toothless as it is gutless.  Also, even if it did conduct a formal investigation – the SCSEC is notorious for issuing slaps on the wrist to influential politicians.

Jeffcoat is not seeking reelection in 2016, although he continues to push for tax hikes at the county level.

We continue to oppose those hikes on principle …