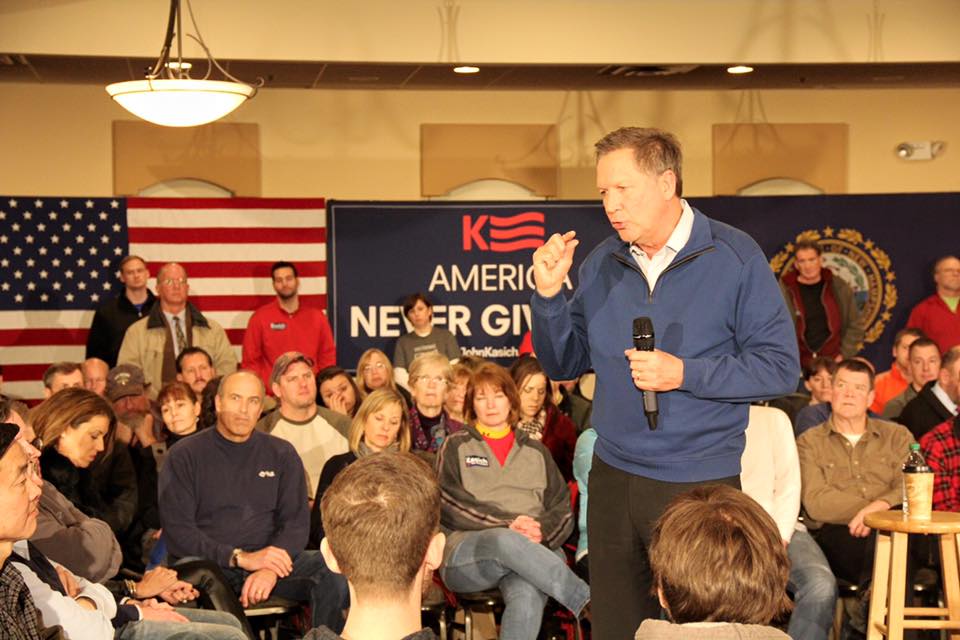 Ohio governor John Kasich – a.k.a. “Medicaid Jesus” – is the GOP establishment’s flavor of the week following his second-place showing in early-voting New Hampshire this week.

“Maybe, just maybe, at a time when clearly change is the air, maybe just maybe we are turning the page on a dark part of American politics,” Kasich told his Granite State supporters.  “Because tonight, the light overcame the darkness – and you made it happen! You made it happen!”

That’s some pretty lofty rhetoric from a guy whose high-water mark is 16 percent in one state … and whose prospects for duplicating this modest feat are hit-or-miss.

Nonetheless, the press got just as caught up in the “Kasich moment” as the centrist candidate did.

“Compassionate conservatism is back,” the left-leaning Huffington Post declared.

It’ll be interesting to see if Kasich can sell his “hope and change” message in South Carolina – which holds its “First in the South” presidential primary on February 20.  After all, Kasich will have to show Palmetto State voters the difference between “compassionate conservatism” and pay-to-play crony capitalism … the sort that his cronies have engaged in at the direct expense of roughly 300 South Carolina jobs.

Good luck with all that …

On the other end of the handout spectrum, Kasich will also have to explain how his Jesus-inspired Medicaid expansion in Ohio has wound up costing that state’s taxpayers billions more than he projected.

Yeah … good luck with that, too.

This website is obviously no fan of Kasich.  In fact we think he’s far worse than most of the establishment “Republicans” seeking the presidency.  How come? Because he knows better … and used to act accordingly.

“In the late 1980s and early 1990s, he was a real pro-freedom, pro-free market champion … but in recent years he’s become just another status quo Republican hack,” we wrote last spring.

Of interest?  Kasich is focusing his South Carolina campaign almost exclusively in the Palmetto Lowcountry – the more socially liberal region of the state – and in South Carolina’s sixth congressional district (which is dominated by Democrats).

Frankly, that says a lot to us about where he thinks he can pick up votes … and where he knows he can’t.

I remember when he was Conservative “Firebrand”. Sigh.

Compassionate conservatism: “We’ll lend you a pillow so dying on the curb outside the hospital is a little more comfortable!”

Medicare for all or bust!

“Medicare for all and we’ll go bust!

You just get a little carried away sometimes, don’t you?

Kasich does seem like a real person as opposed to a bunch of talking points at least.

Do believe his photo says it all:

Yes sir, I am going to spend billions and billions of your $money, however I promise you I will only stick my POTUS dick up your taxpaying ass this far, cross my heart and hope to die !!

JT will give you medical care when you need it! Just like he “loaned” you a car during your Gubmint service! I hope your blog feeds the repub hungry – they like this crap. Many read it just to see how crazy you and The Colonel (R) are.

So that explains why CNN was giving him so much air time last night. More ‘healing’ than I could absorb. Thanks.

Jeb’s wounded, Marco’s deflated, Kasich is the last hope of the YYyy-stablishment. Once he falls this election is over.

I’ll take Kasich over a full of shit Cruz. I’ve worked in the White House and firmly believe the expectations of influence the office truly holds are way of whack. Kasich is a reasonable person, comfortable in his own skin, and not bat-shit insane which truly sets him apart this year.

Amen Whit! Thanks for bring some rational perspective to this post.

In the late ’80s and early ’90s he was a congressman free to pontificate about ideology. Then he became a governor and actually had to get shit done for his state.

Think about it this way:

Getting shit done has resulted in over $19 Trillion in debt(not inculding off the books debt)- which will never be repaid and if interest rates ever raise again(prior to a potentially even worse event, like a currency crisis) and they hit less than 6%, the government will actually not be able to cover the interest payments on the debt unless they create more money/debase the currency further.

lol…ok, you have a good point. Let the party roll on.

Who the hell do you think put the last two wars on the national credit card.

I don’t disagree, but if you are suggesting that the Dems would bring fiscal discipline back you are deluding yourself.

Let’s also not forget that Obama hasn’t stopped any of the ongoing wars and just caved in to the Neocons on military spending.

“Let’s also not forget that Obama hasn’t stopped any of the ongoing wars and just caved in to the Neocons on military spending.”

Are you kidding us? Let me introduce you to Sen Mitch from KY and his statement about cooperating with Obama and the budget sequestration. Newt & Bill C passed successful budgets and W was selected by the Supremes. Then all went to hell resulting in his economic depression. Reality is hell for repug recall

“Are you kidding us?”

No, I’m not. You’ve yet to explain why Obama has continued the wars and you ignore the cost of that.

Mind you, none of this is a defense of/for Republicans, I’m just pointing out your partisan blindness.