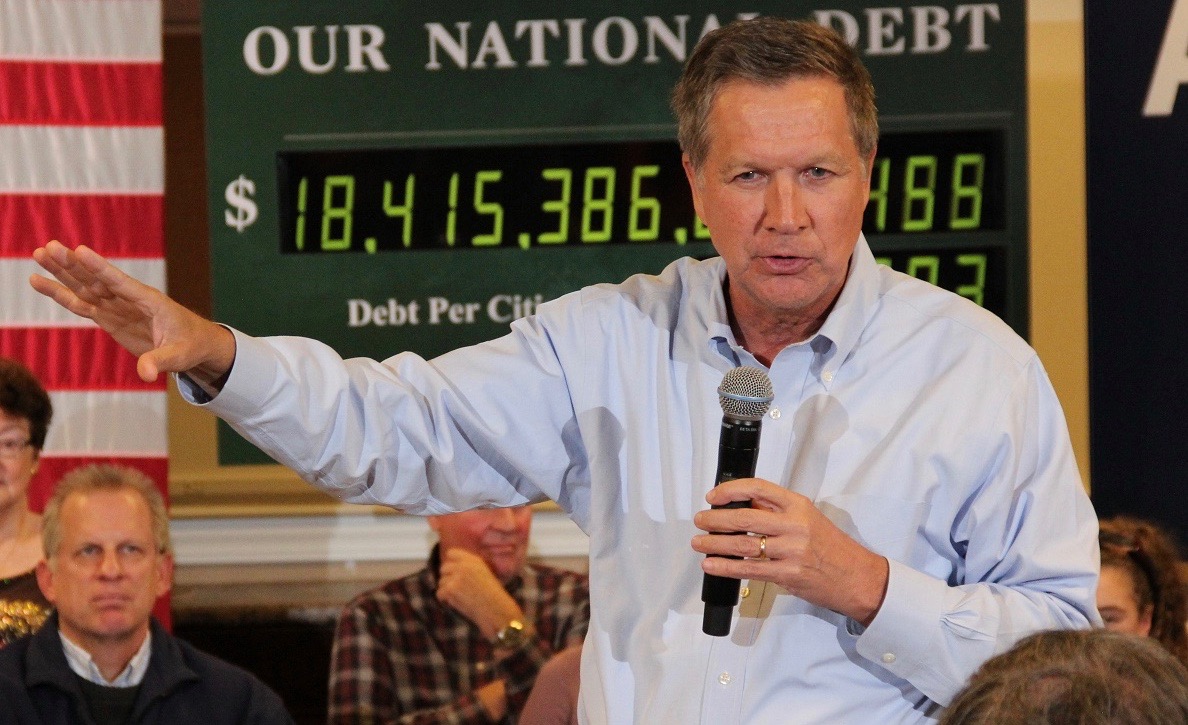 This website doesn’t like Ohio governor John Kasich very much.  It’s not just that he’s another status quo big government “Republican” (there’s obviously no shortage of those running for president this year), it’s that Kasich used to be one of the good guys.

“During the mid-to-late-1990s, Kasich and Sanford were the genuine articles – emerging as budget-hawking, liberty-loving lawmakers who lent ideological legitimacy to the 1994 ‘Republican Revolution,'” we wrote not long ago.  “In fact they both stood up to liberal U.S. Speaker Newt Gingrich when he went native – aborting that revolution.”

Today Kasich is part of the problem, though, as evidenced by his Jesus-inspired Medicaid expansion in Ohio – which is going to cost billions more than he originally predicted.

Kasich also has a crony capitalist problem … one we explored in detail in this post about a company that shed South Carolina jobs (after receiving taxpayer-funded incentives).

Kasich’s connection to that company – and other companies he has supported in the past with Ohio tax dollars – is now coming under fire at the national level.

According to a report from Isaac Arnsdorf of Politico, “some of the biggest donors to the super PAC supporting long-shot Republican presidential candidate John Kasich have relationships with the Ohio governor that have generated ethics complaints during his time in office.”

Oh, and precisely none of those companies responded to Arnsdorf’s attempts to reach them for comment.

One of the companies included in Arnsdorf’s report – Worthington Industries – was also featured in our story on the loss of 300 jobs in the Pee Dee region of South Carolina.  Kasich was tapped to the board of directors at Worthington shortly after he stepped down from the U.S. Congress in 2001 – and stay on its board until 2011.  From 2007 to 2011, he was paid $611,000 by the company.

Since becoming governor of Ohio, Kasich has rewarded his old firm with hundreds of thousands of dollars worth of tax breaks.  In fact a “job creation” panel appointed by Kasich doled out $619,000 to subsidiaries of Worthington Industries – which in turn has donated tens of thousands of dollars to the Ohio “Republican” party (in addition to lining Kasich’s pockets with “deferred compensation”).

Anyway, Arnsdorf notes in his report that Kasich’s crony capitalist problem “has yet to follow him to the national stage.”  Which is probably because Kasich hasn’t made it to center stage at any point during the 2016 race.

But he’s firmly ensconced as one of several second-tier GOP hopefuls – meaning he’s one liberal “MSM whim” away from being gifted with the sort of momentum that could propel him into the top tier.

Kasich is also pushing hard for top tier status, telling his supporters this week that “Americans deserve more than what they’re getting from the so-called ‘front-runners.'”

Kasich used to be one of the good guys.  Not anymore.

FITSNews: The leading news site in America talking about EVERYTHING no one cares about…

PS: We KNOW why you are fixated on GOP candidates w/ NO chance…You fool NO one, except the fools…like you…

Those tax incentives were available to any company investing in Ohio, creating jobs in Ohio. There is no bribery here, there are only your false allegations which are, slimy.

I prefer the term ‘legalized bribery’

I remember Kasich for the strident, screaming conservative he was in his House years.
But, actually doing something like expanding Medicaid for ‘the least of these’ is way more Christian than anything we have seen or will see out of these 21st century ‘Christian’ Libertarian con-servative hypocrites.

Christian Libertarian is probably an oxymoron if you ask most libertarians. I don’t, because I’m not one. Nevertheless, it’s absurd to bring up a taxpayer-funded system and try to show it as some sort of charity, whether Christian-based or not. I’m tired of hearing that nonsense. Medicaid is already available for “the least of these”. Expanding it is irresponsible. Bottom line. Anybody trying to cloak it with gospel significance is also irresponsible with the scriptures.

Who’s not a sellout?

Kasich. A has been that never was. Let’s flush this turd and move on.

I agree with FITS assessment, He was a common sense every man at one time. Was it real and then corrupted by the system? I don’t know. it is becoming clearer to me that the whole “D vs R” thing is a ruse. It is more inside DC vs Outside DC. I think Congress should be required to stay in their districts and use go to meeting software for committees, speeches, and votes. Keep them out of the cesspool so to speak.

That is exactly what the “SHERIFF” of the House ,James Trafficante, said.
Course, he eventually went to prison.

Hey Rogue.Hope all is well.You are correct about Kasich and his expansion of Medicaid will bankrupt the state.

Frankly he is weird and he benefits from a very weak Democrat Party in Ohio.

Hey flip – knew this one would catch you. So my wife and I watched last night, she like Kasich. But it doesnt matter, Trump won.