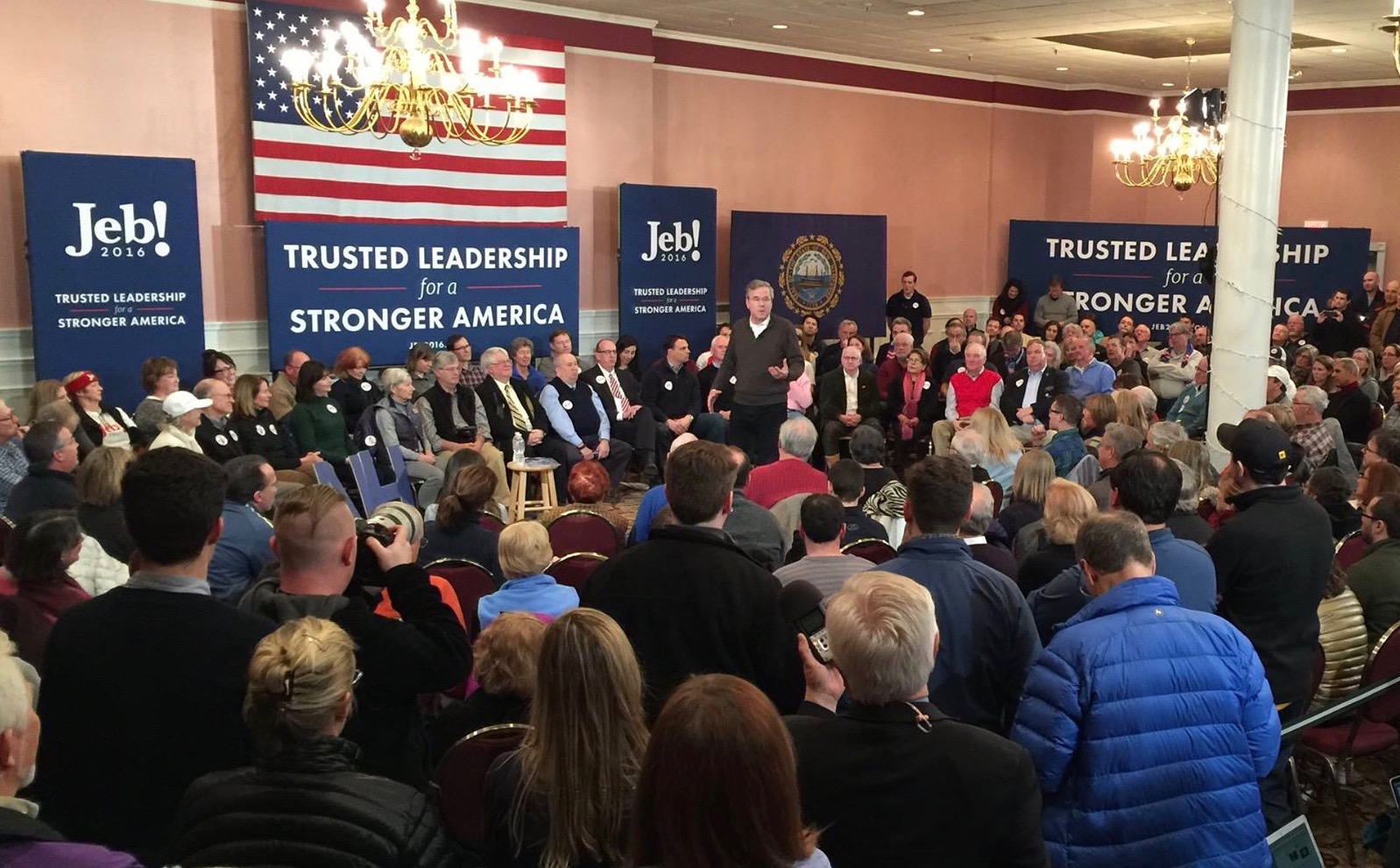 Money cannot buy love … but it can buy votes.  Assuming you’re willing to pay enough for them.

Late Tuesday, as the election results rolled in from early-voting New Hampshire, supporters of former Florida governor Jeb Bush touted his campaign’s resurgence heading into the “First in the South” presidential primary in South Carolina.

“Jeb is the candidate coming out of New Hampshire with momentum on his side and a path forward,” Bush spokesperson Allie Brandenburger said.

Bush finished in sixth-place earlier this month in the Iowa Caucus – earning a measly 2.8 percent of the vote.  Add his expenditures up and Bush spent roughly $3,000 for each of his 5,238 votes.

In New Hampshire, Bush finished in fourth-place with 11.1 percent of the vote.  This marginally improved outcome prompted a burst of what Alan Greenspan once termed “irrational exuberance” from the charisma-challenged establishment candidate.

“You have given me the chance to go on to South Carolina,” Bush told his supporters. “We are going to do really well there.”

Well … he’s certainly spending the most money in the Palmetto State, but will it translate into votes?

It did in the Granite State … but only to an extent.

Bush appears to have spent roughly $1,200 per vote in New Hampshire … which is more than a hundred times what U.S. Senator Ted Cruz of Texas spent per vote on his 11.6 percent third-place finish.

That’s insane … it’s also instructive regarding the difference between real support (a.k.a. Cruz’s voters) and backing you have to buy at insane costs.  In fact the other “Republican” establishment candidates all spent big bucks (with little return) in New Hampshire – with New Jersey governor Chris Christie shelling out more than $800 per vote and U.S. Senator Marco Rubio of Florida spending more than $500 per vote.

Rubio is also among the big spenders so far in South Carolina … where the badly-divided status quo wing of the GOP had hoped to erect a firewall against the insurgent campaigns of Cruz and national frontrunner Donald Trump.

Now these fiscally liberal “Republicans” must continue to do battle with each other – while checking the rise of another establishment rival, fiscally liberal Ohio governor John Kasich (a.k.a. “Medicaid Jesus“).

That means the likelihood of all of these candidates spending more special interest money on modest outcomes … while Trump and Cruz continue to rake in the populist groundswell of anti-establishment support.

Trump will take SC by a land slide. Bush, no more than five percent at best.

Oh, it’s settin’ up to be a huge, Huge, Cruzista and Trumpito fight. It’s gonna be nasty. Just like Cruz. Donald carries the sticks and midlands, Cruz sweeps upstate. Kasich or Jebito are third with Low, low, lower Country votes, and then we’re off to Floryda. And Trump will win big, big I tell ya.

Bush is a cry-baby

Sounds like Jeb is ready for a nice cozy white jacket… LMAO!!!

Rocky, you are on your way to becoming a “rock star”, but when you put your band together how about your showcase dancers, say similar to the Rockettes (you probably can’t use that name, but something similar) — will you let Mrs. Rocky be the lead dancer?

We’ll call them the Trumpets.

You’re a pal, Rocky, choosing Natalie for me —- when can we double date? We can go to a few of the primary night parties — you can get us into Trump’s/ Rita can get us into Rubio’s/ Natalie can get us into Cruz’s ( I think she speaks some Canadian)/ and I’ll get us into Jeb’s so that he can endorse my check…..

He could always borrow it from China.

saudis baby, rumor has it they like to hold hands

Word is New Jersey residents are demonstrating in the snowy streets and revolting, afraid Christie will suspend his campaign and return to work.

All those Trump voters are CHEAP.

If Trump does not win you will see that number decline by 90k.

the screen is playing hop-scotch again ——–

Mine did that frequently while I was on yesterday. And it has been continuing today.
Aggravating as hell.

2 days now. Yesterday the site was determined to make me read the penny tax waste article whether I wanted to or not.

So much for the export slowdown for South Carolina. At least not at BMW….
http://www.greenvilleonline.com/story/news/2016/02/10/bmw-reigns-again-nations-largest-vehicle-exporter/80174524/?from=global&sessionKey=&autologin=

Hah! I got my mail a few minutes ago and there was an envelope from Jeb Bush. Inside was a check from his campaign payable to me(!) in the amount of
$ 999.99 with a note saying I can keep it only if I don’t mention his name — anywhere! Yikes!! I just noticed that the check is dated February 22, two days AFTER the SC primary.

$1200.00 per vote. And he talks about being a “conservative”. WOW With that kind of money management he would make a great Dim. LOL

The hope is he can survive long enough for Rubio to go away, leaving him to inherit Rubio’s support. I do not think it will work.

The establishment types are going to wait till the convention , and if Trump dosent win it on the first ballot they will try and steal it from him . Just because the voters want him doesn’t mean it is over. Wait and see how this plays out.

Hey Jeb. I own a property on a major thoroughfare in the upstate. I intend to erect Trump signs at no cost to the Donald’s campaign.

The space is yours for an easy $3000. That will cover my property taxes for the year.
Call me baby!