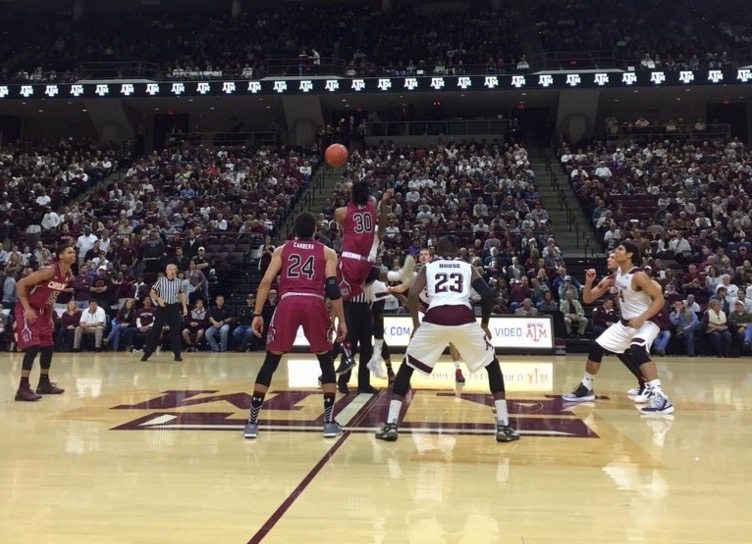 The University of South Carolina men’s basketball team earned its signature win of the 2015-16 season (so far) with an 81-78 victory over No. 8 Texas A&M on the Aggies’ home court in College Station, Texas.

The Gamecocks (20-3, 7-3 SEC) withstood a furious late rally from the Aggies (18-5, 7-3) – whose 8-1 run in the closing moments of the second half turned a nine-point South Carolina lead into a nail-biter that would go down to the final possession.

“Last year, this is the type of game that we would have blown,” junior guard Sindarius Thornwell said after the game.

Thornwell led the way for head coach Frank Martin‘s resurgent squad with a season-high 25 points – adding nine assists, six rebounds and three steals.  Senior forward Michael Carrera – the team’s undisputed floor leader – added 20 points and four rebounds.  As he has all season, Carrera nailed several clutch three-point shots in the second half to keep South Carolina close when Texas A&M appeared to be on the verge of blowing the game open.

The gritty win marked the Gamecocks’ first road victory over a Top Ten opponent in a decade – and gave Martin his first 20-win season at South Carolina (he hit that mark in each of his five seasons at Kansas State from 2007-08 to 2011-12).

Needless to say, the temperature under the fiery coach’s chair has cooled considerably as the Gamecocks seek to earn their first NCAA tournament appearance since 2004 (and record their first NCAA win since 1974).