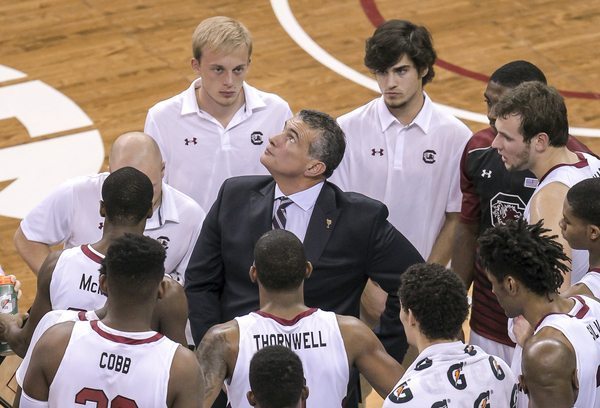 It’s taken him some time, but University of South Carolina head basketball coach Frank Martin appears to be turning a corner with the Gamecock men’s basketball program.

Martin’s 2015-16 squad – his fourth – has raced out to a 9-0 start.  That’s the best run to open a season in more than four decades.  Meanwhile the Gamecocks are nationally ranked (No. 25 according to the latest USA Today/ Coaches’ poll) for the first time in more than a decade.

This fast start has also evened Martin’s record at USC … he is now 54-54 since being hired as the Gamecocks’ head coach by former athletics director Eric Hyman back in 2012.

Obviously that’s a far cry from his 117-54 mark during his five seasons at Kansas State, but the trend lines are promising.

Last year Martin’s team showed flashes of life, winning a pair of games in the SEC tournament to secure his first winning record at South Carolina.  Will this be the year the Gamecocks take it to the next level?

We hope so … especially seeing how successful the Gamecock women’s basketball program has been.

Martin’s team has three tough non-conference games over the next two weeks – against arch-rival Clemson, St. John’s and Memphis – prior to diving into Southeastern Conference play on January 5 against Auburn.  That’s historically been where his teams have fallen apart, posting an anemic 15-39 conference record over the last three seasons.

Those implosions have made Martin cranky … to say the least.

The stakes couldn’t be higher.  South Carolina hasn’t been to the NCAA tournament since 2004 – and hasn’t won a game in the “Big Dance” since 1974.  The program also hasn’t won a conference tournament championship since 1971 – and has had just two winning seasons in the past nine years.

That’s the sort of atrociousness Martin was hired to correct …