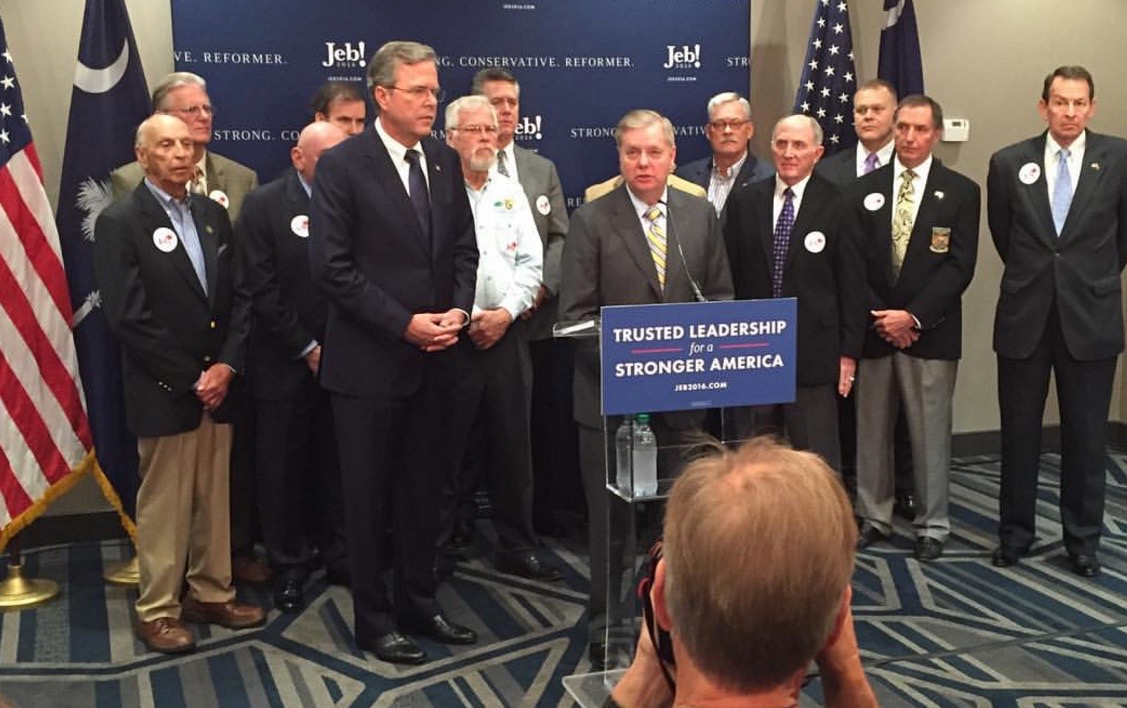 Former Florida governor Jeb Bush will receive the endorsement of U.S. Senator Lindsey Graham of South Carolina … for whatever that’s worth.

Graham – who abandoned his 2016 presidential campaign after polling at less than zero percent support for months – endorsed Bush at a press conference in North Charleston, S.C. on Friday morning.

(No word yet on whether the two shared brunch and a round of golf afterward).

“His endorsement is very meaningful and along with it come a lot of friends and supporters of his,” Bush told Fox News.

When he exited the presidential race, Graham was polling at 1.7 percent in early-voting South Carolina … down from a peak of 15 percent in mid-April.  That’s according to aggregate polling data from Real Clear Politics.

Graham’s endorsement came a day after Bush failed to make an impact in a “Republican” presidential debate in North Charleston.  The one-time GOP frontrunner is currently polling at 8.5 percent in the Palmetto State – down from a peak of nearly 18 percent last spring.

Bush hailed Graham as “the most knowledgeable person on the Hill as it related to national security, military affairs and foreign policy.”

No.  Graham’s “military experience” has been widely mocked, and his support for U.S. armed intervention all around the globe is unsustainable fiscally – to say nothing of counterproductive when it comes to our national security.  It also puts American weapons in the hands of some exceedingly unsavory characters.

I’m just going to say it: is this really a shock to anyone? I mean, honestly…did anyone read this and not immediately think, “Of course he will. Lindsey Graham WOULD endorse Jeb, of all people.”

Just a question.WHICH is a bigger kiss of death for a politician-an endorsement from Haley or Graham?

other than a midair collision with trump’s and cruz’s jets, i see no path to the nomination for jeb.

I have a plan for Jeb. Sucker punch Trump, do the time, threaten him again.

You liberals sure are violent.I thought your therapist told you to get your GI-Joe toys out of the closet when those bad thoughts started permeating your sic mind?

That’s how it was in my prime. 2 Marines settled their problems. Men were men, women were proud of it. Today’s times are very different, look at all the faggots like YOU running around. Be glad Obama protects people like you.

Take your meds.Projecting threats onto Presidential candidates with SECRET SERVICE protection may just you a visit. :)

Glad to hear from ya, hope yours are fine, thanks.

Well you were already there so……..

RINOs of a feather flock together

An endorsement from Lindsey is the equivalent to the fat lady warming up.

Maybe the two can get a room and have a good cry.

Five weeks go by, $2,500 down the drain and not a thing to show for it. Milo was so mortified and angry that he went down to his office, barged right in, and said, “What’s happening? What’ve I got to show for my $2,500?”

He said, “They’re saying, “Whatever happened to Milo Moroni?”

Hey, what do ya know…I made the front page.

Graham was in it for Bush from day one. His plan was to help split the vote. Jeb stutters. Ever notice? His brain is not firing on all 8 pistons. He talks then stops, repeats the last word or changes the topic, then continues with creepy regularity

I’ll have to watch for that ….

US President George Barnett and Israeli Prime Minister Shoshana Vohu met here today regarding on-again off-again peace negotiations and though, as expected, no breakthroughs
were announced, the two leaders pledged their commitment to the long-standing “special relationship” between the US and Canada.

Talks focused on the role of an objective mediator, pressure for concessions, the need for secure borders, and the possibility of reassessment.

But the Jerusalem government asserted that it will continue to supply the US with the sophisticated weapons Washington
needs even if the US and Canada
are unable to resolve their bitter territorial dispute. Israel has also been aiding Canada.

Yesterday marked the ninth anniversary of America’s attack on her northern neighbor (Washington still insists on the term “defensive maneuver”). Israel has sought to act as an
honest broker in the dispute, offering arms to the US if it will agree to return Toronto to the Canadians and lawyers to Canada
if it will agree to withdraw its army from Detroit.
Israel’s expanding law schools, already turning out enough lawyers to maintain 700 battle-ready regiments of military attorneys, anticipate no difficulty in fulfilling Canada’s need for barristers.

“We do not expect peace overnight,” an Israeli spokesman said, “but we are talking to both sides and will remain even-handed.”

The Canadian Prime Minister is expected to follow President Barnett to Jerusalem in hopes of reviving the stalled peace conference, and (continued on page 75)

The markers have been called in. It goes from the Bushes through the Wilkins to Lindsay. If you listened to the press conference it was clear that Graham’s arm was being twisted. In the past I have been a supporter of Graham but this is disappointing. Haley got puppeted by Bush/Christie and the GOP leadership took her to the woodshed when she alienated Rubio with the follow-up comments about Trump.

Jeb Bush is a joke. IF the GOP nominates the guy at the back of the pack it will solidify the base for a legitimate third party. They can’t risk that. Trump or Cruze 50/50

Lindsey would have trouble in Las Vegas!

Analytics are wonderful things. Here’s something from a NY Times analytics piece about Donaldo – Dec 31 – (who by the way takes it and says he’s winning NY) –

“Donald Trump holds a dominant position in national polls in the Republican race in no small part because he is extremely strong among people on the periphery of the G.O.P. coalition.”

Nearly 20 percent of likely Democratic voters say they’d cross sides and vote for Trump, while a small number, or 14 percent, of Republicans claim they’d vote for Clinton. When those groups were further broken down, a far higher percentage of the crossover Democrats contend they are “100 percent sure” of switching than the Republicans.

The ‘base’ of the Republican Party will turn out as they know America is finished if another Democrat Socialist is elected.Blacks are the ones that will be sitting at home.

Remember Perot? Remember all the Dems and angry white GOPPERS who were going to take back America? And then didn’t show up to vote?

I read that entire article, it says that combined, those leaning GOP or registered GOP or Dems who support Trump, cluster within a group that have a less 29% chance of ever showing up at the polls.

You’re such an uninformed idiot.

Perot voter turnout was dismal that year. And the same will happen with Donald. All these Donald supporters who go to his rallies, etc, will not turn out. You watch. And that’s not even factoring in the big money that will go to defeat Trump. The commercial class will flood money to knock him off. Manufacturing companies, banks, Wall Street, IT giants, telecom companies. His ‘billions” ain’t nothin’ compared to what the Chamber guys are gonna come with.

Again, Trump’s people won’t turn out to vote. You’re missing the analysis. The data analysis is telling you, Trumpland, we have a problem.

You are such an idiot.One third of the ad money so far in the Republican primary has been PAC money from all the groups listed above by BUSH. How has that worked for him?

Damn you are becoming irrelevant and stale in your hate for this country.

All 0% of Lindsay’s voters will jump on the Yeb! bandwagon.

Saw Trump this morning bragging about how strong he does in NY. Then you research it and it shows he’s only doing well in Upstate. Like winning Seneca County is equal to losing NYC. Hey, maybe the Bubble Boy will vote for him.

Even if Trump loses New York, he’ll make it so competitive that Hillary and the Democrats will be forced to spend precious time and money defending New York. Which means they have less money to spend on razor-close battleground states like Ohio, Florida, Iowa and Virginia. Either way, Trump wins.

Trump is their worst nightmare.

Again, they’re not going to turn out to vote. They’re the same demographic that ran to Perot. Trump winning NY is nearly impossible. Like I said, winning counties that have a total population of about 2 million, while losing the southern tier and NYC with 8 million, ain’t winning crap. Upstate is fly over country. Have you even ever been there? Winning Junius Township with all the 3,400 people that live there, while losing Manhatten – geesh!!!!

Trump’s campaign is now referred to as a movement. Voters of all stripes are joining . He is saying what most Americans have been waiting to hear. We are with Trump. We are pissed. We are taking our country back. Trump 2016.

Jebulan is a fine and upstanding man, and deserves our vote.

Thursday’s prime time debate, televised by the Fox Business Network, averaged a 7.4 household rating in the country’s top TV markets. Viewership totals won’t be available until later in the day on Friday. But the household rating suggests a total audience of 10 to 12 million people.

Compare that to the State of the Union – An average of 31.3 million viewers watched as the president spoke for an hour about optimism, change, and the future of the country Tuesday night, according to Nielsen data.

Over 100,000,000 people have watched the Republican debates on a SINGLE network.The SOTU was on SEVERAL networks.I watched Obama to remind myself how evil and deranged this American hating bastard is.

Now you’re just confusing the poor boy. How can he be on three channels, there is only one of him???

So? Graham would not have carried his own State had he stayed in. Hopefully the Ruling class Dynasties will be gone in a few elections: Bushs, Clintons, Eckstroms, Wilsons, Ravenels, Peelers, etc. So long and good riddance!

I hope we do, totally!!!! These self-serving scumbolis are what has put this country in the shape it is in.

The other day I heard someone say Lindsey Graham was running for President… wouldn’t THAT be a HOOT!!

So Jeb will pick up all 6 of Graham’s supporters! Woo Hoo!

Loser + loser = LOOOOSER . Around the bowl and down the hole. Both of these turds aren’t enough to clog the pipe. LOL

An endorsement by Lindsey: the equivalent of being given a puppy by Mike Vick.