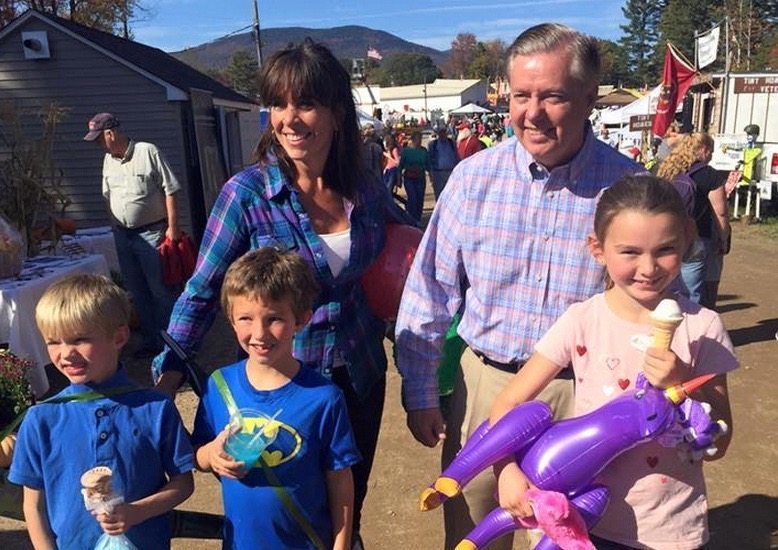 Liberal U.S. Senator Lindsey Graham‘s presidential campaign is an increasingly bad joke – but we’ve known that for months now. In fact, it’s high-water mark was the day he announced.

Yet inexplicably, Graham presses on …

Despite drawing less than four percent support in his home state – and getting booed lustily when actual contenders call him out on his liberal record in his own backyard – Graham perseveres.

And while he’s not even strong enough to play spoiler in South Carolina, he is freezing out much of the state’s political establishment – which is comprised of squishes who doesn’t want to anger a sitting U.S. Senator with five years left on his term (not to mention an itching inferiority complex).

So we suppose he’s having some impact …

Anyway, in the latest example of his ongoing national irrelevance Graham barely qualified for a “Republican” undercard debate this week when he drew one percent support in a late-breaking CNN/ ORC poll (.pdf here).

This anemic showing allowed Graham to (barely) make the stage of the so-called “junior varsity” debate scheduled to air October 28 on CNBC.

Yeah that’s right … Lindsey Graham got one percent.  In one poll.

Forget qualifying for the main stage at any of these “Republican” debates, Graham is fighting for his life just to stay on the undercard.

It’s time for this embarrassment to end.  Lindsey Graham needs to drop out of the 2016 race – now.

Lindsey Graham got one percent. In one poll.

No doubt they had to round UP to get to even that one point.

While Graham may be getting only 4% in his home state, Jeb Bush is only get 9%.

Obama is at 80% in Iran for giving them nukes and 25% with ISIS for giving them Iraq and Libya.The Taliban give Obama a 80% approval rating for trying to give Afghanistan back (before the military said no) before 2017 and the trade for Bergdal.

Looking at the pic and the article title, I thought this was going to be about Lindsey paying the pretty lady and her kids to pretend they were his family so Republicans who hate gay people would think he is straight.

You assume however that a majority of the electorate know “gay” when they see it. That might be a weak spot in your theory.

What ones sexual it is in his own mid is his own business. There has never been an issue with Graham’s lifestyle. And believe me, with today’s diverse media, even gay media would report it.

Why people would constantly be wondering about the sex-life of boring old white guys or anybody is beyond me.

Got turned down one too many times by drunk frat boys, I see.

Nearly 4 percent in the polls for Lyndsey. Trey got exposed and sent away by his own party.
I’d say you’re wrong.

Just a dumb joke about the hair. Graham stomped his Senate competition.
They tried to recruit Gowdy as speaker. I say you are wrong.

Lindsey’s GOP establishment job at this point is to try to bloody Trump’s nose somehow(good luck with that). His personal goal is some limelight and maybe a cabinet position.

Are you referring to Rand Paul or Lindsey Graham?

I don’t get it, I did this dumbass live feed of a day in the life of me and still no one wants to vote for me.

Pretending that you are running for president is the latest, greatest way of enriching yourself for GOP politicians. Just collect PAC money and cash out after you drop out. Lyndsey and the other pretenders are doing very well in that aspect. Once Trump has to start REALLY using HIS money, he’ll drop out too, because he can’t afford to damage the Trump brand by looking like a regualar rich guy instead of a ‘billionaire non-loser guy’. You’ll see.

Nice beard ,Lindsey.And children ? That’s so low down ,you could crawl under a duck and not touch a feather

(Lindsey) — It wasn’t him, Charley, it was you. Remember that night in the Garden you came down to my dressing room and you said, “Kid, this ain’t your night. We’re going for the price on Trump.” You remember that? “This ain’t your night”! My night! I coulda taken Trump apart! So what happens? He gets the title shot outdoors on the ballpark and what do I get? A one-way ticket to Palooka-ville! You was my brother, Charley, you shoulda looked out for me a little bit. You shoulda taken care of me just a little bit so I wouldn’t have to take them dives for the short-end money.

(Charlie) — Oh I had some bets down for you. You saw some money.

(Lindsey) — You don’t understand. I coulda had class. I coulda been a contender. I coulda been somebody, instead of a bum, which is what I am, let’s face it. It was you, Charley.

He does not know how to count. How did he ever get elected again?

Hey! He has outlasted Jim Webb.

At this point, it’s just Graham giving some friends a payoff by paying them to run his campaign. He knows he can’t win. But let’s hope this destroys him from being re-elected in South Carolina.