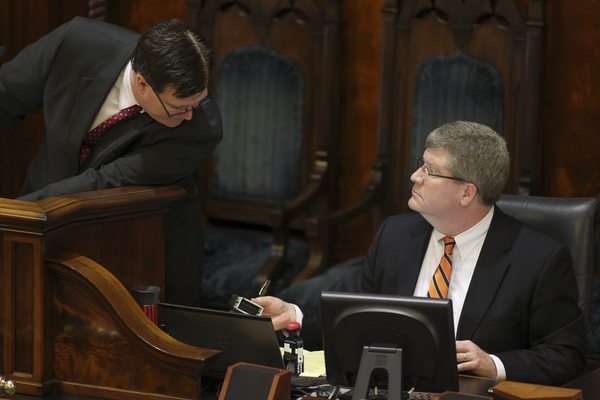 BUT CAN HE HANG ON LONG ENOUGH TO GET IT?

S.C. Speaker of the House Jay Lucas is one of the most powerful men in the Palmetto State.  He’s in command of one half of South Carolina’s all-powerful legislative branch – which wields almost absolute authority over the other two branches of government.

But Lucas – a fiscal liberal who hails from the dirt poor (well, poorer) Pee Dee region of the state – never really planned on becoming Speaker.

The job fell in his lap …

And now that Lucas is a year into the position, it’s becoming increasingly clear that he doesn’t enjoy the scrutiny that goes with it.

“He’s not happy,” one ranking “Republican” in the S.C. House told us. “He’s looking for the exit.”

The ongoing fallout from a brutal debate over the Confederate flag has left Lucas “reeling from the feeling” – and last month’s dust-up over an aborted campaign school has showed how badly divided his caucus is heading into an election year session of the legislature.

So, what does Lucas want to do?  According to our sources, his original goal upon entering the House (and then quickly climbing its ranks) was to put himself in position to become a S.C. Supreme Court justice.

As the Speaker’s job continues to wear on him, Lucas is said to be focusing more intently on that prospect.

The problem?  This year’s judicial election is already set – and next year’s race already appears to have a frontrunner (one reportedly endorsed by Lucas).  Due to ethics requirements and a lack of future openings, Lucas would have to wait up to three years for his shot at this less scrutinized position of power.

Will he?  And with his hold on the Speaker’s gavel more tenuous than ever … can he?

Sources close to the situation tell us Lucas’ potential slippage into “no man’s land” is being exploited by the neo-Confederate political empire of Richard Quinn – which is hoping to force him out sooner rather than later and install one of its own members as the new Speaker.

According to our sources, “the Quinndom” is grooming current S.C. Rep. Kenny Bingham for the role – and views the leaking of information regarding Lucas’ judicial ambitions as a central part of that strategy.

“They are at their most dangerous when they know what you want,” a lawmaker who has sparred with the Quinns told us.  “And they know what Jay wants.”

How will all of this play out?  We’re not exactly sure … but its clear this particular political drama will be worth watching as the 2016 session of the S.C. General Assembly gavels to order next month.