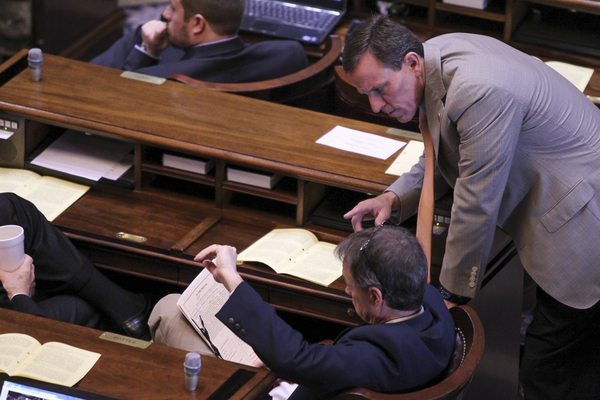 ANOTHER STATE LAWMAKER HAS A SERIOUS ETHICAL PROBLEM …

Not long after we mentioned him as a possible candidate for governor, special interest insider Todd Atwater of Lexington County, S.C. was mentioned in a so-called “investigative” piece by The (Columbia, S.C.) State newspaper.

The article – which has already drawn a rebuke from our columnist Taylor Brown – noted that since being elected to the S.C. State House in 2010, Atwater has maintained his position as the chief executive officer and president of the S.C. Medical Association (SCMA), a liberal lobbyist principal.

According to him, he built a “Chinese wall” between himself and the organization’s lobbying efforts – and sometimes “chooses not to vote when he thinks there is a conflict of interest.”

Great … because that’s exactly the sort of thing that should be left completely up to his discretion.

Atwater makes $400,000 a year from the SCMA – not counting benefits.  For those of you keeping score at home, that’s a whopping 16.7 times the Palmetto State’s per capita income.

So … how exactly does a state lawmaker get to double-dip as the head of an organization which lobbies himself and other lawmakers?

According to the S.C. State Ethics Commission (SCSEC), everything is on the level because Atwater made all of the SCMA’s lobbying employees contract workers – not full-time employees of the association.

This is exactly the sort of shady, self-serving scam that state lawmakers – and the special interests who bankroll them – habitually pull on Palmetto taxpayers (and then explain away or cover up).

No wonder this guy thinks he can be governor!

Enough is enough.  Todd Atwater needs to make a decision: He can either continue being the state’s top advocate for socialized medicine or he can continue being one of the S.C. General Assembly’s many fiscally reckless “Republicans.”  He should not be allowed to continue doing both.

In fact this is yet another example of the need for a fundamental rethinking of how state lawmakers are compensated/ regulated.

Will that ever happen?  Don’t be silly …

As long as there is money to be made on the backs of the poor and impressionable, South Carolina politicians and the interests which prop them up will continue finding creative ways to do so.