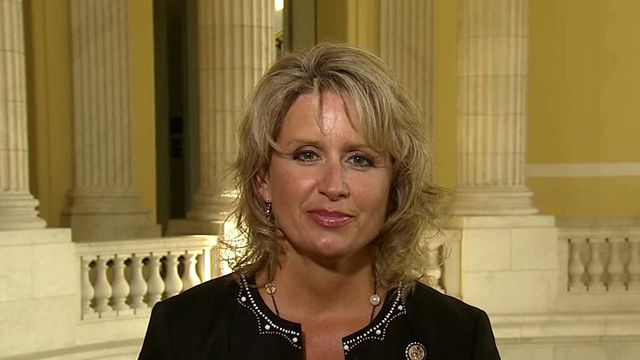 But is the liberal lawmaker literally giving it up as well?

As much as we’d prefer not to entertain that visual, that’s the takeaway from a report in RedState.com, which strongly insinuates that Ellmers and U.S. Rep. Kevin McCarthy of California are having “a relationship.”

Why does this matter?  Well, McCarthy was the odds-on favorite to replace liberal “Republican” John Boehner as the next Speaker of the U.S. House – until he abruptly withdrew his name from consideration today.

The conventional wisdom is that McCarthy’s candidacy became unacceptable to conservatives when he suggested a U.S. House panel investigating the Benghazi scandal – a panel chaired by U.S. Rep. Trey Gowdy of South Carolina – was more interested in causing political damage to Democratic presidential candidate Hillary Clinton than it was with uncovering the truth about the 2012 terrorist attack.

Is that the real reason, though?

Not according to the RedState.com story …

“There’s a guy out in America who has emails for a massive number of members of Congress and the email addresses of highly influential conservatives outside Congress,” the website reported.  “A few days ago, he emailed out to 91 people, including these members of Congress, an email with a series of links to stories alleging a relationship between (McCarthy) and (Ellmers).”

The “stories” in question were published by a website called GotNews.com.  In fact the website received a “cease and desist” letter from Ellmers office after one of its stories ran – with the congresswoman’s counsel telling the website the rumor was “indisputably false.”

Lending credence to the RedState.com report?  A statement released earlier this week by Ellmers’ North Carolina colleague Walter Jones urging any GOP candidates with “moral turpitude” issues to withdraw themselves from consideration in the upcoming leadership elections.

“I’m asking that any candidate for Speaker of the House, majority leader, and majority whip withdraw himself from the leadership election if there are any misdeeds he has committed since joining Congress that will embarrass himself, the Republican Conference, and the House of Representatives if they become public,” Jones wrote, according to Breitbart.

Whatever “relationship” Ellmers and McCarthy had, it is clearly strained.

According to The Hill, when asked whether she was supporting McCarthy’s bid for the speakership, Ellmers said “he has not spoken to me personally for my vote,” adding “I’m apparently not high on his priority list.”

Again, we don’t especially care what caused McCarthy to withdraw from the race – we’re just glad he’s out.  As we opined here, the GOP cannot afford to install another left-leaning liberal in a leadership position.

“The U.S. Congress cannot have yet another ‘meet the new boss, same as the old boss’ moment,” we wrote.  “Either it radically reinvents itself and starts representing its citizens again, or the Republic dies.”

Let’s hope the GOP selects a solid pro-freedom, pro-free market leader, not a clone of Boehner (who, it’s worth noting, was no stranger to alleged affairs).