WE DON’T … THAT’S THE POINT

It’s been twenty-nine years since lieutenant Pete Mitchell (a.k.a. “Maverick”) gave the one-finger salute to a Soviet jet pilot in the movie Top Gun.

Obviously, a lot has happened since then …

The Cold War has ended, although certain American military industrialists are clamoring to start another one … hence U.S. meddling in Ukraine, and Washington, D.C.’s apoplexy over Russian involvement in Syria.

Wait … what is Russia doing in Syria?

Glad you asked.  It’s attacking the Islamic State of Iraq and Syria (ISIS) – a.k.a. the monster of America’s making.

So … shouldn’t America be supportive of Russian’s efforts?  You know, since our government is in the midst of an undeclared thirty-year war with ISIS?

You’d think … but as with everything America’s military does abroad, “it’s complicated.”

As it stands now, American fighter jets are continuing to participate in a NATO air campaign over Syria – which is all the military industrialists could get after the American public didn’t fall for U.S. Senator Lindsey Graham‘s “we must invade” fearmongering.

How close are these U.S. warplanes to the Russian jets? 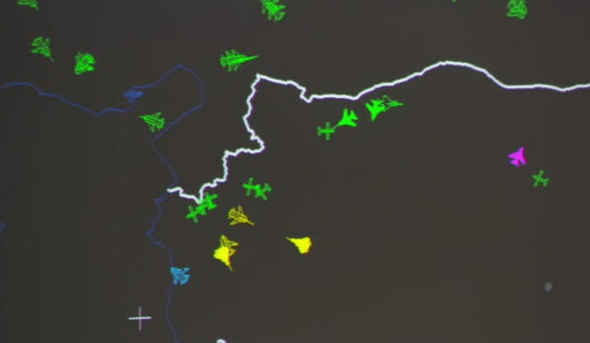 That’s less than twenty miles away.  And the Russian jets are even closer to unmanned U.S. drone aircraft.

We’ve said it before, we’ll say it again: The United States has no business meddling in Syria.  Our actions there and elsewhere in the Middle East are needlessly confrontational – and do more harm than good.

Our military assets should be assigned in defense of core national security objectives – not nation-building, not the defense of other nations and not wars of needless aggression.

#SCFlood: The “Fire Hose” As Seen From Space