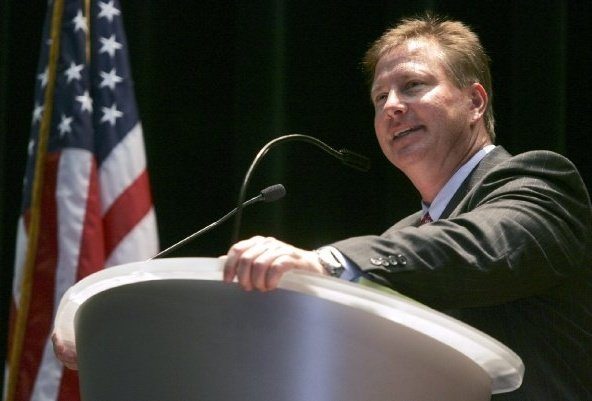 Florence County, S.C. was hit especially hard by “Floodmaggedon” this week – but the area’s top law enforcement official was nowhere to be found.

As the storm raged Kenney Boone – Florence County’s sheriff – had already left the state for a law enforcement all the way across the country.

In fact Boone was photographed departing for the National Sheriffs’ Association meeting in Tucson, Arizona just before 11:00 a.m. on Sunday – as the worst of the crisis was beginning.  Not only that, his smiling mug was posted to the Facebook page of Jared Bruder, the executive director of the S.C. Sheriff’s Association (who also made the trip). 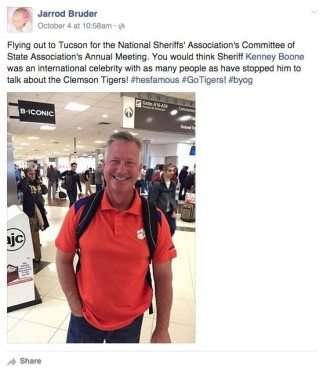 “Unfortunately this has turned out to be a quick trip,” Boone wrote early Monday.  “The severity of the flooding and sheer need in Florence County has caused me to cut this trip short and return home. While I’ve stayed in constant communication with my staff, my heart and mind are in Florence County and I feel that’s where I’m needed most.”

Florence residents are having none of it.

“He’s smiling in the airport leaving our state at 10:38 Sunday morning,” one told us.  “There is no way he didn’t have a clue that this was going to be bad.  Average citizens were hearing the news.”

The resident added that Boone’s “heartfelt” social media posts in the aftermath of the tragedy have been coming from staffers.

“I’m aggravated with the fact that our poor state (is) underwater and the citizens of Florence County have a Sheriff smiling on Facebook leaving our state for the week while people think he’s here updating heartfelt messages,” the resident said.  “His employees are upset because they are having to cover for him to make him look good.”

A lot of first responders distinguished themselves during the “Floodmaggedon” tragedy.  Kenney Boone was (literally) not among them, though.