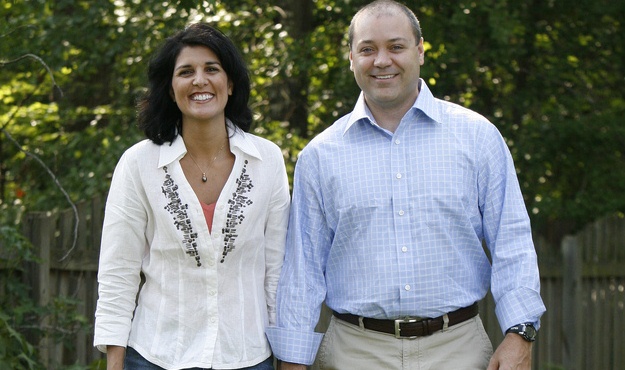 By FITSNEWS  ||  One of the most important myths this website shreds on a daily basis is the one about American soldiers “fighting for our freedoms.”  These days, nothing could be further from the truth.

So what was the governor’s “hero hubby” doing in Afghanistan?  Well, he sure as hell wasn’t fighting the Taliban.  In fact he wasn’t fighting anyone.  Haley was part of an irrigation effort aimed at “providing for the sustainability of Afghanistan’s water resources,” specifically “strengthening the capacity of the provincial level agriculture ministry’s ability to develop, execute, monitor and assess water management projects.”

Wait … what?  Yeah … this program (which reportedly cost U.S. taxpayers $10 billion) was all about trying to suppress poppy production (i.e. opium production).  It was a “War on Drugs,” in other words – an effort to force Afghan farmers to plant other crops.

Actually the figure quoted by the SIGAR report is $7.6 billion – although it’s not immediately clear whether this is part of (or in addition to) the $10 billion figure referenced earlier.

Either way it’s a ton of money that has been totally wasted … not unlike the $4-6 trillion America has spent on its wars in Iraq and Afghanistan since 2001.

“Afghan farmers grew an unprecedented 209,000 hectares of opium poppy in 2013, surpassing the previous peak of 193,000 hectares in 2007,” the report continued.  “With deteriorating security in many parts of rural Afghanistan and low levels of eradication of poppy fields, further increases in cultivation are likely in 2014.”

Of course according to SIGAR, it’s not the fault of the U.S. Department of Defense (DOD) – or of fine upstanding “heroes” like Michael Haley.

“The failure to reduce poppy cultivation and increase eradication is due to the lack of Afghan government support for the effort,” the report concluded.

Last time we checked, the failure was due to the free market explicitly rejecting these totalitarian efforts to force it into a counter-profitable direction.

Seriously … it’s ridiculous we’re fighting an anti-free market “War on Drugs” here in America, but do we really need to be fighting one in Afghanistan too?

Because both are expensive, abject failures …

Oh well, at least Nikki Haley got a ton of positive press out of the deal … that makes it all worth it, right?